While there are some dream jobs that have to be abandoned after a certain age -- like your plan to play shortstop for the Boston Red Sox -- many can be attained if you put the work in.

To land your dream job, though, you will need a plan. That means the process for getting where you want to go starts long before you have any chance of getting there.

At the most basic level you need to examine the job you want and make sure you have the basic qualifications. For example, if your dream is being a doctor on a cruise ship, that's not likely to happen if you don't get a medical degree.

One you have the basics down, there are a number of things you can do to tip the odds in your favor. Here are three from a group of Motley Fool contributors who all took different paths to landing their own dream jobs. 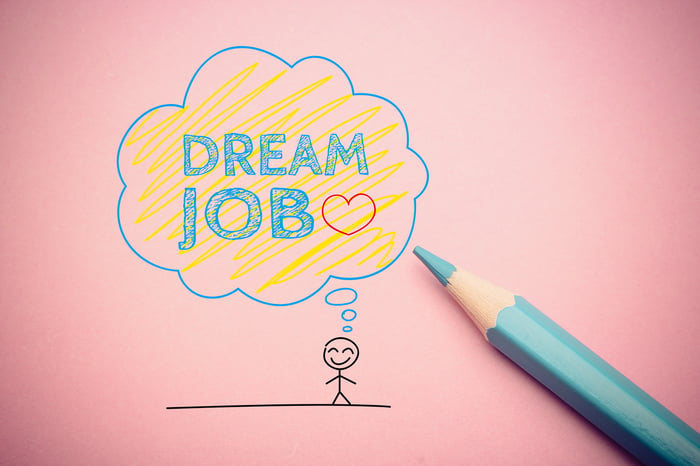 Have an open mind

Maurie Backman: Believe it or not, what I'm doing right now is my dream job -- and I got here by listening to other people's advice, taking feedback to heart, and keeping an open mind.

Though I'd done a fair amount of financial writing before joining The Motley Fool, this was my first opportunity to do so on pretty much a full-time basis, and while I was confident in my knowledge and writing ability, I made sure to pay attention to the feedback I received from my fellow writers and editors. It was their advice that really helped me hone my skills and understand how to succeed in my current role.

Some people have a hard time being told, or advised, what to do, but I've learned that there's a difference between constructive criticism and regular old criticism. The former can really be an eye-opening experience, and if you're willing to swallow your pride a little and accept that there are people out there who are smarter and more experienced than you, you stand to not only learn a great deal, but eventually land the perfect job.

Be prepared and be willing

Daniel B. Kline: While working for The Motley Fool has also become my dream job, my initial dream was different. Since I was a little kid who got up early to read the newspaper before school, I had wanted to work at my hometown newspaper The Boston Globe.

Over the years I had applied a bunch of times without success. Eventually I found a back door into the paper by landing an interview with its sister property Boston.com, for a job as senior producer for the website's business section. The position came with a desk in the Globe's newsroom sitting with its business staff, and attending daily meetings with its business editors.

To land the job, I went into the interview not just prepared to sell myself, but also with a detailed plan for how I would do the job. I mapped out my first 100 days and showed that I had not only studied the position, but I had a deep understanding of how it fit into the entire organization.

Once I was hired to fill a position that was essentially adjacent to my dream job, I not only delivered on my action plan, I also made myself useful to my new colleagues. That meant being willing to go above and beyond to contribute not just to Boston.com, but also to the newspaper. That was not a simple matter, but by being willing to do work others were not, I eventually became a regular writer for not just the secondary website, but also the main paper.

Do the job to get the job

Selena Maranjian: I'm still toiling at my dream job, more than 20 years after landing it. How did I get it? Well, I acted on some advice that has been well explained by Nick Corcodilos, of Ask the Headhunter fame. He said:

Don't behave like a job applicant in the job interview; behave like an employee. Show up ready to do the job in the interview ... show how you will do the work and contribute to profitability. By defining the work an employer needs done and showing how, exactly, you will apply your skills, you can demonstrate your value ...

I was applying to work at The Motley Fool, which was a young company that needed writers and editors to prepare content that could help individual investors manage their money and invest successfully. So I didn't just offer a resume; I offered some articles, too, so that those doing the hiring could better imagine me on the job, contributing to the company.

At another point in my life, when I was applying for a high-school teaching job, I shared sample lesson plans and student reviews so that those hiring could see what kind of teacher I'd likely be, and how well students might respond to my teaching style.

Every job is different, but if you spend some time thinking about just what a given company is looking for, you can stand out as an applicant by showing the company how well you can serve its needs.