Robots will take jobs formerly done by people, and that will hit the retail space pretty hard.

That does not mean an army of robotic workers will eliminate the need for humans entirely. Instead, jobs that can be easily automated will be, according to ZipRecruiter's Chief Economic Adviser Cathy Barrera in an email interview with The Motley Fool. ZipRecruiter, which was launched in 2010, started as a tool to help small businesses distribute job postings affordably. Today, according to the company, it's a "marketplace where millions of people across the U.S. and U.K. find a better job for a better life."

Barrera, a Harvard University-trained business economics Ph.D., noted in our exchange that routine tasks which are performed the same way each time will be the first jobs turned over to robots.

"Within retail, cashiers are one of the most susceptible careers at risk of being automated," she wrote. "This isn't necessarily news to Americans in the retail industry; consider the amount of self-checkout devices available at Target, CVS, and Costco, to name a few."

In addition, the rise of mobile ordering and payment pioneered by Starbucks (NASDAQ:SBUX) which has been adopted by many other chains takes work away from human workers. In the coffee company's case, however, those workers aren't being replaced -- they are being put into filling orders, allowing for faster production lines at its stores.

That makes sense for Starbucks given that limited space behind its counters means it can't add workers to meet demand. That, however, won't be the case for every chain, as in many cases robots and automaton will lead to fewer human workers.

"New technologies are being developed that will not only further erode the role of people in this task, but completely upend the way this task is executed," wrote Barrera. "... Amazon's (NASDAQ:AMZN) supermarket in downtown Seattle conducts business without a single human worker, and instead is reliant on its machine learning and AI capable technology service." 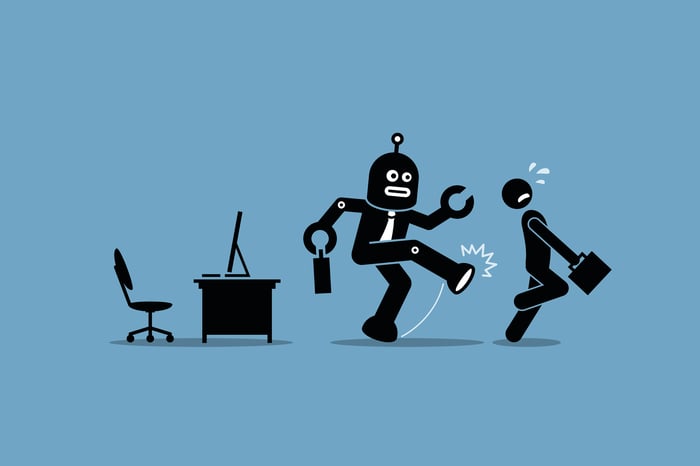 Robots will take some, but not all retail jobs. Image source: Getty Images.

This is not the end for retail workers

In the current marketplace, many retail workers are in greater danger of their company going out of business or closing locations than they are of robots taking their job. A healthy company like Starbucks or Amazon has the money to invest in automating tasks, while struggling chains likely do not.

"Many of the skills retail workers possess are currently in demand and will continue to be for some time, but I would encourage retail workers to use this time to seek out a different line of work to suit their lifestyle," wrote Barrera. "We don't think this is the end of the retail worker per se, but it's safe to say we are redefining the position."

It could end up better

Retail, Barrera wrote, has been an "immense security blanket to 1 in 10 of Americans," but the industry has had some major drawbacks. Most importantly, many retail jobs -- especially the type which will be automated -- have historically paid low wages while offering less-than-advantageous work hours.

The shrinking of brick-and-mortar retail, along with increased automation will mean fewer jobs in the space. That could ultimately be good news for workers, according to Barrera.

"What this means is that retail workers will be forced to look to other opportunities." she wrote. "We are optimistic that, as technology progresses and industries are disrupted the newly created job opportunities will be better than what came before."

That's a bit like saying getting divorced opens up your opportunities to meet someone better, but Barrera clearly has a glass half full mentality. She believes that what has been called the "Retail Apocalypse" creates an "an opportunity to improve the way we practice efficiency in the modern workplace and more importantly, set higher standards for which workers are valued."

Workers need to be proactive

While the rise of automation and robots won't be immediate or complete, they will eliminate jobs that traditionally went to lower-skilled workers. In the best-case scenario, these positions provided a doorway to a career as the employee gained skills and worked his or her way up.

With fewer jobs available to unskilled labor, workers will need to make sure they don't fit into that category. That means more schooling, looking for training options, or even moving into retail areas where people still dominate (a cashier may soon be eliminated by a robot, but a waiter probably won't be).

Needless to say, the job market is changing. While some retail positions will remain, it's important to get ahead of the curve so you have a position once automation becomes an even bigger reality than it already has.