Please ensure Javascript is enabled for purposes of website accessibility
Log In Help Join The Motley Fool
Free Article Join Over 1 Million Premium Members And Get More In-Depth Stock Guidance and Research
By Daniel B. Kline - Jul 19, 2017 at 6:20AM

Nearly everyone feels like a fraud sometimes, but there are ways to handle it.

At some point, nearly every successful person is in a position where they feel like they don't belong.

Perhaps you have to speak at a meeting being attended by senior leadership at your company or even top executives from around the industry. Maybe you got promoted to a position faster than most, or quite possibly you're just having a momentary crisis of confidence.

It's normal, and many people work their way through those feelings. However, for some people, this "impostor syndrome" can be debilitating. The phenomenon, which was formally named by American psychologists Pauline Clance and Suzanne Imes in 1978, is defined by its creators as "a feeling of phoniness in people who believe that they are not intelligent, capable, or creative, despite evidence of high achievement," according to The New York Times.

People with impostor syndrome "are highly motivated to achieve," but they also "live in fear of being 'found out' or exposed as frauds." It's a very real thing for those who feel it, and it can cost people their careers, or at least stall their progress. 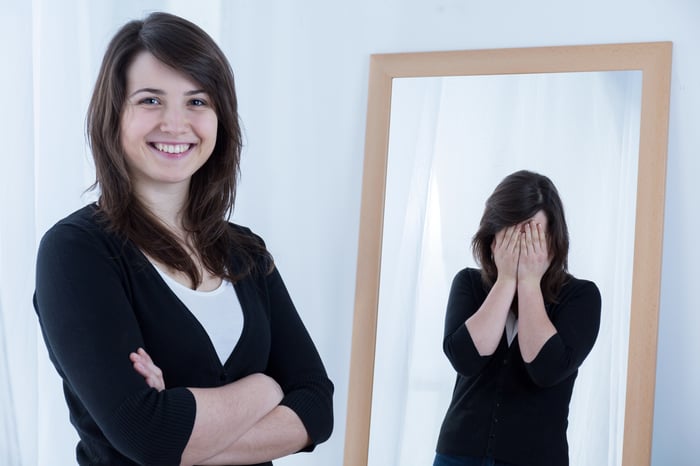 It's important to remember that even very successful people sometimes feel like they don't belong or that they have pulled the wool over people's eyes to get to their position. In a 2015 commencement speech at Harvard, an actress and graduate of that very same Ivy League university confessed her own feelings of doubt as a student, despite her many acting accomplishments. "I felt like there had been some mistake," she said, "that I wasn't smart enough to be in this company, and that every time I opened my mouth, I would have to prove that I wasn't just a dumb actress."

Starbucks Chairman Howard Schultz had similar feelings when he served as the coffee company's CEO, Psychology Today reported. "Very few people, whether you've been in that job before or not, get into the seat and believe today that they are now qualified to be the CEO," he said. "They're not going to tell you that, but it's true."

What do you do if you feel this way?

The first step in handling impostor syndrome is simply accepting that it's normal. Many people have moments of doubt, and very few people are fully prepared for whatever position they may find themselves in. Acknowledging that your fear is both real and common may in some cases help you move forward.

For those who need more, psychologist Carol Dweck suggests focusing on what you're learning, not how you are performing, according to Harvard Business Review. That changes your mindset from worrying about your own potential limitations to instead seeing your progress and how you've grown from mistakes.

Lastly, it's important to recognize that you are almost certainly not the only person feeling this way -- not in a broad sense, but very specifically in whatever work situation you find yourself in. A 2015 survey by Vantage Hill Partners exposed that the biggest fear of top executives is being found incompetent.

It was an over-the-top performance that parodied self-help gurus, but the message at its heart rings true. Most people feel like they are faking their way through life. Another Saturday Night Live icon, Tina Fey, explained her feelings on impostor syndrome to The Independent in 2010:

Ah, the impostor syndrome!? The beauty of the impostor syndrome is you vacillate between extreme egomania and a complete feeling of: "I'm a fraud! Oh god, they're on to me! I'm a fraud!" So you just try to ride the egomania when it comes and enjoy it, and then slide through the idea of fraud. Seriously, I've just realized that almost everyone is a fraud, so I try not to feel too bad about it.

If the creator of 30 Rock and a comedian-turned-senator feel impostor syndrome, it's not only normal that you do; it's something you should expect. To combat it, sometimes it's just a matter of telling yourself you belong and doing the best job you can. That may not be easy, and some may need professional help, but for many of us, just accepting that impostor syndrome impacts many people can help stop it from hurting our careers.