Please ensure Javascript is enabled for purposes of website accessibility
Log In Help Join The Motley Fool
Free Article Join Over 1 Million Premium Members And Get More In-Depth Stock Guidance and Research
By Daniel B. Kline - Updated Jul 24, 2017 at 7:44PM

Sometimes getting ahead is all about who you know.

Every person you meet in both your professional and personal life might be the one who makes a key introduction for you later. That makes doing the groundwork of networking one of the most important things any person can do when it comes to advancing their career.

If you're outgoing and unafraid of introducing yourself to strangers, making connections and networking may come naturally for you.

But if you're shy or a bit introverted, it can be a painful process. Even so, it's still important: You have to find ways to put yourself out there and create the network that may someday help you get where you want to go. 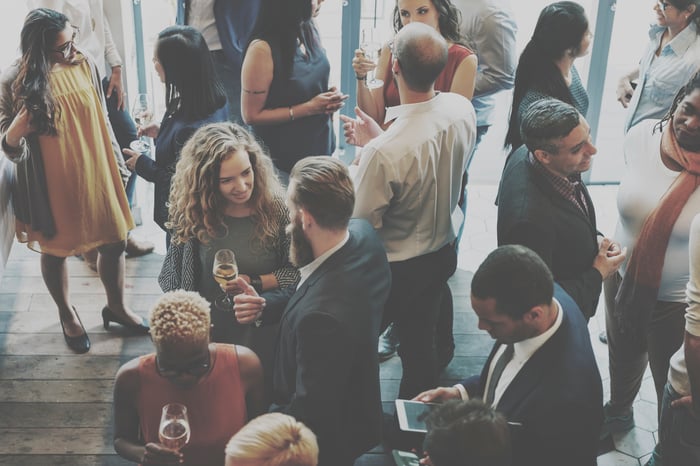 Whether it's a cocktail party or a formal industry event, it's important to meet people and build a network. Image source: Getty Images.

Networking goes beyond just meeting people. It's the process of creating a far-flung group of contacts that will theoretically help you advance your career. Creating that network involves connecting with people, and forging a bond that's a bit deeper than just having them know your name.

In my early career when I traveled to trade shows, I took pictures of every person I spent time with (with an actual camera). Each night I made notes on the person, writing down some highlights of our conversation. If he or she had kids, liked the Red Sox, or was traveling to France, I made note of it in order to build the connection by having that personal knowledge at hand for the next time we met.

What can networking do for you?

Would you rather walk into a room where nobody knows you or walk into one where an acquaintance introduces you to a few people? Even if you still have to meet a lot of strangers, having a few warm contacts makes everything easier.

Some people may not genuinely love helping others, but most like being a hero. If someone in your network knows you are looking for a job and can recommend you to someone who needs to hire someone, that person becomes a hero to two people. Of course, some people do just want to help, and having them in your network can give you an advocate when you most need one.

Networking can be the difference

When many jobs come open, the person doing the hiring gets inundated with resumes. In many cases, more than a few people applying have the requisite qualifications, at least on paper.

If someone in your network knows the person doing the hiring, or even someone at the company, he or she can put a word in for you. That won't get you the job, but it could get you an interview and at least a chance to sell yourself. In addition, if you and another candidate grade out similarly, the hiring person may go with you because of the indirect personal connection.

My biggest professional regret is that for the first 15 or so years of my now 24-year working life I did a bad job of keeping up with my connections. I networked plenty and met a lot of people, but in the days before social media, I let many of those connections slip away.

Now people have fewer excuses because technology makes it easier to keep in touch with people. Once you meet someone you can keep up the networking by engaging in an appropriate digital conversation. That has to be more than just sending a birthday greeting because Facebook tells you to. In general, it means sending a thoughtful message or even picking up a phone a few times a year to maintain the actual connection.

This is where the value of networking can increase exponentially. There's a difference between someone having vague, fond feelings for you and him or her knowing you well enough to pick up the phone or send an email for you.

The broader your network, the easier your career will be. As you get more experienced networking become a two-way street as you will be able to help both younger people and those who once helped you.

If you choose to not network or let your relationships wither, you make your career harder and will likely lose out on opportunities. Building and nurturing your network may be the single most important thing (aside from being good at your job) in your working life.

Do it well and everything gets easier, more doors open for you, and more opportunities come your way. Fail to network well and you will see things you want go to other people as you say "if only I knew someone who could make an introduction."