Landing a job isn't just a matter of putting together a solid resume and hoping your experience speaks for itself. Rather, you'll need to get through the interview process if you want a shot at an offer.

Now different companies approach interviews differently. Some, for example, might have you participate in a series of phone screens before finally sitting down with a hiring manager. Others might bring you in for a day of back-to-back conversations with your entire prospective team. No matter the scenario, it's imperative that you approach the interview process feeling confident and prepared, and with that in mind, here are a few potential curveballs to be aware of. 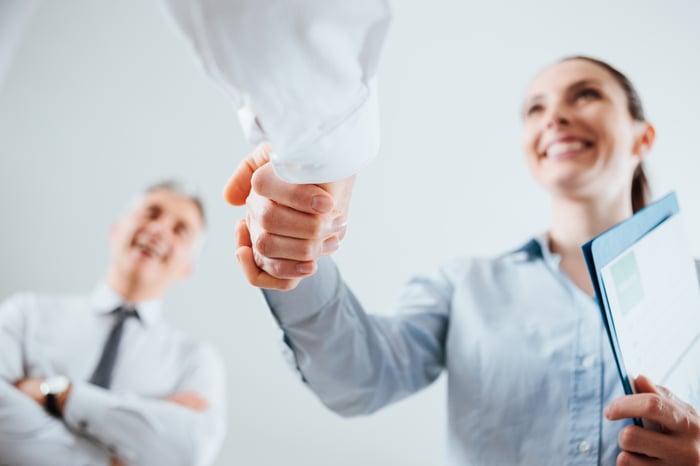 Though some companies make it a policy not to talk money early on in the interview process, you may find yourself in a situation where you're asked to confirm your salary requirements before you're really ready. And it's a tough spot to be in, because if you ask for a salary that's lower than what the company is thinking, you'll wind up selling yourself short. On the other hand, if you aim too high, you'll not only come off as greedy, but potentially negate your chances of getting an offer in the first place.

So here's a better approach. First, do your research and see what other people in your role are making at their jobs. Sites like Glassdoor and Salary.com can help you access compensation data based on your industry and geographic location. Gather some figures so that you have a basic sense of what you should be asking for.

Next, answer the question with a salary range rather than a hard number. For example, if the median salary for your role in your area is $80,000, but you're willing to accept an offer that's lower, offer up a range of $70,000 to $90,000. This leaves a decent amount of room for negotiation while giving your interviewer a basic sense of what you're looking for.

Here's another potential no-win situation: the "describe your greatest weakness" question. If you answer openly and unveil your shortcomings, you'll give your interviewer a good reason to think poorly of you. If you claim not to have any character flaws, you'll come off as conceited and insincere. Either way, the result is the same -- you may not get the job.

Rather than avoid the question, or come up with a lame, eyeroll-inducing answer like "I put too much of my heart into my work," respond truthfully, but show how you've already succeeded in learning from your mistakes. Say your greatest weakness is your inability to manage your time, which, in the past, has impacted your performance. If you describe to your interviewer how you've taken steps to overcome that flaw -- say, by learning a new project management software to track your progress -- you'll highlight the growth you've achieved. And if there's one thing interviewers like, it's signs of personal development and growth.

3. The interviewer who's the world's worst conversationalist

While your skills will ultimately play a big role in determining whether you're hired for a particular job, your personality will also be a factor in the decision. So what happens when you get stuck in a room with an interviewer who's virtually incapable of carrying on a conversation?

It happens more often than you'd think, and worse yet, when it does, the person conducting the interview usually isn't aware of just how difficult he is to talk to. If you're struggling to keep up your end of the discussion, you can fight back by asking questions whose answers, by nature, aren't just one-word responses.

For example, if you're talking to someone who manages the company's database, you might ask how well the current version is equipped to handle scalability. Or, you might inquire about upgrades in the works. But if you simply ask your overwhelmingly dull interviewer whether the company database is buggy, he might respond with a simple "yes" or "no."

Better yet, if you're given the names of the people who are scheduled to interview you, do some digging and come up with questions based on their skills and experience. Don't be afraid to access their LinkedIn profiles to see what they did before joining the company you're interviewing at. The more you know about your interviewers, the easier it'll be to maintain a flowing conversation.

Nobody wants to get caught off-guard during an interview. The more you prepare in advance, the better positioned you'll be to handle even the most daunting curveballs that come your way.