Please ensure Javascript is enabled for purposes of website accessibility
Log In Help Join The Motley Fool
Free Article Join Over 1 Million Premium Members And Get More In-Depth Stock Guidance and Research
By Dan Caplinger - Jul 30, 2017 at 7:45AM

Last week, Democrats announced an economic plan that Sen. Chuck Schumer (D-N.Y.) referred to as "a better deal for American workers." The proposal included a number of provisions, including calls to provide family and sick leave, cut prescription drug prices, and offer worker training. Also included was a call to raise the national minimum wage to $15 per hour, which has been proposed in the past. The intent is to give all workers a high enough wage to meet basic living costs.

The minimum-wage debate has been contentious for years, but thanks to the efforts of the Pacific Northwest's biggest city, there's empirical data on the impact of having a $15 hourly minimum wage on workers and businesses. A recent working paper released by the National Bureau of Economic Research looked at what's happened in Seattle since it passed a law gradually pushing the city's minimum wage to $15 per hour, and the results were troubling for those who think higher minimum wages automatically mean better results for workers. Yet some have called into question the assumptions and methodology the researchers from the University of Washington used, citing other evidence that shows the success of higher minimum wages in other cities. 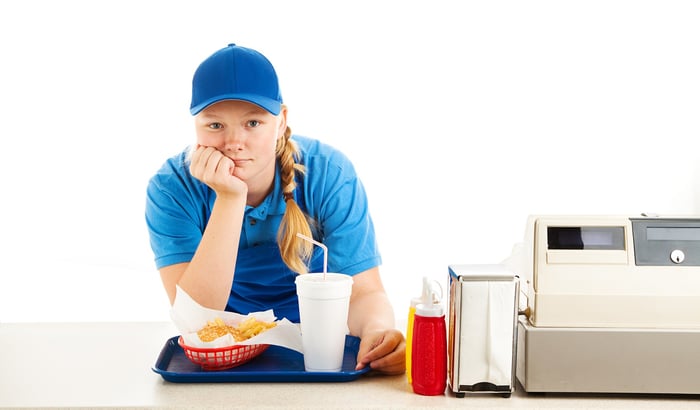 What happened in Seattle

The study looked at the 2015 and 2016 wage increases and evaluated their impact on the local job market using employment data collected by the state of Washington. The working paper's findings included that the number of hours worked by low-wage workers following minimum-wage increases declined more substantially than previously expected, and the number of low-wage jobs available also fell. Even when you factor in the upward impact of higher hourly wages, the net impact was negative.

The researchers seemed surprised by the results, citing previous research that had suggested a far smaller impact to workers. They considered factors unique to Seattle but concluded that they shouldn't have had a major effect on the analysis. The study also noted that it considered only employers that report workers in a specific location, leaving out the massive number of employers that have multiple locations. The research didn't consider labor movements outside the city of Seattle, and some employers might have chosen to shift work elsewhere because lower labor costs were available. Nevertheless, with all those caveats, the study will be a key piece of evidence in future debate on national minimum-wage laws.

It's troubling that so many policymakers will take the University of Washington minimum-wage study and attempt to extrapolate its impact nationally. The study itself notes, "One cannot assume our specific findings generalize to minimum wage policies set by other localities or at the federal or state level," pointing out that characteristics of the local economy and labor force lead to disparate results in different places.

Critics of the Seattle study have raised other objections. Researchers at the University of California at Berkeley did their own analysis of Seattle's wage changes, using a different model that included a control group in surrounding areas and other factors intended to make the findings more broadly applicable to low-wage workers. The Berkeley study found that rising minimum wages didn't lead to less employment, with an especially strong positive impact on limited-services restaurants such as fast-food chains.

Perhaps most importantly, localized minimum-wage changes have a clear disadvantage compared with a nationwide minimum wage: They allow larger businesses to make strategic choices to avoid high-wage areas. Companies could choose to avoid the entire U.S. market in response to a national minimum-wage increase, but for many employers, a uniform nationwide increase would remove the current incentives for businesses to locate in lower-cost areas over higher-cost ones.

What to expect on the minimum-wage front

Lawmakers rarely take the time in their debates to go deeply into the analysis underlying the study findings they assert as facts. As we've seen on issues such as tax reform, with competing studies supporting different views, the discussion among opponents often devolves into partisan reliance on the studies that fit best with each side's arguments.

The minimum wage has been a contentious issue between the two main political parties for a long time, and the Democrats' latest economic platform is nothing new to those who've followed that debate. With many other cities and states implementing or looking at minimum-wage increases, there'll be plenty of fodder for further research in the years to come.