Please ensure Javascript is enabled for purposes of website accessibility
Log In Help Join The Motley Fool
Free Article
Join Nearly 1 Million Premium Members And Get More In-Depth Stock Guidance and Research
By Daniel B. Kline – Aug 11, 2017 at 6:02AM

When it's time to find a new position, make sure you don't fail before you've even started.

While it's tempting to apply for any job you see that would be better than the one you have or get you off the ranks of the unemployed, there are steps you need to take before applying.

If you act quickly, without planning, your results will likely be bad. That can actually create a double whammy where you not only don't get hired, but you burn a bridge as well, making it hard if not impossible to ever get hired at that company.

Before you start applying for a job, it's important to get your house in order. That's not hard to do, but it's essential if you want to maximize your chances of getting hired. 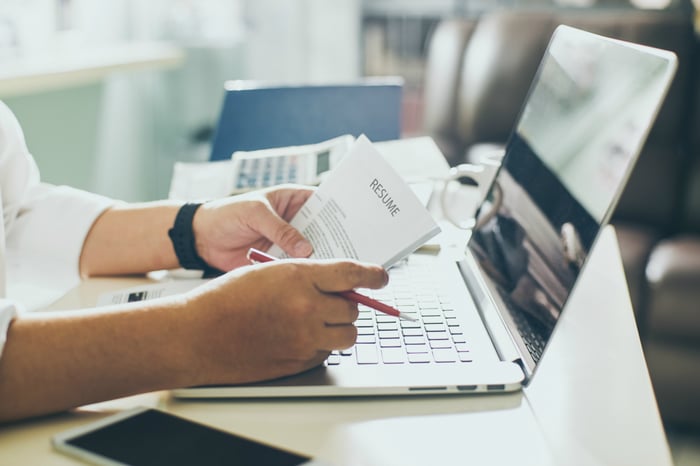 Make sure your resume has been checked over by an expert. Image source: Getty Images.

Get your resume(s) and cover letter(s) ready

Nearly any job you apply for requires a resume, and many will need a cover letter. Before you begin applying you will want to make sure you have a base version of each that's in line with current industry styles. Resume formats change over the years and vary by industry. It's generally best to either hire a professional to fine tune yours or at least research what format others are currently using.

You will also want to have a skilled copy editor go over both your resume and cover letter. That's a little more challenging with the cover letter because that document should be modified for every job you apply for. Time constraints may not make it feasible to have each version copy edited, but at least work from a base which has been and write in a word processor, which will prevent spelling mistakes.

Clean up your social media

Monster.com recently ran an article which perfectly described how the job search process works for both parties:

On one side, there's you: a hopeful job seeker Googling everything and anything you can find out about your dream employer. And on the other side is your potential employer who can now look in every nook and cranny online to learn all about you.

Just as you might shy away from a company with lots of negative reviews on job sites, the company might be wary if your social media has nothing but drunken party pics. Realize that anything online may come back to haunt you and make an effort to sanitize your social media presence. Basically, if you wouldn't want a conservative mom to see it, try to take it down or get it removed.

Be ready to interview

As a 43-year-old man, I own a reasonable amount of suits and other dress clothes (despite generally working in gym shorts and a Star Wars T-shirt). In my 20s, however, I did not always have an interview-appropriate suit. That once led me to wear a wool suit to a summer interview, which, when you added in a subway ride, helped me deliver a sweatier-than-desired appearance.

Before sending in a job application, break out your interview attire. You likely need at least two appropriate outfits, and it's important to make sure they fit and are seasonally appropriate,

Having managed a lot of people over the years, I've given a lot of references. In most cases the person hoping I would endorse them gave me a heads up. When they did not, it sometimes resulted in me getting a call about a person I did not have fond memories of. Had the person called I would certainly have suggested they use someone else.

Before applying for a job, line up at least three references. Let those people know and make sure the person actually wants to do it. With their permission create a reference sheet with names, phone numbers, emails, and how you know the person. In general, include at least one past boss, a colleague, and a character reference who did not necessarily work with you.