It's not uncommon to experience work-related woes from time to time. Maybe there's a colleague who gets under your skin or a project that keeps hitting snags. But there's a difference between the occasional bout of dissatisfaction and being downright miserable on the job. Unfortunately, more than half of U.S. workers say they're unhappy at work, and given the amount of time many of us spend at our jobs each week, that's a terrible situation to be in.

With that in mind, we've assembled some tips from our happiest workers to show that it is possible to enjoy what you do while simultaneously collecting a paycheck. Whether you're stuck in a rut or like your job but want to be further inspired, here's what some of us have to say about striking that ideal balance. 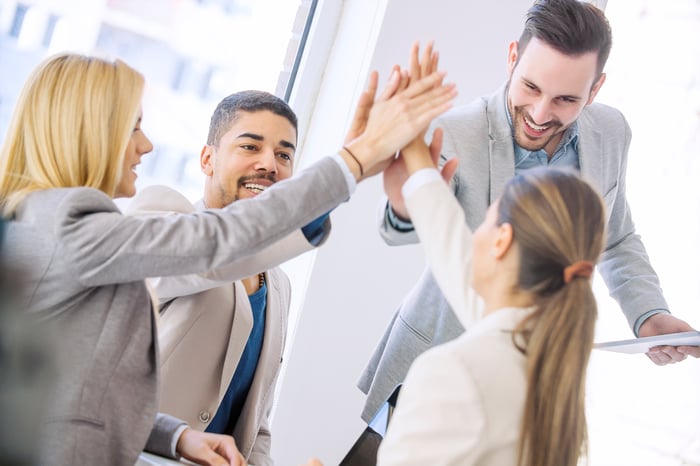 Daniel B. Kline: Over the course of my nearly 25 years in the work world, I've taken jobs for fun, for passion, and sometimes for money. In the short term, sometimes a job that pays well can make you happy, but in the long run, you have a much better chance of achieving long-term financial success if you pursue passion and fun.

Sometimes, finding happiness at work means taking risks. I love my current job as a contract writer for The Motley Fool. I work where I want, when I want, and I get to write pieces like this with colleagues I both like and admire. I rarely feel like I'm working, and I've never been happier in a "job" situation that has proven to be financially rewarding.

Getting here, however, involved accepting that money did not equal happiness. To start writing regularly for the Fool, I walked away from a reasonably well-paying job editing two local newspapers. I also passed up on positions curating content for major technology companies and a few other better-paying, more secure offers.

I came to be a full-time freelance Fool with no promises other than that my then-editor thought I had the ability. It was a risk and failure was an option, but passion for the work translated into working hard, which led to success. That's not always the case. An earlier attempt at a work-from-home freelance lifestyle failed earlier in my career, partly due to the market and perhaps because I was not yet ready.

Finding true work happiness required taking a risk. Even if that had not worked out, I'd likely have never been happy in a traditional job and probably would have continued to sacrifice short-term wealth in an attempt to find long-term bliss.

Drive your own happiness

Selena Maranjian: How happy we are at work is, to a great degree, out of our control. Our employers often set the tone for the workplace, and they're the ones who treat and pay us fairly or unfairly. A toxic workplace or a toxic boss can easily make us miserable.

Still, there's a lot that is under our control, and there are many ways that we can set ourselves up to be happier at work. For starters, while some rightfully point out that money isn't everything, it's far from meaningless. Feeling underappreciated and undercompensated can lead to unhappiness at work. You can try to boost your income by asking for a raise and working to deserve one.

Failing that, consider looking for another job, within your current company or elsewhere. In some cases, another career might be the best move. A 2010 study from Princeton found that more money does boost happiness -- until you're earning $75,000. In today's dollars, that would be about $84,000.

Here are some other suggestions: Aim for a healthy work-life balance, as feeling that you're devoting too much time and energy to one while shortchanging the other can be discouraging. Also, try to get a job that gives you some degree of autonomy to make your own decisions and plan your own time. Ideally, it will be in a workplace where you get along well with your colleagues, as a pleasant social setting at work can go a long way toward feeling happy. Keep learning and growing, too, as acquiring new skills and taking on new kinds of tasks (such as public speaking via presentations) can help you feel more challenged and engaged. These new skills and knowledge can also help you advance in your career.

If you can't make your work situation a sufficiently happy one, consider moving on to another job where you can be happy. After all, you only get one life, so make it as good as you can.

Maurie Backman: I've always wanted to be a writer, but spent years in the finance world because of the paycheck it offered. The work I was doing during the day, however, wasn't anything I'd ever consider doing just for fun, in my free time.

On the other hand, once I started writing full-time, I came to realize that even if I were to become independently wealthy, I'd still continue doing it (though perhaps not for quite as many hours each week). The same holds true for a lot of people I know -- they're genuinely interested in their work to the point where they really don't consider it "work" in the classic sense. In fact, many of my friends and associates attend conferences in their respective industries on their own time and dime, and they do it not just to grow their careers but because they're passionate about what they do and want to keep learning.

It's one thing to get stressed out at work because of an upcoming deadline or to be unhappy with a certain aspect of your job. But if your core responsibilities are ones you don't find enjoyable or fulfilling, it's time to move on to a different position or maybe even a totally different field. You owe it to yourself to be happy on the job, and if you're willing to take some risks and make some compromises, you can get there.