Hard work is a big piece of the puzzle, but there's more to it than that.

Some companies, generally the very large ones, have formal programs through which interns might get offered full-time jobs. In many cases, though, where no specific path from internship to full-time job exists, you have to forge your own path.

In all cases, there are ways to increase the chances your internship turns into a job. The key, and it can't be stressed enough, is that you have to do an outstanding job. That sounds obvious, but you'd be shocked how often I've had an intern do a mediocre job filled with random absences who then expected to be hired.

Beyond just performing well, there are a number of steps you can take to increase your chances of landing the full-time gig. These won't guarantee you get hired -- sometimes there's just no opening -- but if you follow them, your odds will improve. 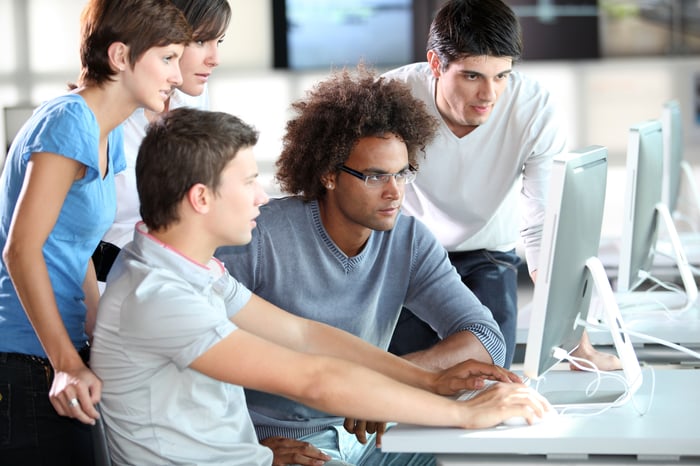 Not every intern is going to get a job offer. Image source: Getty Images.

1. Learn more than your job

Over the years as a newspaper editor and a small-business owner, I've had a number of interns. The good ones did the tasks I placed in front of them well. The great ones did that while also finding their way into other projects.

Sometimes that meant simply being around for support when nights grew long because of one emergency or another. Sometimes it meant asking to take on another task or volunteering to learn a job so somebody else could take a day off. In all cases, a willingness to learn new tasks -- even ones well outside your core competency -- increases your chances of getting hired.

About three years ago, my then-business partner and I had two interns. One did a very good job in an area where we had a number of people who were high performers. He was a nice guy and a hard worker. We wanted to hire him, but he didn't fill a need for us.

Our second intern saw that our existing team had some weaknesses, and that left him an opportunity. He wasn't more skilled than the first intern, and we liked both of them, but intern No. 2 went out and learned how to do something for which we had nobody else. We hired him because he proved not only that we had a need, but that he could fill it.

At a small company or as part of a small team at a bigger one, the edge goes to the person the boss or bosses like being around. That may not give you an edge over a truly superior performer, but it will help you stand out from people whose performance is close to yours.

At a company that doesn't have a formal process through which offers are extended to interns, make your desire for a full-time job clear. I recommend asking your boss about halfway through the internship what you can do to earn a job offer.

You may not like the answer you get, but letting your intentions be known may cause your boss to make an effort to find an opening. That can take time, and if you wait until the internship ends, you may miss out on the opportunity.

This is not possible in every field or at every company, but in general, if you can find a way to bring in enough revenue to justify your salary, then you will be offered a job.

Being a marketing or sales intern may involve landing a new client or finding some other way to create cash. In my previous example, an editorial intern created content for my former company in an area we had neglected. His work unlocked a missed opportunity for us and showed how we would profit having him on full time.

Not every well-liked intern gets a job offer at the end of his or her internship because sometimes there's no job to be had. That was the case in my most recent newspaper job, as a reporting intern finished her internship when she graduated. We wanted to hire her, but we had a set staff and had nothing to offer her.

She made a point of staying in touch and taking whatever freelance work we could offer (which not much and for not much money). When a reporter left, hiring her was a formality. Had she not stayed in touch, she may have lost out to the latest intern or another candidate.

In my first real-world job -- not actually an internship in name, but more or less one in practice -- I was willing to do anything needed. I worked as an editorial assistant on one magazine, but when my day was done I walked around to the other editors in the room and asked if they needed anything done.

Sometimes that resulted in having to get someone a cup of coffee. In other situations, they had actual work that needed doing. I took whatever assignments were offered and got to proofread, write news items, and help write some television-like programs.

Doing that not only increased my skill base, but it also created more opportunities for when I wanted an actual job. When one did open, after the editor of the magazine I worked for was fired, it wasn't such a leap to hire me, despite my being a 20-year-old college student, because I was a known quantity.

Charm and skill can get you a long way. Adding a tireless work ethic and a willingness to do whatever needs doing can increase your chances of going from intern to employee.