Continuing education has evolved from the days when it consisted mostly of less rigorous classes aimed at retirees or others looking to pursue a hobby. Those courses were were generally less academically rigorous and did not lead to a degree or a specific skill that would help in the workplace.

Today's continuing education has come to mean much more than that, according to University of Washington (UW) Continuum College Vice Provost Rovy Branon. In his job, Branon oversees a program that offers what he described as "innovative learning paths and now serves more than 50,000 students a year in Seattle and around the globe." He answered question from The Motley Fool via email.

"Modern continuing education is much more," he wrote. "Students over the age of 24 are now the majority in higher education, and their needs are different." 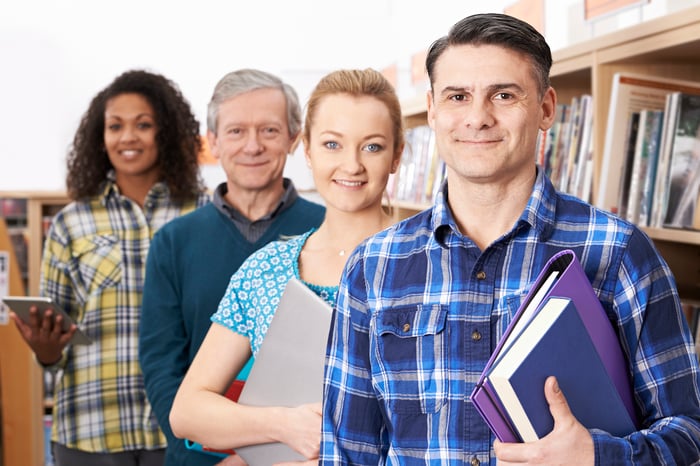 What is continuing education now?

Continuing education today has, according to Branon, has become a much more practical endeavor. Schools, he wrote, have begun "offering specialized versions of campus degrees tailored for professionals, including online programs." The most important change, he added "is that those old non-degree 'enrichment programs' are giving way to a far more flexible and essential form of higher education."

In some cases, this means non-traditional paths to a a degree, a certification, or an advanced degree. In other cases, classes help students gain a skill that's theoretically going to help them get a better or different job.

"Non-credit programs (sometimes called 'professional credit') are exploding in growth as a means to rapidly acquire high-level, in-demand job skills," he wrote. "These programs are shorter in duration than a degree and they are designed to advance your career in the field you're in today or help you make a move into a new space if you're in a field where jobs are disappearing."

These aren't the easy-learning-for-the-sake-of-learning classes of old. Instead, Branon explained, this "new breed of continuing education non-credit program is tied directly to workplace competencies, and quality is tightly monitored."

Whom can continuing education help?

"The people who stand to gain the most from continuing education are those in the 'middle space' -- post-graduates and those immersed in their working years," Branon wrote. "Those are the people who we're seeing drawn to dip in and out of higher education throughout adulthood.

The reason for that is at least partly the rapidly changing work world. Even someone with a good job may need to learn new skills to stay current. Branon noted that tech-based project management has been in high demand, coupled with data skills involving analytics, science, machine learning, and big data.

It's different for everyone

A non-degree program obviously can only accomplish so much. Some fields require specific degrees, and you can't get hired without the right four-year or advanced degree. In many cases, though, for people looking to move into jobs adjacent to their current fields or those looking for work in fields where possessing the right skills, not having a specific degree is the measuring stick.

"For example, a certificate in storytelling or social media can help bridge the gap in a skill set of someone who's been in a field like HR or sales for a bulk of their career and realizes they need a leg up in that space to stay fresh and competitive with newer hires who are almost all digital natives," Branon wrote.

Branon's program matches students with coaches who help them design an education plan that gets them to the job they seek. In addition, UW plans to launch what he called a "Career Accelerator" program, with certificates outlined by competencies required for jobs in different formats.

Branon also added that these classes are rigorous, with about 20% of those who enroll not finishing. That's better than the 59% of students who begin a four-year degree and complete it within six years, according to the National Center for Education Statistics, but it's enough of a failure rate to show that continuing education is no longer the cakewalk it once was.

Part of the reason about 80% of people who enter continuing education programs at UW finish is that academic coaches help prospective students figure out whether they actually can commit to the program. This process includes examining their existing work and home responsibilities.

"Think of a continuing-education course as a part of your job," Branon wrote. "It requires time and focus, and it's not just cognitive energy; it's also emotional energy."

Is Going Back to School Right for You? @themotleyfool #stocks Next Article
Current