Perhaps you're tired of being bored on the job. Or maybe you've had enough of waiting for a promotion that's yet to come your way. If your career isn't taking off the way you hoped it might, the idea of going to back to school for an advanced degree might hold some appeal.

Of course, the decision to go back to school isn't always borne out of career-related dissatisfaction. It could be that you're extremely happy with your job, and simply want to take it to the next level. But before you start filling out graduate school applications, you may want to consider the drawbacks of once again becoming a student -- as well as a host of alternate solutions that give you the same results. 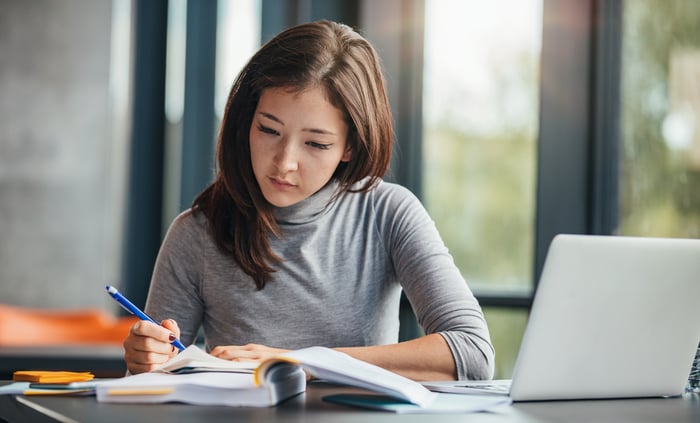 Graduate school: Worth the cost?

The average cost of master's degree is between $30,000 and $120,000, according to FinAid.org. Of course, that's a pretty wide range, and your actual costs will vary significantly depending on the degree you pursue, the school you attend, and your living arrangements during that time. The point, however, is that you'll probably spend a significant amount of money in pursuit of that degree, so unless you're absolutely convinced you'll be able to recoup the costs involved in a reasonable time frame, you may want to come up with a different solution.

Say you're tired of spitting out low-level copy at a marketing firm, and decide to pursue a Master of Fine Arts to elevate your writing skills. If that degree costs you $90,000, but only results in a $3,000-a-year salary boost, you'll essentially spend the remainder of your working years struggling to break even.

On the other hand, if you sink $125,000 into your MBA, but immediately get a job where you're earning $30,000 more per year, that's a pretty solid return on investment. There are plenty of circumstances where graduate school is worth the cost, but if you don't work in a particularly high-paying industry, or aren't looking at a sizable salary bump, then that degree probably isn't worth the expense.

Furthermore, think about the logistical and emotional implications of accumulating more student debt. In a recent survey, 37% of 18-to-35 year olds said they regretted going to college given the amount of debt it caused them to take on. If you've reached the point where you've finally paid off your undergraduate degree, you may want to take a step back and consider the way another batch of debt might cramp your lifestyle.

Other avenues for building skills

There are some situations where going back to school absolutely makes sense. Say you want to practice as a social worker, but can't do so without a master's. In that case, by all means, get that degree. Otherwise, you'll never get to do the thing you want to do.

On the other hand, if your goal in going back to school is to advance your skills within your current field, you may have other less expensive options for achieving that objective. You might, for example, pursue a low-cost online certification, or convince a friend or colleague to serve as your mentor and help you boost your knowledge. You can also ask your company for permission to shadow a more senior-level employee to gain some of the skills and insight needed to get ahead in your field.

Say you're an IT professional hoping to snag a management position. You might think that getting a master's will help your career, but if your technical skills are already in place, you may just need a little help working on your interpersonal skills -- in which case having an existing manager serve as your mentor could very well suffice in helping you take your career to a better place.

One final thing to consider with regard to going back to school is the idea of becoming a student again, and adjusting to the lifestyle that comes with it. Forget about money for a second, because you'll obviously have less if you stop working for several years and start paying tuition. Rather, think about whether you can truly readjust to the student mentality. If you've been working for, say, 10 years, and aren't used to the idea of studying and doing homework, then going back to school might put you in a situation where you're out of your element and less happy for it.

While going back to school is the right move for some people, it's not necessary for everyone. If your future earnings won't justify the expense of your degree, and you have other (free) options for building your skills, it pays to put your graduate school plans on hold indefinitely, or at least until you've explored other avenues for getting to where you want to be.