Whether you're looking to break into a new career or grow your current one, you may be toying with the idea of getting your MBA. Like any other advanced degree, an MBA could open the door to a world of new opportunity. Once you have those three letters next to your name, you may find that you're offered higher-level positions at salaries that put your current compensation to shame. But before you take the plunge and start filling out applications, you'll need to think about whether that degree is really worth pursuing.

It's unlikely to come as a shock that MBAs can be expensive, but you may be surprised at just how much you stand to spend. According to U.S. News & World Report, in 2016, the average cost of tuition among the top 10 business schools in the country was over $125,000 for a two-year MBA program. And that's just tuition. If you're forced to relocate to attend a top university, you might spend considerably more on housing and the like. Of course, not every school costs quite as much, but you should still be prepared to spend a bundle on tuition for a two-year degree. 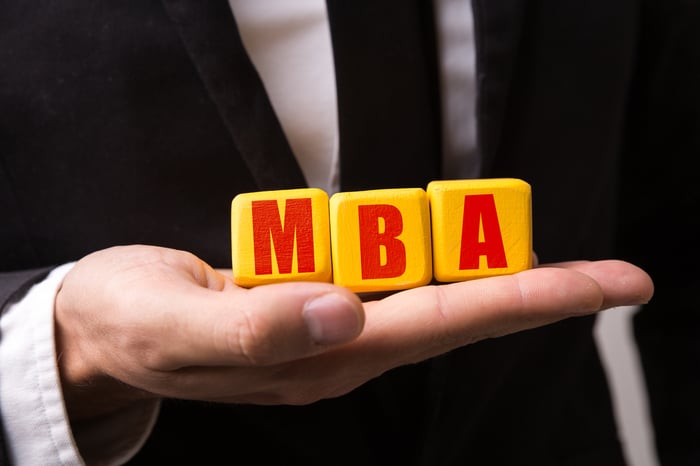 Now the flipside, your MBA might lead to an instant boost in salary, and over time, it might more than pay for itself. But that's not guaranteed, and you might spend a solid decade or more paying back the loans you take out to finance that degree in the first place.

Another thing to keep in mind is the opportunity cost of getting that degree -- namely, foregoing your salary for two solid years to pursue your studies full-time. Say you're currently earning $75,000 a year, which, after taxes, puts roughly $56,000 a year in your pocket. Give up that income for two years, and all told, your MBA will end up costing you $112,000 plus tuition, fees, and any other associated expenses.

Of course, you do have the option of attending school on a part-time basis and getting your MBA that way. If you do, you'll retain your salary during that time, thus not only softening the financial blow, but quite possibly helping you avoid some student debt (since, conceivably, you can use part of your salary to cover tuition costs).

But there's a downside to that, too. Pursuing a part-time degree can be a major strain on your time and energy, and it could wind up impacting your performance at work. Along these lines, if you're unable to excel in your studies because you don't have enough time in your schedule, you may not get as much out of that degree in the end.

What will an MBA actually do for your career?

Part of the benefit of getting an MBA is making industry connections and gaining exposure to more career opportunities. And there's certainly a value in that. But if you don't actually think the educational component will do much for your career, there may be another way to capitalize on the peripheral benefits an MBA offers. You might, for example, work on expanding your network of contacts by attending more industry events. It's a much cheaper prospect than going back to school full-time.

One additional thing to consider when contemplating an MBA is that unfortunately, not all schools are created equal. Whereas the source of your education may not matter as much in another field, in the business world, the top MBA programs tend to carry more weight than lower-tier schools. Some companies, in fact, make a point of hiring MBAs from the top programs only. If you don't get accepted to a top school, or decide you can't afford one, you may want to rethink the value of getting that degree from a less desirable institution -- because in the end, it may not be worth the money.

Are you prepared to go back to school?

One final point to keep in mind is that many candidates who pursue MBAs do so after several years of experience on the job. If you're thinking of getting your advanced degree but have been working for half a decade or longer, you may have difficulty getting back into that student mindset. Furthermore, if you're used to living a comfortable lifestyle thanks to your reasonably decent salary, you may get thrown for a loop if you're suddenly forced to revert to a full-time student existence, complete with more instant noodle dinners than you care to count.

While an MBA could end up being a great move for your career, think about the numerous things you'll be giving up in the process before finalizing your decision. The last thing you want to do is spend all that money on an MBA and come to regret it later on.

Thinking About Getting an MBA? Here's What You Need to Consider @themotleyfool #stocks Next Article
Current