Please ensure Javascript is enabled for purposes of website accessibility
Log In Help Join The Motley Fool
Free Article Join Over 1 Million Premium Members And Get More In-Depth Stock Guidance and Research
By Maurie Backman - Updated May 8, 2017 at 3:09PM

You don't need to bring in the big bucks to end up a millionaire. Here's how to do it on an average salary.

When many of us think of millionaires, we picture high-powered executives cruising around town in chauffeured limousines. But you don't need to earn an extraordinarily high salary to join the ranks of the wealthy. In fact, if you play your cards right, you can become a millionaire on a fairly ordinary salary -- just $56,000 a year, in fact.

Why do I say $56,000? According to the U.S. Census, the median household income in the country was $56,516 in 2015, the last year for which extensive data is available. And while growing a $1 million nest egg on that sort of salary may not sound doable, it's actually far more attainable than you might think. 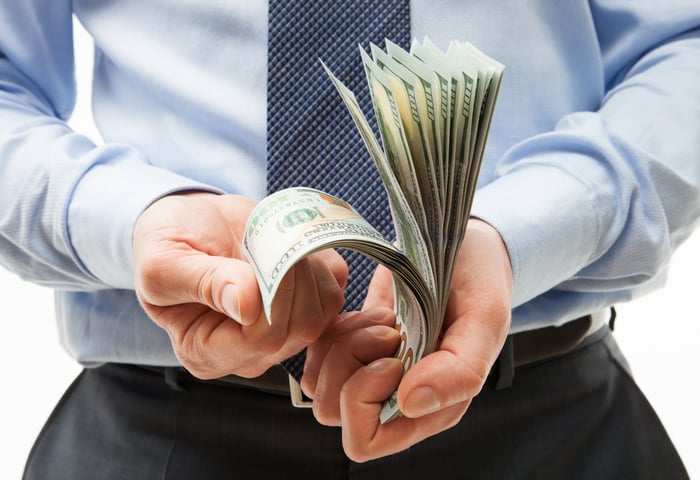 Get your priorities straight

Those people who eventually become millionaires typically don't get there through sheer luck or by making one life-changing investment. Rather, they work hard, live below their means, and start saving early on.

The problem, however, is that more than 40% of workers don't have access to a 401(k), which means that if they want tax-advantaged savings, they're mostly limited to IRAs. Because the current annual IRA contribution limit for workers under 50 is $5,500, many workers aren't inclined to save above that threshold, as that extra money won't get an up-front tax break. But if you earn that median $56,516 salary and contribute $5,500 of it to an IRA each year, you're getting pretty darn close to that ideal 10% savings target.

Now let's assume you start saving $5,500 a year, or roughly $458 a month, early on -- say, at age 27 -- and you continue doing so until age 67, which is what the Social Security Administration considers full retirement age for anyone born in 1960 or later. Let's also assume that you invest that money and take in an average annual 8% return over 40 years. Because IRAs offer tax-deferred growth, you won't pay taxes on your earnings until you reach retirement, which means you get to reinvest your total gains year after year. So if we take that $458 monthly investment and apply it to a 40-year term, we arrive at a grand total of $1.4 million, and it's all possible thanks to the power of compounding.

Compounding is the concept of earning interest on interest. The reason so many financial experts urge people to start saving early on in their careers is that doing so allows them to take the most advantage of compounding. In fact, here's how the age at which you first start saving might impact your total nest egg, assuming a monthly contribution of $458 and an average yearly 8% return:

Table and calculations by author. *Assumes an average annual return of 8%

While starting early can increase your likelihood of attaining millionaire status, the investments you choose play an equally important role. In the above scenario, we turned $220,000 into $1.4 million by applying an average yearly 8% return, which is something you're more likely to get with a stock-heavy portfolio. But if you limit yourself to more conservative investments, you might get just half that return, and that changes your financial picture completely.

The following table illustrates the difference between a more aggressive investment strategy and a safer approach:

As you can see, adopting a more aggressive investment strategy is a key component of growing wealth, and if you start saving early on, you'll have plenty of time to ride out the stock market's ups and downs. On the other hand, if you play it too safe, you'll get much less bang for your investment buck.

You don't need a high-paying job to become a millionaire by the time you retire (or even sooner). All you really need is a smart savings and investment strategy from the get-go, along with a willingness to adopt a lifestyle that supports that strategy. If you make savings a priority early on in your career, you'll be well on your way to reaping what could be a significant financial reward down the line.