Please ensure Javascript is enabled for purposes of website accessibility
Log In Help Join The Motley Fool
Free Article Join Over 1 Million Premium Members And Get More In-Depth Stock Guidance and Research
By Daniel B. Kline - Oct 31, 2017 at 9:04AM

Demand for retail workers has helped the market.

The holiday hiring season has helped drive median base pay for workers in the United States up 1.6% in October to $51,220, according to data from the Glassdoor Local Pay Reports. That's an improvement over 1.4% growth in September, but down from the peak increase of 3.5% that occurred in January.

October's numbers were helped by seasonal demand for retail workers. Warehouse associates, for example, earned 4.3% more and store managers saw their pay go up by 4%.

"U.S. wage growth is steady but slow. We've seen incremental increases over the past few months after a slight decline of U.S. median pay over the summer months," said Glassdoor Chief Economist Andrew Chamberlain in a press release. "While we are still well below the 3.5% pay growth rate of January, I am encouraged by the slight salary increases recorded since August and anticipate growth to continue to accelerate through the end of the year." 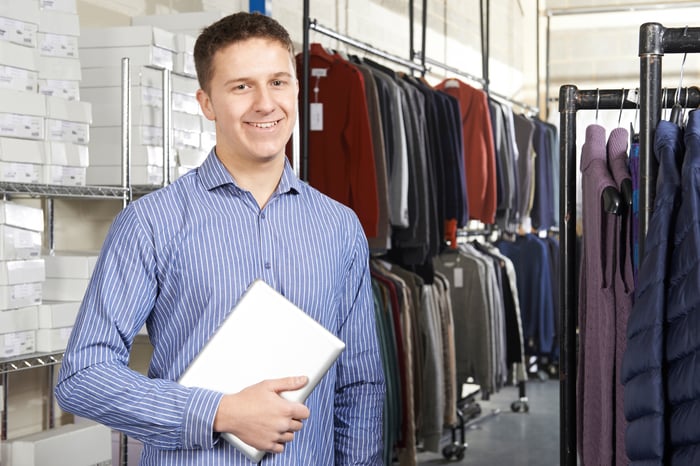 Retail workers have led the way when it comes to wage increases. Image source: Getty Images.

The holiday season has been a good time for American workers. There is both increased demand with many retailers and delivery companies hiring extra workers while some companies, including Wal-Mart (WMT 0.80%) have decided to give existing employees more hours. Demand, coupled with an unemployment rate that has hovered near historic lows, has created leverage for retail workers as well as fields that directly support the retail industry.

At the end of October, there were more than 698,000 open jobs in the retail industry listed on Glassdoor. A number of jobs in those spaces saw significant increases during the month:

"We are seeing increased demand for roles that serve as the logistical foundation for back-end operations for online retail," said Chamberlain. "We anticipate this will continue to grow over the coming months, fueled by the upcoming holiday season and as Amazon and Walmart expand their online retail presence."

What other jobs have rising wages?

Jobs in the healthcare space continue to see rapid wage growth due to demand. Insurance agents saw wages increase 5.3% to $42,729 and licensed practical nurses saw their pay grow by 3.4% to $42,091, according to Glassdoor. Nursing jobs have seen their wages rise as well. Glassdoor has more than 908,000 open jobs in the healthcare industry as of Oct. 31.

Wait until after the holidays?

While these numbers are encouraging, it's hard to know if they will carry over after the holiday hiring season ends. A number of retailers traditionally offer some of their seasonal workers permanent positions. If that happens it should keep unemployment low giving workers increased leverage when it comes to wages.