Please ensure Javascript is enabled for purposes of website accessibility
Log In Help Join The Motley Fool
Free Article Join Over 1 Million Premium Members And Get More In-Depth Stock Guidance and Research
By Daniel B. Kline - Dec 7, 2017 at 10:02PM

Everyone has worked with someone who rubs people the wrong way. People like this may not know that their behaviors annoy everyone else, and in some cases, they actually think their actions are positive.

It's hard to let people like that know that their behavior has hurt their standing in the workplace. What you can do, however, is make sure you're not one of these typical workplace drags. To do that, you need to make an honest self-assessment to see if you engage in the actions associated with any of the categories of people we're going to talk about.

In many cases, this isn't an all-in situation. It's not about whether you exhibit some of these characteristics on an occasional basis. Instead, you need to examine if you're a chronic practitioner of any of these behaviors. If you are, then it may be time to consider making some changes. 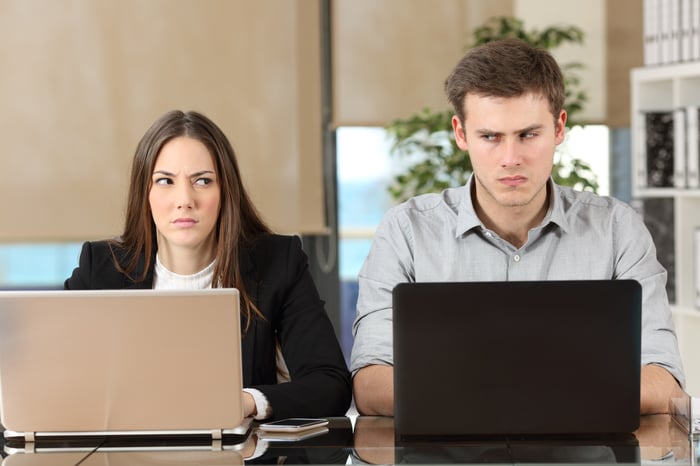 Try to be the best co-worker you can be. Image source: Getty Images.

Sometimes things go wrong at work and it's perfectly justified to complain to your co-workers. That's reasonable, if rare, but when complaining becomes the norm, you bring the entire mood of the office down.

If things are that bad, then it may be time to move on. Feeding negativity doesn't bring about change and can poison an otherwise positive environment.

That doesn't mean you shouldn't try to correct workplace wrongs. If there are legitimate concerns, bring them up through the proper channels. If that doesn't work, then complaining to co-workers certainly won't accomplish anything.

It's natural for people who work together to speculate on the private lives of their co-workers. Keep those thoughts to yourself. Who may or may not be dating in the office is not an acceptable workplace discussion topic.

You should even be careful when it comes to work-related gossip. You may know that someone is getting a promotion or someone else is getting fired, but it's important to make sure news like that gets delivered through the right channels, rather than you, so it doesn't make its way to the people involved before they're properly notified.

3. The guy who disappears

Many years ago, in my first summer as a paid employee of the camp where I had previously attended as a camper, our group was often tasked with physical labor. That might mean doing heavy lifting or engaging in unpleasant tasks like dealing with clogged plumbing.

One of my co-workers had an amazing ability to be otherwise engaged when this type of labor came up. When that happens a few times, it may be an accident. When it starts happening every time, the rest of the staff gets resentful.

In this case, my co-workers made it clear that this person was ducking his responsibilities. They made it a mission to track him down when the absolute worst assignments came up and make sure he got them.

People will resent you if you always find your way out of the hardest work. Make sure you do more than your fair share, so that when you really do have to say no to something extra or unpleasant, it won't cause a problem.

There are lots of names for the person who kisses up to the boss a little too much, and none of them are good. Again, this can be a fine line. You certainly want to support and respect the person in charge, but there's a difference between that and being a fawning lackey.

Obviously, how you treat your boss depends a lot on him or her. Some bosses carry themselves as above the workers, while others take a more "one of the team" type approach. No matter what the person you work for is like, treat them as they ask to be treated, but not as if they can do no wrong or that the sun rises because of them.

Be a good co-worker

You can avoid being any of the people on this list by focusing on being the best co-worker possible. That requires that you sometimes examine your own behavior and consider how it affects others. If you do that regularly, you're likely to be a more-valued member of the workforce.