Please ensure Javascript is enabled for purposes of website accessibility
Log In Help Join The Motley Fool
Free Article Join Over 1 Million Premium Members And Get More In-Depth Stock Guidance and Research
By Maurie Backman - Feb 26, 2018 at 7:38AM

Not keen on becoming the boss? You're not alone.

When we think about the various ways our careers might progress, it's natural to imagine ourselves in a position where we're managing others. But that may not be the most obvious or even desirable career path for most of us. A 2014 Pew study found that 43% of employees don't want to be managers, and that's not the only anti-manager data out there. Only 33% of Americans feel that managing others will advance their careers, according to survey by staffing firm Addison Group, and a 2014 CareerBuilder survey had similar results.

Before you set your sights on reaching manager status, you may want to consider some alternate options for moving your career forward. Though becoming the boss might seem like the ideal path to take, there are several drawbacks to management you should know about. 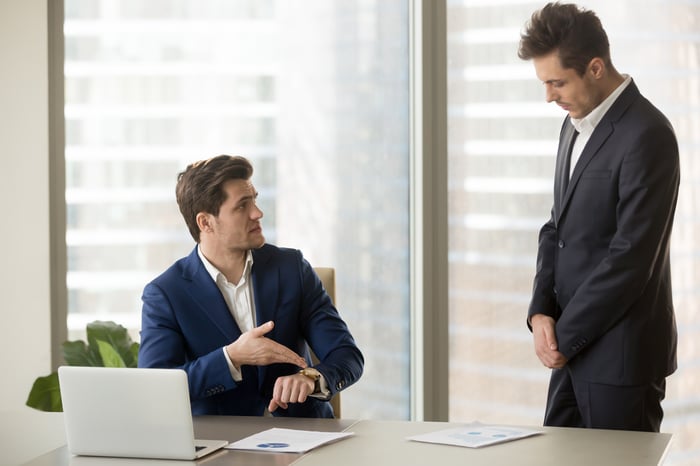 As an individual contributor on your team, you're probably responsible for certain key tasks that impact your company's performance. Now imagine that you're one person on a team of 20. Well, guess what? Your manager is ultimately responsible for your entire team's performance, and that, frankly, is a lot of pressure. When we talk about reasons to avoid becoming a manager, it's hard to overlook the stress associated with all of that added responsibility. If you don't want that burden, then you're better off not attempting to move up in that manner.

Though meetings are frequently a part of office life for workers across all levels, managers are even more likely to spend hours of their valuable work time wasting away in conference rooms. In fact, middle managers spend roughly 35% of their time in meetings, according to career site The Muse, and that percentage climbs to 50% for upper-level managers. If you're not a fan of meetings, then you may want to steer clear of the management path.

It's often the case that managers are called on to do the dirty work that comes with running a business. For example, if a company is forced to downsize, it'll be that company's management team that's responsible for sitting employees down and explaining that they've been let go. Similarly, managers are often tasked with hiring and firing decisions -- decisions that affect not just a given company, but also people's lives. That's a lot of emotional pressure, so to speak, and it's the type you may not be equipped to deal with.

Of course, there are plenty of good reasons to become a manager -- a chance to build teams, attain recognition, and boost your salary. But if being a manager doesn't sound like the sort of thing you want to do, don't feel obliged to pursue that particular path. There are plenty of other ways you can grow your career without having to deal with the accountability and politics that management positions tend to require.

For example, if you're a graphic designer who enjoys the hands-on work, you might aim to get promoted to project leader rather than team manager. This way, you'll get to spend your days doing design work and helping other people perfect their skills -- without having to write their performance reviews or conduct their weekly one-on-one meetings. In fact, there are plenty of individual contributors who never make it past that level yet manage to have successful careers, so if being a manager sounds downright awful, leave that role to someone else.