Please ensure Javascript is enabled for purposes of website accessibility
Log In Help Join The Motley Fool
Free Article Join Over 1 Million Premium Members And Get More In-Depth Stock Guidance and Research
By Daniel B. Kline - Updated Mar 1, 2018 at 8:11AM

It can happen for a good reason, but you can fix it.

When you start at a job for less pay than people in similar positions, correcting the situation can be a challenge.

The pay disparity may have been fair at first. Maybe you went from intern to a job that you had to learn as you did it. In that situation, it's not unfair to pay you less than an experienced person.

The problem comes when you gain the needed experience and are performing as well as people who make a lot more than you. When that happens, some people find themselves trapped by their original low pay rate. You may get raises, but companies rarely take steps to correct a lower-than-market-rate salary. So if you want to get what you deserve, you have to take matters into your own hands. 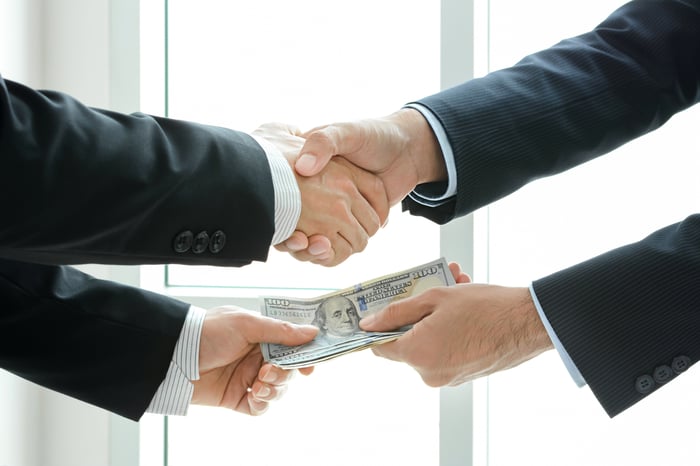 You have to be your own biggest advocate when negotiating salary. Image source: Getty Images.

How it happened to me

My first full-time job came when my boss at the magazine I worked at in college got fired. It happened during winter break, so I had over a month where I could work full time, more or less taking over the position.

At the time, I was excited to land any job, especially while I was still a college student. The job market was lousy, and most of my friends had little hope of finding full-time positions in journalism.

Because of my age, lack of experience, and the fact that I would be juggling the job with school, my bargaining power was limited. I got paid an hourly wage (basically minimum wage) until school ended, then moved to a salary that was less than half what the previous editor had made.

It wasn't a terribly unfair offer, but as I learned the job I went from bargain to woefully underpaid. I was running a trade magazine while being paid less than the assistant editors, and even editorial assistants at other publications. I was also 21 and not well-equipped to state my case to a larger-than-life boss.

That put me in a situation where I made less than I deserved, and even decent raises on a percentage basis did little to correct the disparity. I felt trapped, and ultimately quit to take a job that paid better. I now know that what seemed like an insurmountable problem could have been solved.

How to fix a salary disparity

One of the biggest challenges in correcting a salary disparity is knowing what your co-workers make. Many people keep their salaries secret, and some companies don't even list salary information in job ads.

Make your best effort to find out the market rate for your position. Use online tools like Glassdoor and salary ranges posted in help wanted ads from your employer or similar-sized rivals. Once you have this information, make an appointment to talk to the boss or human resources.

Be respectful. Remember that the reason you get paid less is because the company took a chance on you. Acknowledge that, but then lay out how you have learned the position and now perform it on par (or better) than others in similar positions.

Be reasonable. Don't expect to get an instant huge raise, and recognize that people who have more experience will still most likely make more than you. The goal is to get a fair offer that brings your salary to an appropriate number.

Be prepared to fail

Just because you deserve something does not mean you will get it. Your boss may hear your case and then offer a small raise or nothing at all. If that happens, your best bet may be to move on, because this company doesn't value you fully and likely never will.

In many cases, however, the company will be reasonable. It may offer a series of raises that over time bring your salary in line. Or you may be offered a raise along with a promise to revisit the issue in a set period of time.

Be open to reasonable offers, but don't let yourself get stuck. If your company is fair, then it's OK to work with it to create a plan that's fair for you. If it's not, then you have to be willing to leave to go someplace that will value you by your experience, not how you came on board.