Please ensure Javascript is enabled for purposes of website accessibility
Log In Help Join The Motley Fool
Free Article Join Over 1 Million Premium Members And Get More In-Depth Stock Guidance and Research
By Daniel B. Kline, Jason Hall, and Maurie Backman - Apr 12, 2018 at 7:54AM

It's a different lifestyle that comes with risks and rewards.

A traditional job comes with a lot of things that being a full-time freelancer does not offer. In most cases, you get a steady paycheck, benefits, paid time off, and lots of other little perks.

You also get co-workers, an office, and structure. Full-time freelancing comes with none of those. You're essentially on your own, responsible for generating the income you need to live while also having to provide your own benefits.

It can be a scary proposition, but it's also a rewarding one. Freelancers generally set their own schedules and decide what work they take or don't take. Those perks, and others, can outweigh the risks for many people.

The three Motley Fool writers below all once held full-time, traditional jobs and left them for the full-time freelancing lifestyle. Here's what each one sees as the key benefit of making that choice. 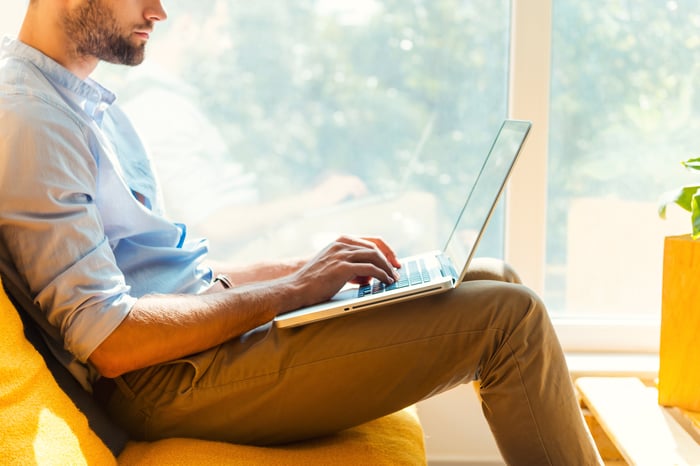 Being a full-time freelancer lets you work from wherever you want. Image source: Getty Images.

Jason Hall: Before I started writing for The Motley Fool, I had a great sales job that paid very well. But it wasn't very fulfilling, and I was lucky enough to have discovered some skill as a writer and investor and was given the opportunity to write on a freelance basis for the Fool.

I'll make no bones about it: I took a pretty big leap of faith -- and some risk as well -- that I would be able to consistently have enough relevant and worthwhile ideas to write about, and that my editors would accept all of my ideas for articles to boot.

But the risk, for me, was well worth the potential reward. My work today is far more fulfilling than my old sales job, and I have a sense of purpose I would get from few other jobs I'm qualified for. And it gets even better for me: My efforts to be a great partner for my bosses at The Motley Fool have opened the doors for more opportunities, including editing and mentoring new writers.

Not everyone gets the chance to walk away from their "day job" and pursue something more purposeful and fulfilling. It's not a stretch to say that taking that leap of faith changed my life in multiple -- and good -- ways.

Maurie Backman: I happen to be extremely fortunate in that the work I love doing lends itself to freelancing. But there was another motivator at play for me in making the decision to freelance full-time, and it's the flexibility this sort of arrangement allows for.

As a parent responsible for managing not only my workload, but also children and a household, working on my own schedule affords me a much saner existence than my previous office routine did. Nowadays, I can work from whatever location I choose, which means that if I have a child home with an ailment, it's not necessarily a shot day for me. Just as importantly, I have the ability to be there for things like teacher conferences without having to worry about taking time off from work.

Of course, there's a trade-off, and it's that I'm often stuck working till all hours of the night when my regular daytime schedule is interrupted by a doctor's appointment or school assembly. But still, I'm grateful to have the option to work at midnight, or 2 a.m., or whenever it is I find the time during a given week, and that's a big part of the reason I chose to be a freelancer.

I stopped wanting to go to work

Daniel B. Kline: Before joining The Motley Fool as a contract writer, I held a succession of dream jobs. In the three years before I made the leap to a full-time freelance lifestyle, I had worked on a cool start-up at a major tech company, worked for my hometown newspaper, The Boston Globe, and ran a small group of local newspapers.

Those were all good jobs, but they came with punishing schedules. At the tech company, my day began at 6 a.m., and I rarely left my desk before 4 p.m., often returning for meetings given that I was the sole east-coast person on a west-coast team. The Boston Globe job was more manageable on an hourly basis, but I had a two-hour commute four days a week.

My last job before making the move to freelance was perhaps the most demanding. Small-town dailies are mostly understaffed, and mine was no exception. I worked from 9 a.m., assuming breaking news did not wake me up earlier, and while I went home around 6 p.m., I remained on call until our deadline, around midnight.

I loved the work, but all three jobs crowded out any other interests, family, and normal relationships. When I made the change, it was a risk. I was not yet a contract writer at The Motley Fool and had received no promises that I would become one.

It worked out. Now, I still work a lot of hours, and I often do at least some work seven days a week, but not having to be anywhere on a set schedule is freeing. Over the past five years, I have taken up yoga, moved to West Palm Beach, begun walking 10,000 steps a day, and have spent a stunning amount of time at Florida's theme parks.

The work I get to do is fulfilling. I get to write, work with other writers, and help The Motley Fool grow its partnerships. Sometimes, I get to be involved in new projects, and every day, I get to work with amazingly talented people.

I don't really work less, but I'm home most days when my son comes home from school, and I generally have dinner on the table when my wife arrives an hour or so later. Yes, I sometimes miss being in an office and having in-person co-workers, but what I gave up is only a fraction of what I have gained.