With over 1.5 million employees in the United States, Walmart (NYSE:WMT) often finds itself in the center of the battle over what employees should be paid. Along with other large employers of entry-level workers, the company has faced protests and calls for it to pay a minimum of $15 an hour.

The retailer has not followed its retail rival Target into pledging to do that by 2020, but it has raised wages three times since 2015. In addition, Walmart points out on its website that its entry-level jobs often lead to bigger things. The company noted that 75% of its managers across all levels -- making between $50,000 and $170,000 a year -- started as hourly workers. 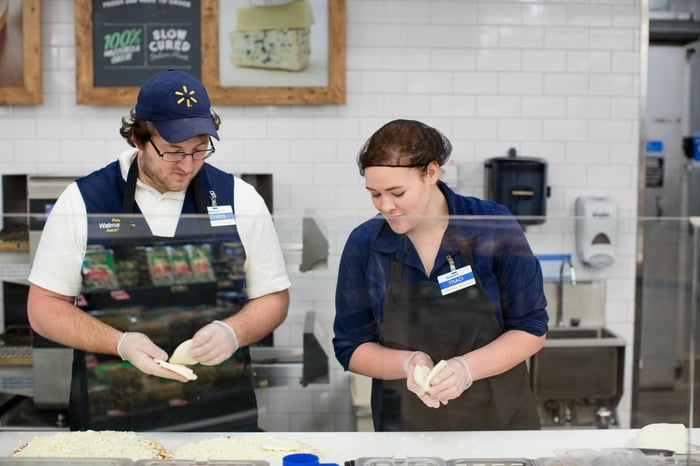 Walmart critics point to the lowest-paid workers in the chain and say that they do not earn a living wage. The company itself tries to focus attention on the fact that it offers a path to higher wages, and that it has raised its pay rates steadily over the last three years.

Of course, you could argue that Walmart's hourly pay increases come at a time when unemployment has hovered around historic lows. The wages hike were likely necessary in some markets simply to find reasonable candidates for open jobs. Still, Walmart's entry level pay rate of $11 an hour greatly exceeds the federal minimum wage of $7.25 an hour.

In fact, it actually exceeds the minimum wage in all but three states, according to Reuters. Walmart also notes that its average wage for full-time hourly workers comes in at $13.79 an hour, well above the $11 starting wage.

It's also worth noting that Walmart does pay higher entry-level rates in some markets. In some cases that's because $11 is below the lowest legal hourly wage, and in others it's to be able to compete for the type of worker the company wants to hire.

Walmart, like any public company, has to serve its shareholders. That means it needs to pay enough to hire the workforce it needs at the most advantageous rate. That's a moving equation that depends on market conditions.

Currently, a shortage of workers and a strong economy are pushing entry-level wages higher. Walmart has to pay more than it once did in order to maintain its in-store experience, but that pendulum could swing back the other way in the coming years as some jobs get automated. The retail giant may also push wages higher as other companies in its space do the same, or public pressure makes it the right thing to do for image-related relations reasons.