Please ensure Javascript is enabled for purposes of website accessibility
Log In Help Join The Motley Fool
Free Article Join Over 1 Million Premium Members And Get More In-Depth Stock Guidance and Research
By Keith Speights – Updated May 31, 2018 at 11:49AM

Can small businesses survive in the age of Amazon? Many of them are thriving.

President Trump tweeted last year: "Amazon is doing great damage to tax-paying retailers. Towns, cities, and states throughout the U.S. are being hurt-many jobs being lost!" Amazon, though, sees its relationship with small businesses in a much different light. The company recently released its first Small Business Impact Report, which says that more than a million small- and medium-sized businesses in the U.S. sell their products on Amazon.

Instead of being crushed by the huge online retailer, these businesses are using Amazon to their advantage. Here's how: 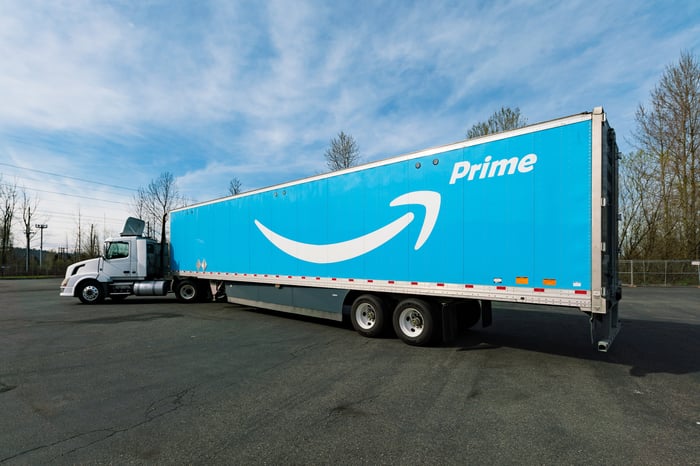 Think about some of the challenges that small retailers face. One biggie is gaining exposure to a large number of customers. In the brick-and-mortar world, this comes down to location, location, location. It's not much different in the online world. A relatively small number of websites command a disproportionate share of online traffic.

Successful online selling also requires a strong distribution capability. If customers don't receive their products quickly -- or pay too much to have the products shipped to them -- it hurts small businesses.

And there's the age-old issue for small businesses: the need for capital. A survey of current and aspiring business owners conducted by Guidant Financial and LendingClub found that the No. 1 problem facing small businesses is the lack of cash flow.

Enter Amazon. The company helps small businesses address each of these challenges. Just as a lever enables people to lift much more weight than they could on their own, Amazon gives small businesses resources that they otherwise wouldn't have.

Amazon's website ranks No. 3 in traffic, with more than 250 million monthly visitors. Selling products through Amazon Marketplace provides small businesses an opportunity to get their products into the biggest retail market on the planet.

Amazon launched its lending program for businesses in 2011. Last year, the company lent more than $1 billion to small- and medium-sized businesses based in the U.S.

Just how big an impact does the symbiotic relationship between Amazon and small businesses make? You might be surprised.

Amazon's Small Business Impact Report states that more than 900,000 jobs have been created worldwide through Amazon Marketplace. While the company didn't provide details on exactly where those jobs are being created, it did say which states have the most small- and medium-sized businesses selling on Amazon. California topped the list, with more than 175,000, followed by New York and Florida, with more than 81,000 and 75,000, respectively.

Roughly half the items purchased on Amazon are bought from small- and medium-sized businesses. The company stated that the top categories of products sold by these businesses include health and personal care, home, electronics, beauty, apparel, sports, and toys.

Amazon is definitely profiting from the services it provides to these smaller businesses. The company reported tremendous results in the first quarter of 2018, boosted considerably by third-party seller commission and fulfillment fees of $9.3 billion -- a 44% year-over-year increase.

And most of the smaller businesses partnering with Amazon think the relationship helps them. A recent survey found that over two-thirds (68%) of small business owners who sell online say that Amazon has positively impacted their sales.

Two sides of the coin

Of course, it's not all sunshine and roses. Many small businesses selling on Amazon find it very competitive. Some don't like the significant slice of profit that Amazon takes from their sales. Others could think that Amazon's push for participation in sales promotions is heavy-handed.

The reality is that Amazon has had a positive and a negative impact on small businesses. Some have been crushed by the giant. Others have adapted and learned to succeed by leveraging the resources Amazon provides. Years after its founding, Amazon still represents a significant change for small businesses. And with change, there are always losers -- but there are also winners.

John Mackey, CEO of Whole Foods Market, an Amazon subsidiary, is a member of The Motley Fool's board of directors. Keith Speights has no position in any of the stocks mentioned. The Motley Fool owns shares of and recommends Amazon. The Motley Fool has a disclosure policy.