We all have our share of annoying colleagues who make coming into the office just a bit less pleasant. But what if you're on a team that's overrun by lazy employees for whom procrastination is a way of life? If that's the case, and you're the one with the solid work ethic, you might consistently find yourself in a position where you're forced to compensate for your colleagues' shortcomings. And that's hardly fair. But rather than resign yourself to that sort of setup, there are things you can do to ensure that work gets tackled more equitably going forward.

Is it laziness or a lack of knowledge?

In order to effectively deal with lazy coworkers, you'll need to determine if their behavior stems from a lack of motivation or a lack of knowledge. If it's the latter, offering to train them and show them the ropes is a good way to not only get more help, but avoid accusing them of behavior that can only be construed as unflattering. 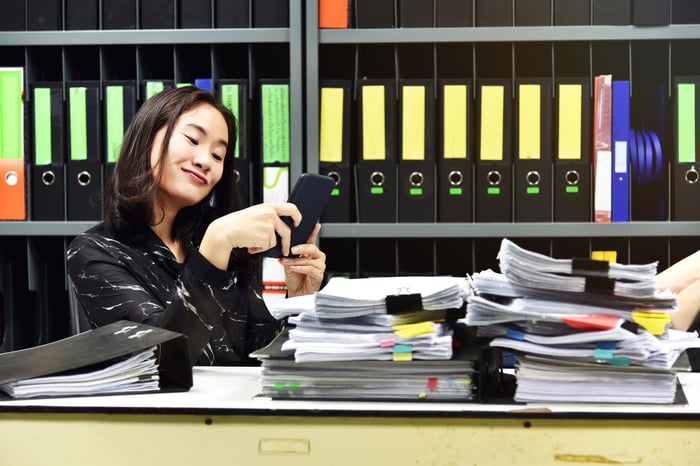 So, sit down with your colleagues and ask if they're facing challenges you can assist with. Maybe a few are struggling to learn a new software that's essential to getting certain tasks done. Maybe others have trouble analyzing data and, as such, tend to fall behind on their reporting responsibilities. Either way, be sure to get to the bottom of their actions (or rather, inaction) so you'll know how to effectively proceed.

Broaching the topic with your manager

If you come to realize that it is indeed pure, unadulterated laziness that's causing your coworkers to slack, your first move should be to explain to them that their habits are hurting you. If they're the courteous type, they may come to realize that they're being unfair and change their ways. If not, then you'll probably have no choice but to involve your manager. And that's a conversation you'll want to approach delicately.

When you sit down with your boss, don't make the mistake of calling your colleagues lazy outright. Doing so might make you seem petty or unprofessional. Rather, simply paint an accurate picture -- that for whatever reason, it seems like lately, you're doing more than your fair share of the load, and that you'd like your boss to step in and address it. If you present your manager with data -- such as the fact that you've worked late every night for the past two weeks while your colleagues have left early or on time -- your boss is more likely to not only take the matter seriously, but recognize the need to intervene.

Along these lines, you'll need to be prepared to show your boss how your coworkers' collective behavior is impacting your workday. Maybe you're constantly juggling because your plate is overloaded, thereby putting yourself in a position to potentially make mistakes or rush through important tasks. Or maybe you're frequently showing up to meetings unprepared because the people on your team responsible for certain reports aren't getting them done on time. No matter the details, it pays to be as specific as possible so your boss is in the best position to mediate.

Dealing with lazy colleagues is never fun, especially if it puts an unfair burden on you. So don't let things continue that way. Call out your coworkers (professionally, of course), and if that fails, take the issue to your boss. Otherwise, you'll risk burning yourself out in an effort to compensate for other people's needless shortcomings.