Some jobs pay well at least partly because it's hard to find people willing to do them. In other cases, jobs come with six-figure salaries because they require a level of education that only a relative few of us ever obtain. In those areas, a job seeker can feel comfortable in knowing that they are sought after.

Some careers, feature an entirely different dynamic: six-figure salaries matched with intense competition for every open position. Glassdoor's Economic Research Analyst Amanda Stansell defines job competition as high when "there are at least two job seekers for every job, per job title," according to a press release from the company.

In some cases -- particularly in the technology space -- such positions may have as many as nine or 10 people applying for every opening. That, Stansell explained, is due both to the high pay and the fact that tech companies are known for offering excellent perks and benefits.

"Many young, skilled workers are flooding into these roles," she said. 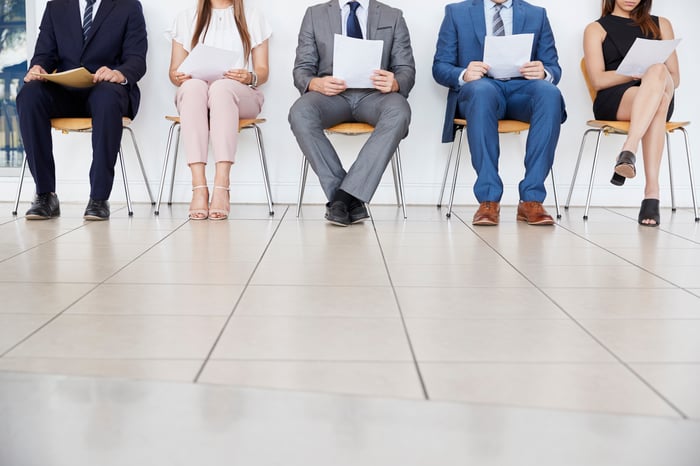 Some jobs have more applicants than others. Image source: Getty Images.

These are the six-figure jobs with the most competition

What can you do to stand out?

In a crowded field with lots of excellent applicants, you need to find a way to be noticed. One clear way to start is to not be a stranger to the people doing the hiring. That requires networking, and at certain levels, perhaps taking an internship before a job is even available.

Even if you don't meet the specific person doing the hiring for the jobs that interest you, you may know someone at their company, or even someone who knows them personally. Don't be shy about working every angle, because even a small connection can be enough to get someone to bring you in for an interview.

Beyond networking, use every tool available to you. Make sure your cover letter addresses the specific job you're seeking, and highlight what makes you are a better fit than the many others with similar credentials who will be applying. You'll also want to fine-tune your resume to accentuate what you'd bring to the role, and how your experience and skills connect to the position being offered.

Be persistent, fast and diligent. Sometimes a hiring manager will only interview the first few qualified people who apply. If you wait, you may lose out.