An extended period of unemployment levels hovering around historic lows has led to a strong market for workers seeking a job. In many industries, it has become harder for employers to fill open positions. In theory, that should mean if you are looking for work, interviews will be easy to come by.

That, of course, is not always the case. Just because the job market is strong and good candidates are scarce, that does not mean your resume will get picked for an interview.

If that's what's happening, you're probably making some pretty big mistakes. Fix those and your chances of landing an interview will go up. 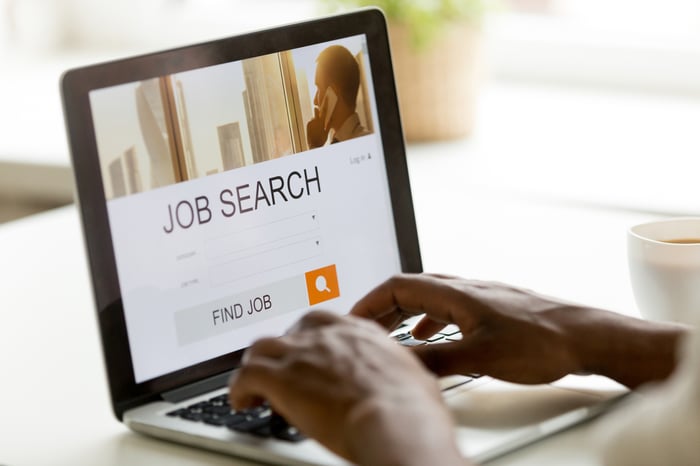 Make sure you don't get lazy with your job search just because the market is worker friendly. Image source: Getty Images.

Are you customizing your cover letter?

Just because the job market is strong does not mean there's no competition for open positions. It's not enough to simply send your resume and a generic cover letter (or none at all). You need to customize your cover letter so it addresses the specific position being applied for.

Make sure you answer questions from the job posting that your resume does not address. Explain why you're qualified for the position or how you will excel in it even if you lack something asked for in the ad.

When I was a newspaper editor who handled hiring for editors and reporters, I generally scheduled interviews with the first two or three qualified candidates who applied. Every qualified person who applied after that went into a pile to be called only if the initial three interviews went poorly.

Respond to ads quickly. Spend time every day looking for openings and apply when you see appropriate openings.

It's possible to get a reach job, but if that's mostly what you are applying for, then it makes sense that you're not landing a lot of interviews. A tight labor market is a time when some companies may be willing to be flexible on standards or look for out-of-the-box candidates, but many won't do that.

If you're reaching, be as clever as you can. Make it clear in your cover letter that while you're not a traditional candidate, you can handle the job.

Do you have a red flag?

Go through your most-recent set of resumes and cover letters used to apply for jobs and read them carefully. If you don't see an obvious mistake, ask someone else -- ideally someone in the field -- to see if there's a red flag you are missing.

Sometimes we become blind to our own mistakes. Maybe there's a prominent spelling error or your email address is actually innocent, but it could be seen as vulgar. You may not have a red flag, but it's best to check carefully to make sure.

Sometimes it's not you. Even in a good job market for workers, things can vary based on field and geography. In addition, some positions are advertised that don't actually exist, or they get filled internally.

Make sure you're always putting your best foot forward by following the steps above, but don't become discouraged if it doesn't work. Stick with it, continue to do things like building your network, and keep applying for jobs. Eventually, in most cases, you'll break through and land the interview that leads to your new job.