Shark Tank takes the usually secretive venture-capital process and brings it to television. On the show, the panel of "sharks" -- wealthy entrepreneurs -- hear pitches from business owners who are requesting the sharks invest their own money in their companies, which range from barely start-ups to successful operations looking to dramatically expand.

Each of the regular panelists, Kevin "Mr. Wonderful" O'Leary, Barbara Corcoran, Daymond John, Robert Herjavec, Lori Grenier, and Mark Cuban bring different skills to the table. A company might want to work with Cuban for his digital experience, Grenier because of her proven ability to sell at retail, or John because of his experience in fashion and licensing.

On each episode, entrepreneurs stand in front of the sharks and pitch their companies. Some get deals, many don't, but nearly all get lessons that apply to not just the business owners on the show, but to many small-business owners. 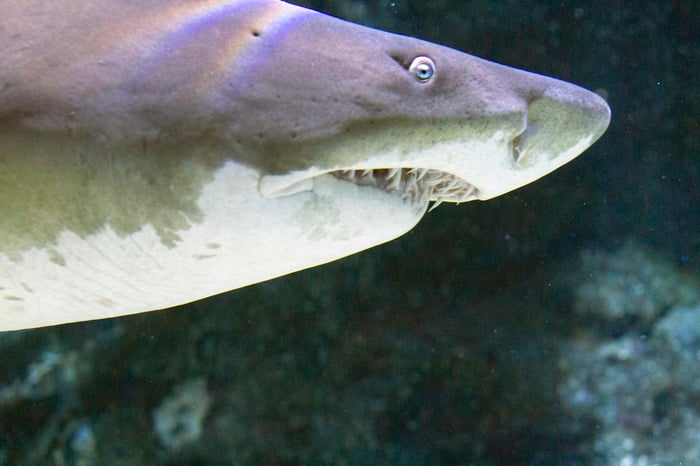 Sharks invest their own money in companies that they make deals with. Image source: Getty Images.

Occasionally, one of the sharks invests in a company that's just an idea. Maybe the business owner has a patent or a product that could fill a demonstrable niche. In most cases, though, one of the panelists -- usually O'Leary -- asks about sales.

If a company has sales that are both strong and growing, it can increase interest from the sharks. When a company has either limited sales (or none) or a pattern that's moving in the wrong direction, it's a red flag for the sharks.

It's easy as a small-business owner -- especially in a start-up -- to worry about things that aren't sales. In reality, even if you've raised money, your long-term survival depends on growing your sales.

Just appearing on Shark Tank can send a slew of new customers to a company. Making a deal with one shark or more ensures that the publicity train will keep rolling well after the show has ended.

Because of that, the sharks often ask for more equity at better valuations than previous investors in the companies being presented. They argue that they're worth it because of the notoriety they bring, and generally, they're right.

Your rich uncle who invested in your restaurant probably can't pick up the phone and get high-profile NBA players to eat there, then rave about it on social media. Cuban can, and every shark can deliver attention in various ways.

You may not be able to partner with a celebrity, but there are lots of ways to get positive attention for your small business. Being good is often not enough. You need to build buzz and get the word out.

Because the sharks know their worth and how valuable they are to entrepreneurs, they sometimes offer deals that aren't favorable to the companies. It can be tempting for a business owner to take the deal because partnering with a shark can be a path to riches.

In many cases, however, when entrepreneurs walk away from bad deals, the other sharks applaud them. Sometimes, it's important to believe in your own worth -- something that's easier when a company already has had success -- and not give up too much just to make things easier.

All of the Shark Tank panelists are self-made. They worked their way up from modest backgrounds and clearly value entrepreneurs willing to do whatever it takes to get the job done. You may not ever be on Shark Tank, but any small-business owner can benefit from working as hard as possible while growing a business from nothing to something life changing.