Most people don't get a chance to play professional sports for a living, but many truths we see on the field apply to the average workplace. Just because you're not working in front of sold-out World Series crowds does not mean that some of the things athletes have to deal with aren't similar to situations you may find yourself in.

The 2018 Boston Red Sox offer a number of lessons that someone working a more traditional job can learn from. You may not be competing for (and winning) a world championship, but you can act like a champion and propel your own career forward. 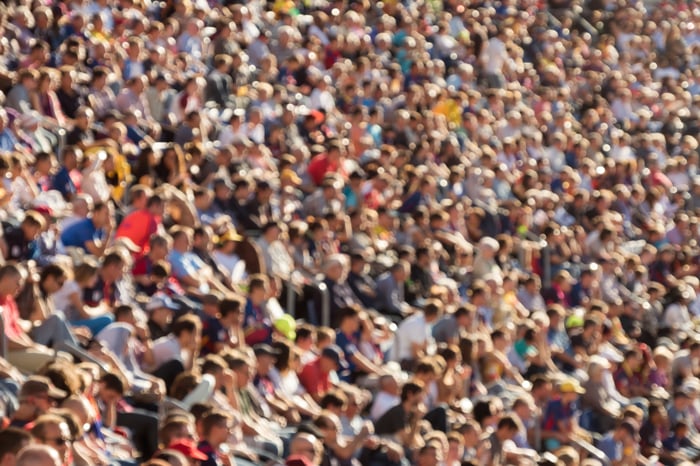 You don't need a crowd of spectators to be inspired at work. Image source: Getty Images.

1. Make the most of your opportunities

Steve Pearce has been what's politely called a "journeyman." That means he has bounced around the league, playing for multiple teams and never making much of a mark. He was good enough to stay in the Major Leagues, but for reasons that are hard to pinpoint, he never became an essential member of any of the organizations he played for.

That changed with this World Series. Pearce, who was traded from Toronto to Boston in June, changed the course of his career and baseball history with one home run and a bases-clearing double in game four of the series and two home runs in the series clincher.

Those hits earned Pearce the World Series Most Valuable Player Award and forever cemented his place in Red Sox lore. His actions showed that just because success and recognition do not come easily does not mean they won't come. Pearce kept at it -- long after many players might have called it a career -- and when the opportunity came, he seized it.

Entering the 2018 playoffs, David Price had lost the first 10 postseason starts of his career. That put a cloud over the pitcher who had been a regular-season force, and it's the kind of demon that sometimes becomes a self-fulfilling prophecy.

Price did not allow his past failures to define his future. He pitched well in the early rounds but struggled to earn a win. He got his first postseason victory in the American League Championship Series and earned two wins in the World Series, including the series-clinching victory.

This changes how people will perceive Price going forward. He changed his narrative, and that's something you can do as well if you keep getting up after being knocked down.

3. Do whatever is asked

Baseball generally has well-defined roles for its players. Starting pitchers start games and relievers finish them. In the playoffs, however, that's not always the case. With so much on the line, Red Sox manager Alex Cora asked members of his team to operate outside their comfort zones.

Position players played in unfamiliar spots due to the rule that pitchers have to bat in National League ballparks. Others who'd earned the right to start sat on the bench, ready for the moment they were needed. And, most notably, starting pitchers came on in relief, shoring up a weak bullpen, perhaps the team's only weakness.

Cora kept the Red Sox on an even keel throughout the season by having a relentlessly positive attitude. He created a supportive culture in which players were defined by their actions, not their pasts. That allowed Price to find playoff success and created the environment where Pearce could be a hero. You can accomplish the same things if you remain positive and keep working toward your goals even when dealt a setback.