Please ensure Javascript is enabled for purposes of website accessibility
Log In Help Join The Motley Fool
Free Article Join Over 1 Million Premium Members And Get More In-Depth Stock Guidance and Research
By Daniel B. Kline – Updated Nov 13, 2018 at 3:06PM

It's not right for everyone, but it can be a great option for the self-employed.

I'm a full-time work-from-home freelance writer, but I don't actually like to work from home. I've rented an office, but I found it a bit bleak to be alone in a windowless small room, and I've worked out of the many coffee shops available in downtown West Palm Beach.

Over the past two years, I have also spent some time working out of three different coworking spaces. Two were local businesses that I eventually stopped using due to their distances from my house. My current space is a fledgling national chain that's about a half mile walk from my house (and in the same plaza as the Starbucks where I'd most often been setting up shop).

I've generally enjoyed the experience, but coworking has pluses and minuses. It's certainly not for everyone. 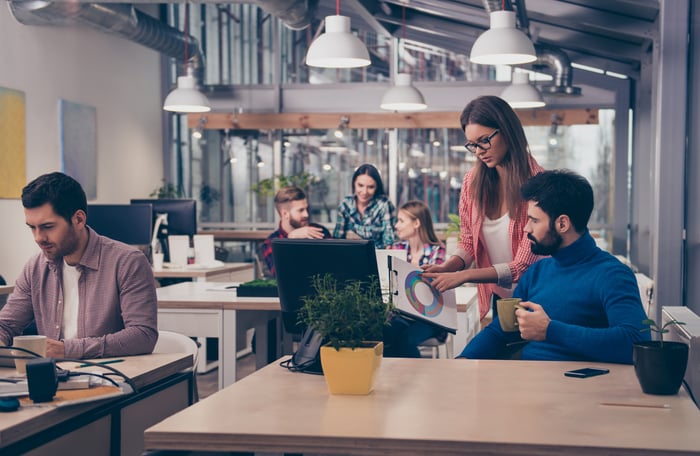 How does coworking work?

All three spaces I've used had four tiers of membership. The first was a "community" membership that allows limited access to the space (usually one day a month) and access to events held in the space. After that comes shared work or floating desk space -- that basically means you can use any of the common areas, but don't have any personal/private space. That's followed by dedicated desks (which come with locking cabinets so you can leave stuff) and private offices.

There's also shared conference rooms, copy machines, a coffee/snacks area, and sometimes other little perks (maybe beer on Friday). The clientele can vary a bit too: The first two I used were in funkier neighborhoods, charged less than my current spot, and thereby attracted an eclectic artsy/start-up clientele, whereas my new shared space has a more corporate feel.

What are the pluses?

For me, there are two major advantages. The first is that I get to speak out loud. I can't say I've made any friends (the space I'm in just opened and only a few people are using it most days), but at least I get to have some minor conversations, which is something I miss working alone.

The second is that I get to sit in a proper office chair. That may seem like a minor deal, but coffee places generally have furniture that's not meant to be sat on for multiple hours. My coworking space has a lot of seating choices, including comfortable chairs.

What are the minuses?

If you work in a shared space, you're going to hear other people. Sometimes that's just a lot of people typing, but it can also mean loud conversations, or the occasional obnoxious person who should be using a private phone booth (many spaces have them) but chooses to talk in public so everyone knows how important they are.

Coworking is also generally somewhat costly for the average self-employed person who can't pass the expense off to an employer. There's a lot of variance in what you will pay. I'm currently spending $375 a month for 24/7 access to the shared workspace. That's on the high end for my market, but the space I'm in is well located, while the cheaper ones are in more industrial areas.

Is coworking right for you?

You have to consider what you want out of the relationship. For some people, coworking offers networking opportunities and ways to get more work. That's not a concern for me as I don't need more work, but I would be happy to meet someone and do a little editing or writing as a favor.

I'm not really interested in the business seminars and mixers most coworking spaces (including mine) put on. Instead, I'd like to make some casual friends, people I can have coffee breaks with or talk about the game or last night's big television show.

It's important to figure out what your priorities are. It may just be important to get off your couch or out of the house. That alone might make you more productive -- or you may learn that being around other people isn't as valuable as you thought it would be.