Please ensure Javascript is enabled for purposes of website accessibility
Log In Help Join The Motley Fool
Free Article Join Over 1 Million Premium Members And Get More In-Depth Stock Guidance and Research
By Daniel B. Kline - Dec 8, 2018 at 7:25AM

Both choices have downsides.

December isn't just the holiday season for business owners. It's the end of the year and a time to evaluate plans for the year ahead. Doing that can lead to some difficult decisions, and sometimes a reduction in workforce may be needed.

In some cases, a worker is on the chopping block because of his or her performance. At other times, it could be a layoff due to slow sales or changing needs for the company.

Unless a worker marked for termination has done something terrible -- like stealing, punching a customer, or telling you his or her real feelings at a holiday party -- letting someone go isn't easy. It becomes harder during the holiday season, when managers and owners are faced with the decision to let the person know right away, or wait until after New Year's Day. 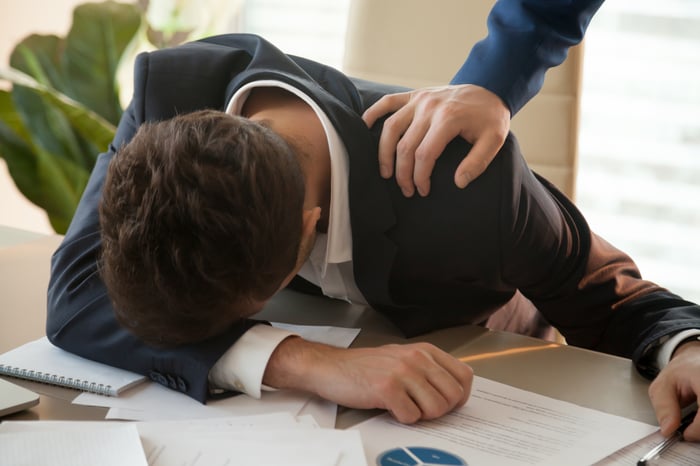 This is a challenging time of year to let someone go. Image source: Getty Images.

You should first consider the needs of the business. If it's a layoff where you would rehire the person in the right situation, then you may want him or her to stick around during the holiday season. In that case, it's best to wait until the new year.

If you're letting a person go for performance reasons, it may not make sense to drag things out. Unless you believe a strong holiday performance might change your mind, it's best to make the move right away.

Many cases, of course, fall somewhere in the middle. The move is being called a layoff, but even if business were better, you may not want the person to stick around. In that case, you're faced with a tougher decision, and neither answer is wrong as long as you handle the layoff correctly.

What the right way to let someone go before Christmas?

You want to act with compassion and consider what's best for the employee as well as the company. If you decide to let someone go before the end of the year, you should -- if you can afford it -- give them added severance that covers the remaining days in the year. That's only fair since it's hard to land anything other than a seasonal job once the calendar moves past the first week of December.

If you elect to wait until the new year, it's important that your intentions stay hidden. It's not fair for your employee or employees to spend the holiday season worrying about their job security. When people know layoffs may be coming, it's generally best to make them happen and end the speculation.

If you choose to terminate the person, explain how you decided it would be better for them to have a jump on the new hiring season in January. And, letting someone go before the holidays may affect their spending, which could help if the person is out of work for a long period of time.

Be direct and caring

Whether you let someone go before or after the holidays, make it very clear by your words what you are doing. Don't leave room for interpretation, but do be as compassionate as you can be.

Remember, this is someone losing a job either during the holiday season or just after it. That can be a jarring situation -- worse than getting let go another time of year -- so you want to make this difficult situation as easy as possible on your now-former employee.