Many companies these days expect a lot from their employees. Workers are often required to respond to emails after hours, log on during weekends, and meet deadlines even when they're presented at the very last minute. It's this pressure to constantly be on that has perhaps contributed to a very disturbing statistic: Workers took only 2.5 sick days, on average, over the past year.

Now before you chalk that figure up to improved health habits, remember that the winter of 2018 featured one of the worst flu bouts we've seen in years, and that even folks with reasonably robust immune systems are susceptible to nasty germs. So why such little sick time? 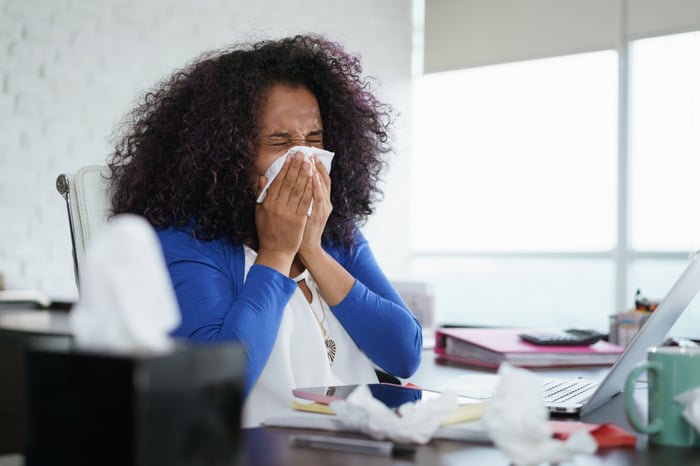 According to data from LinkedIn, the reason boils down to workers saying they can't afford the time off. In fact, millennials aged 18 to 34 are three times as unlikely as their older counterparts to take sick time due to financial concerns. And given the number of companies out there that are rather stingy on the paid-time-off front, it's not surprising that most workers would rather push themselves to go to work sick than risk taking an unpaid day or forgo time off for leisure purposes. Throw in the fact that calling out sick often means falling behind on job-related obligations, and it's no wonder so many folks are willing to force themselves to work when they desperately need to be lying in bed.

If you've been upholding the practice of coming to work sick, it's time to change your outlook and start being kinder to your body. Otherwise, you might end up not only hurting your health but damaging your career simultaneously.

You might think it's noble to drag yourself to work sick if you have an important meeting or deadline. In reality, you're only doing your colleagues a disservice by exposing them to whatever germs you're plagued with. In fact, 57% of workers say that their peers should take sick time as needed rather than come to work when they're under the weather. And it makes sense -- most folks would prefer to pick up your slack for a day or two than risk coming down with something that leaves them sidelined for days.

Another thing? When you force yourself to work while sick, you risk making mistakes. Big ones. And that, in turn, could make you look bad in front of your boss and peers.

Of course, not everyone who comes to work sick does so out of loyalty. If you're among those folks with limited paid time off, calling out sick could mean losing a day of pay -- something you probably can't afford. Furthermore, if your company bundles sick days and vacation days into a single paid time off benefit, you might hesitate to use, say, five out of 10 days to deal with illnesses when you're planning a getaway.

These are understandable reasons for coming to work sick, but that doesn't make that practice right. The next time you're ill, get your boss on the phone and explain your dilemma. State that you don't want to come in and infect others, but you also can't afford to use up a day within your limited allotment. Then offer to make up the time when you're feeling better by coming in over a weekend, which your boss, if he or she is reasonable, might very well agree to.

Similarly, if you're feeling too sick to go into the office but well enough to work a partial day (or even a full day) from home in between naps, ask your manager for that leeway. This way, important tasks still get done, but your phlegm stays contained.

One final thing: The more you push yourself to go to work sick, the longer it's likely to take you to recover from whatever ailments you may have. In many cases, taking a single day off will prevent you from having to take multiple days down the line when your condition worsens. Besides, staying home when you're sick is the courteous thing to do, and sometimes, it's worth falling behind on work or taking a hit on paid time off to spare your colleagues the misery you're going through.