Please ensure Javascript is enabled for purposes of website accessibility
Log In Help Join The Motley Fool
Free Article Join Over 1 Million Premium Members And Get More In-Depth Stock Guidance and Research
By Daniel B. Kline – Updated May 3, 2019 at 2:33PM

It wasn't all that many years ago when leaving work generally meant leaving work behind. A few professions did require taking your job home with you (hats off to teachers everywhere) or demand you to periodically be on call (doctors), but otherwise, quitting time was quitting time. Your boss might be able to call you on your landline after hours, but there was no guarantee you would answer.

Now, the ubiquity of smartphones has created an expectation that workers will pretty much always be available. That's not a huge problem if you're sitting on your couch when your boss calls with a simple question. It can be a bigger issue if you're behind the wheel -- because many workers will be tempted to answer a text from the office no matter where they are or what they are doing.

And according to a new study from auto insurance comparison site The Zebra, one demographic in particular has a bigger problem with this than most. 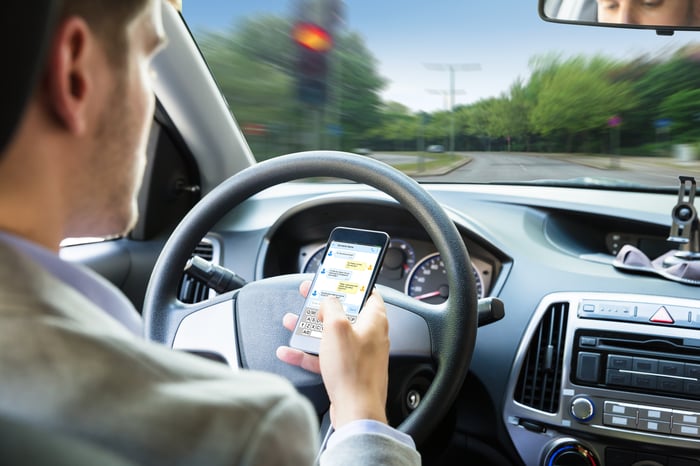 Distracted driving can get you or someone else killed. Image source: Getty Images.

Younger workers -- those who grew up with smartphones and constant texting -- said they feel a higher degree of compulsion when it comes to answering work-related messages while driving. Among survey respondents aged 18 to 34, 37% said they felt that pressure, compared to an average of 25% across all age groups.

Checking your messages while driving may seem like a small risk, but there are real consequences. Distracted driving, which includes texting while driving, causes the death of nine people a day or roughly 3,500 per year. That's below the 29 people a day killed by drunk drivers, but it's still a major, avoidable loss of life.

In addition, distracted driving has a negative economic impact to the tune of $40 billion a year, which is pretty close to the $44 billion that drunk driving costs the economy annually, according to data provided by The Zebra.

As a driver, it's important to remember that texting while behind the wheel not only puts your life at risk, it puts other people in danger. That's not worth it, and it's certainly not fair to anyone who gets hurt (or worse) due to your irresponsible actions.

So put your phone away while driving, or set it to "do not disturb" mode. If that's not an option, pull over in a safe place before you check or answer messages. That may be inconvenient, but it's far less inconvenient than a trip to the emergency room.

Employers carry some responsibility in this area too. It's important for managers to make it clear to your staff that you value their safety over everything else, and that they won't face reprisals for not answering messages fast enough.

In a more general sense, wise employers should help their employees create sensible boundaries between work and home. A lack of that clear differentiation can leave your people constantly edge, never truly relaxing. That can lead to burnout, which is bad for leaders and the led alike. What good is it to have employees who are always available if they're never functioning all that well?

There are very few true emergencies that can't wait until you're not driving. Unless your boss might be asking for the code that deactivates the bomb (and, let's be honest, that rarely comes up in most offices) it's probably fine to just wait until you get where you're going to check those messages.