Please ensure Javascript is enabled for purposes of website accessibility
Free Article Join Over 1 Million Premium Members And Get More In-Depth Stock Guidance and Research
By Daniel B. Kline - Jul 8, 2019 at 7:50AM

Your company might suffer if you don't make sure everyone has the tools to perform.

Anthony Davis has joined Lebron James and Kyle Kuzma as one of the Los Angeles Lakers. That gives the storied franchise one of the best, if not the best, starting three in the National Basketball Association (NBA).

Unfortunately for Lakers fans, NBA teams play five players at a time and generally need a rotation of seven or eight to truly compete. That means that on some level -- even though the team has three top-tier players -- it may be dragged down by its rotation, which will be comprised of castoffs, role players, and veterans willing to play for the minimum.

This same logic applies to small businesses and teams within larger companies. Even if you have top-tier performers on your team, it takes only one or two people "who make even small fumbles (miss deadlines, fail to make critical handoffs, work on the wrong priorities, etc.) to cut team performance by an average of 24%," according to a new survey from VitalSmarts, a leadership training company. 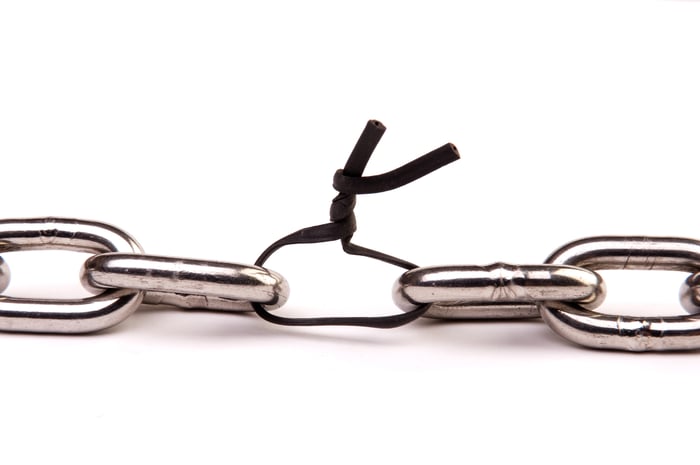 One weak link can cause an entire chain to fail. Image source: Getty Images.

Most of those surveyed reported that at least one person on their team made mistakes. In fact, nearly all (94%) said they had teammates who "lose track of things or miss deadlines because they fail to capture commitments and ideas" and 53% said their manager is guilty of that behavior.

The survey also showed that 91% of those surveyed said they have "teammates who spend too much time on the wrong priorities." That's something that 42% said their manager was guilty of.

These weak links can drag down overall team performance. In fact, the study showed that having just a single person guilty of one of the issues above can hurt morale and cause the overall team to suffer.

"We need to shift our thinking about what makes a valuable team member," said VitalSmarts Research vice president David Maxfield. "We often hire or select people for a team because of their experience or technical skills. However, this research shows no amount of knowledge or skills can make up for the harm a handful of poor productivity practices will have on team morale and results."

As the manager of a team or a small business owner, it's important that you focus on total team training. You also need to monitor what's happening so you can offer support for the weaker links on your team.

Many of the things that drag down team performance revolve around how employees spend their time. As a manager or owner, you need to work on keeping people focused on the most important tasks. It's also very important to step in before mistakes happen or deadlines get missed.

Every team has weak links. As the boss, it's important for you to offer support to the weakest members of your team in order to make sure that they do not drag down your stronger performers.