Please ensure Javascript is enabled for purposes of website accessibility
Log In Help Join The Motley Fool
Free Article Join Over 1 Million Premium Members And Get More In-Depth Stock Guidance and Research
By Daniel B. Kline – Aug 12, 2019 at 5:00PM

The numbers have exploded since 2005, an analysis shows.

Technology has made it easier for companies to allow people to work from home. With tools like Slack and videoconferencing, and the ubiquity of smartphones, telecommuting has become more viable and easier to manage.

Accordingly, the number of people who work remotely in the U.S. grew dramatically between 2005 and 2017, according to an analysis of the American Community Survey (ACS) by research firm Global Workplace Analytics and the job-search website FlexJobs. The ACS, which contains the most current U.S. government data available, showed the number of remote workers increased by 159% between 2005 and 2017. 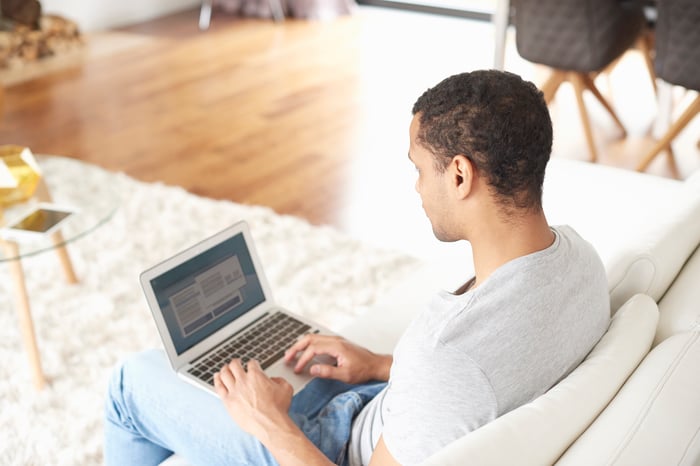 Telecommuting has all the comforts of home -- literally. Image source: Getty Images.

What do the numbers mean?

Working from home has become something companies have increasingly allowed and/or encouraged. The analysis defines "telecommuters" or "remote workers" as people who are not self-employed and who principally work from home at least half the time. Freelancers, business owners, and others who don't work as employees of companies don't count.

The analysis showed the growth in the number of remote employees has not only been significant but also steady. In addition, the data suggests the numbers have yet to peak.

"It's important to note that full-time and even half-time telecommuters are among the minority. A far larger portion of the workforce, about half, works from home at least once a month," said Global Workplace Analytics president Kate Lister in a press release accompanying the results of the analysis. "Talent shortages are fueling the growth of workplace flexibility right now because not only is it one of the most sought-after benefits among job seekers today, it also expands the talent pool by allowing employers to hire the best and the brightest from around the world."

Workers want to telecommute for obvious reasons. Taking the time spent getting to and from work out of the equation makes it possible to work more and have more personal time. It also ends the frustration of commuting and eases family problems like kids coming home from school to an empty house.

"With improvements to technology, and increasing demands from employees in a tight labor market, we fully expect to see the momentum around this important workplace trend continue to grow," said Sara Sutton, CEO of FlexJobs, which is devoted to remote, part-time, freelance, and other flexible jobs.

Companies that want to attract top-tier workers should consider offering some opportunities to work from home at least part of the time. It's a perk that workers want that can also benefit the company, not just through employee morale but by allowing for smaller offices and a lower infrastructure cost.

Allowing -- and even encouraging -- remote work can help create happy workers and make your company an employer that people want to work for. That can't be overlooked at a time when the country has a shortage of talented labor in so many fields that may get worse in the coming months.