Please ensure Javascript is enabled for purposes of website accessibility
Log In Help Join The Motley Fool
Free Article Join Over 1 Million Premium Members And Get More In-Depth Stock Guidance and Research
By Daniel B. Kline – Updated Sep 19, 2019 at 1:48PM

You'll spend less, and maybe even be healthier.

Technology, changing attitudes, and heavy competition for workers have made working from home more common. It's something many employees want to do, and more and more employers are either seeing the benefits or recognizing that they have to offer telecommuting as an option to attract top-tier employees.

For many who work from home (or those who would like to), not having a commute is a top benefit. In fact, 25% of respondents to a survey conducted for Airtasker, a gig economy jobs platform, admitted they had quit a job at some point in their career due to the commute.

Not having to get into a car or onto public transportation is a powerful incentive for people considering work-from-home jobs. But the lack of a commute is not the only benefit people who work from home cited. 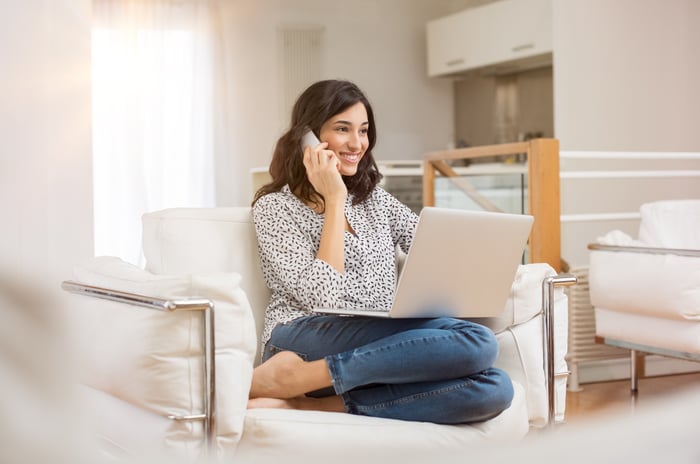 Working from home means not having to pay for a commute. Image source: Getty Images.

Save money and get healthier

When you don't have to commute to work, you don't have to spend money on gas getting to the office. That's a major benefit, as the remote workers surveyed said they saved an average of $4,523 on gas alone each year by working from home.

"This also equated to an extra 408 hours, or 17 days, of free time each year for not having to take the time to get from their home to an office," according to the report. "Seventeen days is more than many employees take [off] in a year. Even the biggest car enthusiasts would be hard-pressed to exchange their beloved driving time for that many days of (possibly paid) vacation."

People who work from home put some of that extra time into exercising. Respondents reported spending an average of 2 hours and 44 minutes doing some form of physical exercise each week, 25 minutes more than office-bound respondents.

Remote workers also reported that they worked more than office-bound peers (21.9 days a month vs. 20.5) and that they took slightly longer breaks (22 vs. 18 minutes). They make up for that, however, by having fewer unproductive minutes (27 vs. 37).

What can employers do?

Set parameters for working from home, even if it's something you only allow part of the time. If an employee has a doctor's appointment, family event, or something else that's easier to do from home, allow the flexibility for that to happen.

Make fair rules that treat all employees the same unless there is a compelling reason for someone to be treated differently. The person in charge of keeping the office computers running, for example, might be less able to work from home simply because their job is by nature office-based.

It's important to offer communication tools that allow for remote workers and in-office workers to easily communicate. That's not difficult to do when some of those tools are free or very low cost.

Employees who work from home, even part of the time, should hold up their end of the bargain. That means putting in the expected hours and being present for meetings and available for communication during work hours.

Working from home can benefit workers and employers if it's handled correctly. Doing that isn't hard, it just requires an open dialogue between both parties.