When it comes to the U.S. workforce, the "law" of supply and demand just isn't getting the job done. One might expect that with unemployment at a 50-year low, companies would be paying more to secure the workers they need to fill open positions, and to hold onto the people they have. Low worker supply plus relatively strong demand for employees should equal higher wages.

In most industries, that simply has not happened. Overall in the third quarter, average wages only increased by 0.5% from the second quarter, and 2.6% year over year, according to The PayScale Index. That anemic growth barely kept up with inflation, meaning in real terms, despite conditions that appear to be the most favorable for U.S. workers in decades, most of them are essentially treading water right now.

"Unemployment numbers hit a record low of 3.5 percent in September which was not surprising with job growth averaging 161,000 new jobs per month for the first nine months of the year," said Sudarshan Sampath, research director at the compensation software company PayScale, in a press release. "However, we are seeing this remarkable job growth now beginning to slow, as the economy loses some of its spark. We expect wage growth to remain at its steady rate in the coming months as a result." 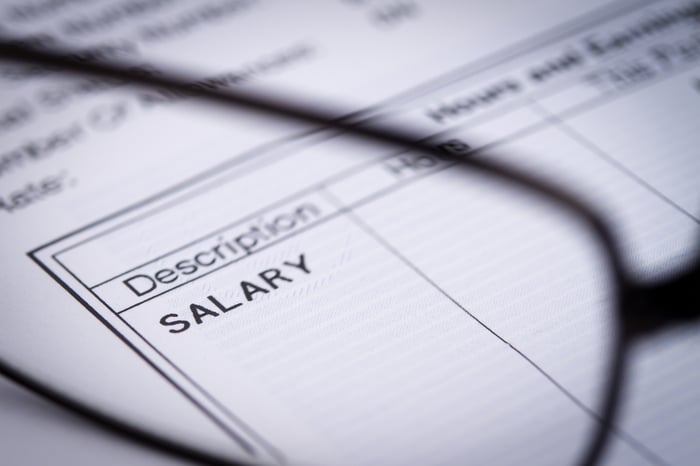 Wages may be rising but buying power is not. Image source: Getty Images.

Waiting on a rainy day?

The general tepidness of wage growth, however, can be traced to a few key factors. The first could be described as wage bias: Companies have long been slow to raise wages for certain types of jobs -- specifically, those perceived as being lower-skilled positions, in retail, restaurants, and in the back-end jobs that support those industries.

Some big retailers including Walmart, Target, and Amazon have boosted their base wages, but many of their rivals, as well as nearly the entire fast-food/fast-casual section of the restaurant industry, have held out. That's partly due to the second factor in play here: the looming threat and promise of automation.

So far, automation in retail -- think mobile-order-and-payment apps or cashier-free checkout lanes -- has not led to a significant degree of workforce reduction. That may change, however, if cheap labor remains in short supply. At some point, companies will prefer to invest more heavily in automation, with its steep upfront costs, rather than paying their rank-and-file employees more to do the work.

It's also possible that wage growth has been stagnant because companies generally take a glass-half-full view of the economy, or because they're attempting to hedge against economic downturns. It's harder to cut wages (which generally involves replacing current employees with cheaper alternatives) than it is to simply not raise people's pay in the first place.

The pay situation is worse than it looks

On the surface, you could look at the data and argue that while wage growth has been slow, at least the trend is moving in the right direction.

PayScale tracks wages in conjunction with inflation, as reflected by the Consumer Price Index. So its PayScale Index measures the real purchasing power of full-time U.S. private-sector workers. The numbers are clear.

Since 2006, wages have risen 15.1% overall in the U.S. But when you factor in inflation, "real wages" have actually fallen 9.6%. In other words, the income for a typical worker today buys them less than it did in 2006.

That means that if your income grew in line with the averages detailed above, you're worse off today than you were 13 years ago. The data also shows that for workers to get ahead over the next 13 or so years, employers would have to raise pay at a much faster rate than they're now doing.

As an individual, you can't control economic trends nor the pace of wage increases. If you're underpaid and want that to change, you'll have to take the initiative. Based on how the supply-and-demand equation has been playing out, that will probably require you to learn new skills that qualify you for a position in a field with higher wages. That's neither easy nor fast, but it's possible. And it's a more viable path to a bigger paycheck than waiting for market forces to force companies to pony up.