Please ensure Javascript is enabled for purposes of website accessibility
Log In Help Join The Motley Fool
Free Article Join Over 1 Million Premium Members And Get More In-Depth Stock Guidance and Research
By Craig LaChance - Updated May 9, 2019 at 4:39PM

The Supreme Court is considering whether iPhone users can bring an antitrust suit against Apple for excessive App Store fees. Does this case threaten the viability of tech platforms?

Antitrust law -- the area of law concerned with curbing monopolies and ensuring competitive markets -- is having a moment. A new generation of legal scholars, disparaged by some as the "Hipster Antitrust Movement," are raising questions about the size and power of iconic technology companies like Google (GOOG -2.45%), Facebook, and Apple (AAPL -3.71%).

Democratic Presidential candidate Elizabeth Warren has proposed an antitrust policy  aimed at "Restoring competition to the tech sector" by, among other things, prohibiting tech companies from both owning and participating in a platform. A tech platform is an online marketplace, controlled by a tech company, where buyers and sellers transact, like  eBay (EBAY -2.96%). As if on cue, the U.S. Supreme Court is considering a class action suit, Apple v. Pepper, in which the plaintiffs allege that Apple's App Store platform violates the federal antitrust laws. Many in the tech industry are concerned that this case could negatively impact Apple and tech platforms generally. Don't believe the hype. 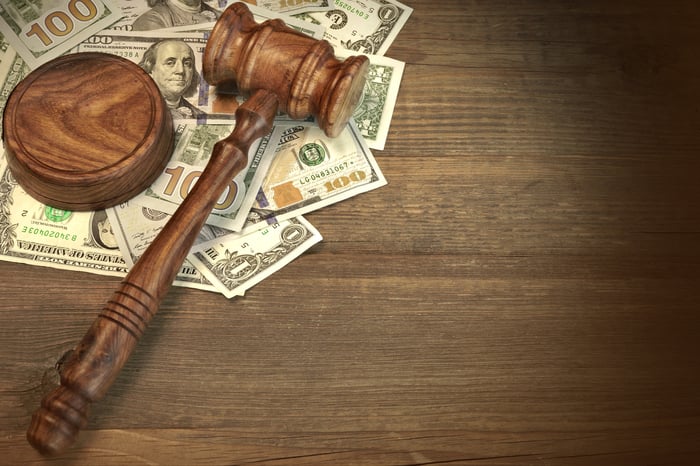 Apple's App Store is a platform where developers of iPhone apps sell the apps to iPhone users. Developers set the price for their apps, but, in exchange for access to the App Store, Apple takes 30% of the proceeds from each app sale . (For apps offering digital subscriptions, the commission drops to 15% after users have subscribed for one year.) Presumably, developers factor this 30% commission into the price of their apps and pass the cost on to iPhone users.

The plaintiffs in the Apple case, who are iPhone users, allege in their suit  that this arrangement is illegal. They contend that (1) Apple has monopolized the market for iPhone apps by mandating that apps only be purchased from the App Store, and (2) that Apple is using its power over the app market to charge developers excessive commissions, which harms consumers by driving up the retail price of apps.

Apple, however, argues  that the plaintiffs do not have standing to bring an antitrust suit against Apple. Standing is the right to make a legal claim, or in other words, the right to sue.  A plaintiff only has standing if (1) they have been harmed, and (2) the law under which they sue is intended to address that type of harm.

Apple contends that iPhone users fall outside the ambit of the antitrust laws. According to Apple, the suit really concerns the market for app distribution. The plaintiffs' complaint, Apple argues, is not that the company overcharges users for apps, but rather that it charges an excessive 30% distribution fee to developers, which is passed on to users. iPhone users, therefore, are only indirectly affected by the distribution arrangement. Previous Supreme Court cases hold  that only those who buy directly from a monopolist have a right to sue under the antitrust laws. Because iPhone users do not directly purchase app distribution services, the argument goes, they do not have standing to maintain an antitrust suit.

And so, the issue before the Supreme Court is very narrow: Do the plaintiffs have standing to bring an antitrust claim? The Court heard argument in November 2018. Although it is a fool's errand (pun intended) to predict the outcome of a case based on oral argument, the Court appeared to favor the plaintiffs.  The Justices questioned whether iPhone users who buy directly from the App Store can really be mere indirect purchasers   . A decision is expected this year.

How will this case affect Apple? If the Court rules in Apple's favor, it will simply affirm the status quo; Apple will not have to alter its platform arrangement. Over time, however, a ruling in Apple's favor could potentially lead to higher prices for users. If App Store purchasers lack standing  to bring an antitrust suit, then Apple (and other platforms) will feel less constrained in raising app prices.

But what if the Court rules against Apple? In the near term, a ruling against Apple will have negligible impact. The Apple case made it to the Supreme Court after a lower court dismissed the case for lack of standing.  There was no discovery, no trial, and the lower court never determined whether Apple actually violated the antitrust laws. Again, the only issue before the Court is the narrow standing question. If the court rules for the plaintiffs, then the case goes back to the trial court to determine whether Apple violated the law. Discovery and trial in an antitrust case can take years, so it would be a while before Apple had to pay a dime.

In the event this case goes back to the trial court and Apple is found liable, it could significantly impact the company. The antitrust laws allow plaintiffs to recover triple damages. Here, the plaintiffs have brought a class action on behalf of everyone who has purchased an iPhone app since 2007, which amounts to hundreds of millions of people. Since 2008, app developers have earned $120 billion in sales from the App Store. Assuming a 30% commission for these sales, Apple has collected over $35 billion. Apple's App Store revenue is a bright spot for investors, growing faster  than other parts of the company. If a court determines that even a percentage of Apple's commission violated the antitrust laws, Apple could be liable for tens of billions of dollars. That said, a massive judgment, while possible, is unlikely. It is extraordinarily difficult to prove antitrust liability, and Apple could settle for significantly less before the case even went to trial.

Impact on other tech platforms

Aside from the impact on Apple, many in the tech industry worry that a ruling for the plaintiffs on standing could have a pernicious effect  on tech platforms generally, like Google Play, StubHub, Amazon (AMZN -5.32%), Etsy (ETSY -8.02%), and LiveNation's (LYV -0.33%) Ticketmaster platform. For instance, the Computer & Communications Industry Association argues in a friend of the court brief  that allowing plaintiffs to bring an antitrust suit against a platform owner could make companies "less likely to offer or develop platform services in the future."

But businesses make this hyperbolic "I'm-gonna-take-my-ball-and-go-home" argument every time they are threatened with regulation. The tech industry is not going to abandon tech platforms if users can sue for antitrust violations; platforms are too profitable and there is enormous potential for growth. Indeed, the antitrust suit against Microsoft in the 1990s did not drive businesses away from the internet. If tech platforms want to avoid antitrust liability, they should focus on not engaging in anticompetitive conduct instead of denying users the right to sue. In fact, if a company cannot operate a platform without immunity from antitrust liability, then it should not be in the platform business. As Justice Brandeis wrote, the real test of a company "comes when success has to be struggled for; when natural or legal conditions limit the charges which may be made for the goods sold or services rendered."

Still, the tech industry's worries about antitrust liability are not illusory. The public is beginning to question the power of titanic tech companies. As Tim Wu, a Columbia Law professor has written  about the tech industry, "If there is a sector more ripe for reinvigoration of the big [antitrust enforcement] case tradition, I do not know it." Tech platforms may face an antitrust reckoning in the future. Nevertheless, the Apple case -- assuming the Court rules against Apple -- will likely be only a preliminary step in that reckoning, and it will not immediately upend Apple or the viability of tech platforms. If revenues are an indication, consumers like tech platforms. Even if the a court ultimately determines that Apple's App Store violates the antitrust laws, tech companies are not going to drop the platform business. Regardless of potential antitrust liability, platforms are here to stay.