Follow these four simple steps to learn how to compare companies.

Congratulations! If you're reading this article, then you're probably looking to invest in the stock market. Over the long run, there's no better way to reach financial independence. Before you get started, though, here's a quick primer on how to compare companies you might consider investing in.

To make this as simple as possible for the beginning investor, I've broken down the process into four steps. While this list is not all-encompassing, it should help you make more informed and confident investment choices. 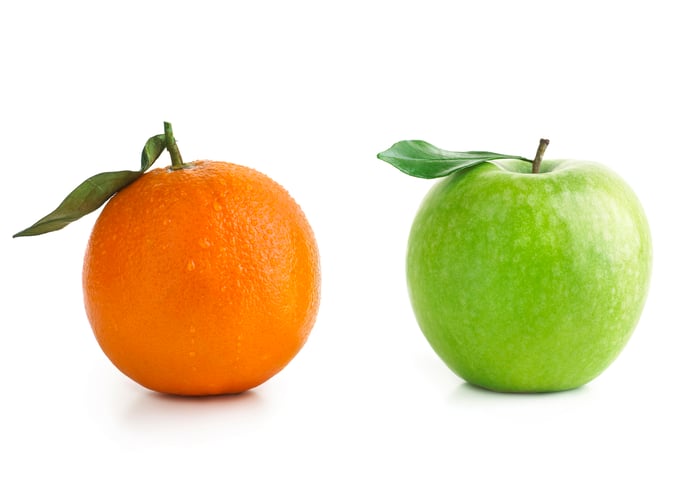 Step one: Stick to what you know
Sure, investing in a company that's on the cusp of creating the fastest and most efficient microchip ever sounds exciting. But unless you have some special expertise in that area, you're better off sticking with something else that you understand.

Warren Buffett, arguably the greatest investor of all time, avoids high-growth companies that fall outside his "circle of competence" -- that is, the scope of his knowledge and understanding. There's no reason you shouldn't do the same.

And among the companies you are familiar with, it's usually best to compare companies that operate in the same industry. You may be familiar with both Dunkin' Brands (DNKN) and Apple (AAPL -0.79%), but it's tough to compare a restaurant chain to the world's largest technology company.

Step two: Where is the business headed?
Investors like to focus solely on earnings, and sometimes this leads them to ignore aspects of the business that are more important to long-term investors, like whether a company's product is popular with customers. I like to measure this is by comparing growth in revenue and cash flow from operations.

Growth in revenue simply tells us how much more a company is getting from customers this year as compared to last year. If a company's product or service is a hit with customers, that number will be growing. However, revenue growth alone isn't cause for celebration. Sometimes companies end up spending lots of cash to make those extra sales, so they don't improve their profitability. Therefore it's also important to consider a company's cash flow from operations, which indicate the sustainability of the company's business model. This metric is also preferable to earnings, which are more prone to manipulation by management.

Let's compare Dunkin' Brands to the dominant player in the coffee industry, Starbucks (SBUX -1.39%). We can easily find each company's revenue and cash flow numbers by heading over to Yahoo! Finance and clicking on the "Income Statement" and "Cash Flow" tabs.

Here's what the results look like from 2012 to now:

Source: E*Trade. Starbucks' cash from operations backs out a one-time payment to Kraft.

Clearly, Starbucks has generated cash at a faster rate than Dunkin' Brands. That's an important distinction to make when comparing two companies. The same basic approach can be used in comparing any two companies within the same industry.

Step three: How do these companies' valuations compare?
With Starbucks growing faster than Dunkin' Brands, one would expect the company's stock to be more expensive -- but it's not as cut-and-dried as you might think.

A company's absolute stock price tells you almost nothing about how expensive the company is. It's far more useful to look at three different valuation tools: price-to-earnings ratio, or P/E; price-to-free cash flow ratio, or P/FCF; and price-to-earnings-growth ratio, or PEG. Each of these metrics is important to consider. Both P/E and P/FCF are backward-looking measurements, while the PEG ratio attempts to value a company based on how much it is expected to grow in the future.

The P/E and PEG ratios are easy to find on most finance websites, but you may need to determine P/FCF yourself. Free cash flow is calculated by taking the amount of cash a company makes from operations and subtracting capital expenditures. If you divide a company's market cap by this number, you get the P/FCF ratio.

Sticking with our example, here's how the two companies compare.

While Starbucks has a higher P/E, it still looks like a better deal based on the P/FCF and PEG ratios. Considering that Starbucks is clearly growing faster than Dunkin' Brands, this makes Starbucks' stock look even more appealing.

Groupon (GRPN -3.51%) was a great example of a "hot stock" without a sustainable competitive advantage. Leading up to the company's IPO, all anyone could talk about was what a great idea it was to negotiate huge numbers of deals that were good for both companies and consumers.

While Groupon was the first mover in this area, rivals quickly appeared to offer online deals at cheaper prices. On a local level, deals websites starting popping up in every major city, and even large companies like Amazon (AMZN -2.59%) got involved, offering daily deals. Those with a local focus could devote more time to a certain market than Groupon, while Amazon simply had more manpower to get the job done. Within a year of hitting the market, the company's stock lost a whopping 90% of its value.

Shifting to our previous example, both Dunkin' Brands and Starbucks have a number of sustainable competitive advantages: Their brands are well known and trusted, they're big enough to negotiate low prices from suppliers, and they both have a large installed base of locations -- though Starbucks is much larger.

As you can probably see, comparing two companies is part art and part science. While the metrics I've mentioned above are a great starting place, don't undervalue your own experiences with a company before deciding where to invest your money.