This measure of volatility is something many people look at but don't truly understand.

Everyone wants a way to predict the next market crash before it happens. The Chicago Board Options Exchange Volatility Index, also known as the CBOE VIX, has become increasingly popular as a gauge of investor anxiety in the market, with many investors tracking the VIX on a daily or even intraday basis to figure out whether a stock market downturn could be imminent.

Yet countless people don't really understand what the CBOE VIX represents, and therefore have made disastrous bets trying to use it in a predictive way. To help you avoid that mistake, let's take a closer look at the VIX, and what it really means for your investing strategy.

What the CBOE VIX tells you
Most people understand that the VIX is intended to reflect the level of volatility or fear in the market, but the exact mechanism the VIX uses to measure volatility is more complex. The goal of the Chicago Board Options Exchange was to tell market participants the expected amount of volatility during a 30-day target timeframe.

When it initially created the VIX in 1993, the CBOE used prices on options on the S&P 100 Index, a benchmark that includes the largest members of the S&P 500 (^GSPC 0.40%). In 2003, the CBOE switched to using options on the S&P 500 itself, and just last year, it added option prices not just from standard monthly options, but also from the new weekly expiring options, allowing more precise targeting of the 30-day window.

Getting into the details of calculating the VIX involves high-level math, but the basic idea is fairly simple. Options prices are based on several factors, one of which is the investor's expectation of how volatile the underlying market will be between now and the date on which the option expires. All other things being equal, if investors expect a flat market, they won't pay as much for options designed to profit from wide market swings. If they expect a big move, though, then options prices will go up even if everything else -- such as the current level of the underlying market index -- stays the same.

Predicting crashes and the problem with the CBOE VIX
In using the CBOE VIX as a predictive measure, investors argue that there's a link between volatility levels and subsequent market crashes. Indeed, you can see that spikes in the VIX usually correlate with big downturns in the market. 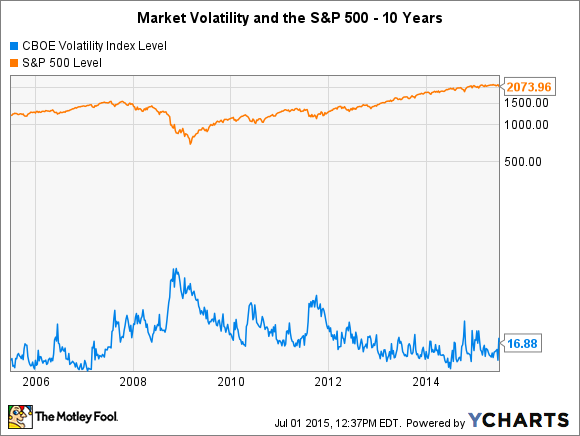 On a shorter-term basis, though, you'll find that the VIX tends to oscillate quite a bit, creating a lot of uncertainty in terms of just how big a move is enough to suggest a major downturn could be coming. At the same time, it can be difficult to figure out when to get back into the market even after a correct prediction based on the VIX.

For example, look at the chart above, and notice the big increases in volatility in 2006, 2010, and 2011. Those moves higher seemed substantial at the time, and in some cases, it did lead to a brief market downturn. Yet if you sold out of the market at those points, you missed out on some substantial gains following those signals.

At the same time, look at the 2008 VIX spike. Clearly, that looks like a successful prediction of the market meltdown during the financial crisis. However, the VIX hit its highs during October and November 2008, and the volatility level had fallen by half by the end of December.

By October and November, the market had already suffered some of its biggest losses, making it less than perfect as a way of avoiding portfolio pain. Even as volatility fell during December, however, the stock market was still poised to lose more than a quarter of its value by March, which suggests that the VIX doesn't do a great job of telling you when to get back into stocks even after what some might see as a good sell signal.

Perhaps most importantly, volatility-based investments don't necessarily let you mimic the month-to-month movements of the CBOE VIX. Because exchange-traded products like the iPath S&P 500 VIX ST Futures ETN (VXX) use futures contracts based on the VIX, they can lose money even when the VIX remains flat. The combination of the 30-day window for the VIX and the need to roll over expiring futures contracts constantly and replace them with new futures contracts creates friction that can kill your returns over long periods of time.

Anticipating a market crash can seem like an ideal profit opportunity. By itself, the CBOE VIX won't give you a perfect prediction of what the stock market is about to do; but it can nevertheless provide evidence regarding what other investors are thinking about current conditions, and offer at least one view of what the future might bring for stock investors.