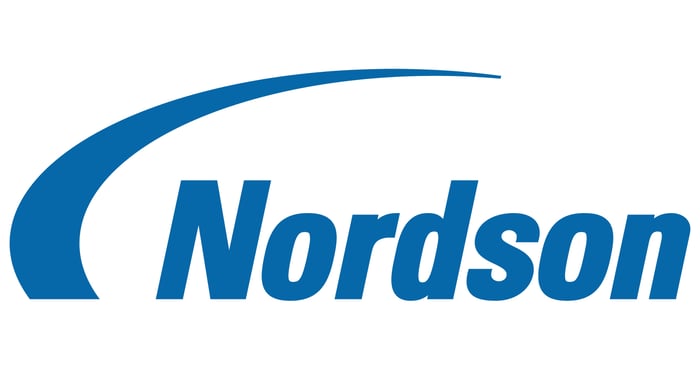 Nordson Corporation (NASDAQ:NDSN) released fiscal second-quarter 2016 results Monday after the market close. It's apparent the market is pleased, with shares of the adhesive-dispensing company up around 6% in extended trading -- and for good reason.

Quarterly revenue climbed 9.2% year over year, to $437.6 million, including 8% organic growth, a 2% contribution from the first-year effect of acquisitions, and a 1% negative headwind from foreign exchange rates. For perspective, Nordson's guidance called for top-line growth of 2% to 6%, including roughly the same contributions from acquisitions and currency headwinds, but much more modest organic growth of 1% to 5%.

Meanwhile, operating margin expanded 3 percentage points, to 28%, and would have been 29% adjusted to exclude one-time charges from Nordson's restructuring initiatives. This result was driven by both Nordson's strong revenue growth and ongoing "continuous improvement" margin expansion initiatives. Based on generally accepted accounting principles (GAAP), net income rose 43.4% year over year, to $70.6 million, and earnings per diluted share increased 53.8% year over year, to $1.23. Here again, Nordson's guidance called for lower operating margin of 19%, and GAAP earnings per share of just $0.85 to $0.95.

On a segment basis, sales volume at adhesive dispensing systems grew 9.3% on a currency-neutral basis, primarily driven by organic growth with less than 1% of that total related to the first-year effect of its acquisition of screw and cylinder manufacturer WAFO. Nordson CEO Michael Hilton noted that this marks the fourth straight quarter of "excellent organic growth" for the segment before adding, "Growth in the current quarter was broad based, as we generated strong organic growth in all product lines driven by consumer non-durable end markets."

Advanced technology segment sales volume climbed 23% year over year, driven by a 20% increase in organic volume and 3% growth from acquisitions. In this case, Hilton credited sustained momentum from last quarter in order rates and project activity, which translated to exceptional organic growth and improved operating margin across automated dispensing, test, and inspection solutions in electronic end markets, and continued strength in fluid management components for medical and industrial markets.

Finally, sales volume at the industrial coating systems segment fell 13% year over year, thanks to challenging comparisons to last year's second quarter, given softness in the U.S. and Japan. To Nordson's credit, Hilton explained, "Sequentially, sales volume in the current quarter increased at a pace more typical of this segment than the accelerated rate of a year ago."

Next, order rates for the 12-week period ending May 15 climbed 4% on a constant-currency basis. And backlog for the quarter ended April 30 was roughly $302 million, up 5% from this time one year ago, including 3% organic growth and 2% from acquisitions.

Looking ahead, Nordson anticipates that third-quarter 2016 revenue will increase 1% to 5%, or to an approximate range of $467.4 million to $485.9 million, including organic volume in the range of a 1% decline to 3% growth, 3% growth from acquisitions, and a 1% negative effect from foreign currency exchange. At the midpoint, that should result in operating margin of 24% and GAAP earnings per diluted share of $1.25 to $1.37. Even so, and though we don't pay much attention to Wall Street's near-term demands, analysts' consensus estimates predicted that Nordson would achieve third-quarter revenue of $473.8 million, or around $3 million below the midpoint of guidance, and earnings of just $1.23 per share.

Beyond this near-term view, we're continuing to execute on activities we expect will drive value for shareholders over the long term. Specifically, we continue to focus on innovative products, tiering, new applications, and emerging-market penetration to drive growth. We're also pleased to report that we're making solid progress on our previously announced margin enhancement initiative using tools within the Nordson Business System, and we remain on track to meet our goal of a 200-basis-points improvement to fiscal 2015 normalized operating margin by the end of fiscal 2017.

In the end, it's unclear whether Nordson was under-promising with the intention of over-delivering in Q2, especially given persistent macroeconomic headwinds which have held back growth over the past few quarters. But this is also a fairly cut-and-dry case of Nordson's exceeding expectations as it strives to improve margins and consistently deliver top-line growth ahead of GDP regardless of those headwinds. Combine that outperformance with Nordson's encouraging guidance, and it's no surprise to see shares trading higher today.