Please ensure Javascript is enabled for purposes of website accessibility
Log In Help Join The Motley Fool
Free Article Join Over 1 Million Premium Members And Get More In-Depth Stock Guidance and Research
By Ashraf Eassa - May 24, 2016 at 11:15AM

This Fool digs deeper into a claim from Intel's CEO.

I have written several columns discussing my concerns around microprocessor giant Intel's (INTC -2.17%) standing in the world of leading-edge logic manufacturing technology. In particular, I have been concerned that the company, which has long led its competitors in terms of performance and, arguably, transistor density, stands to lose this lead and potentially even fall behind foundry giant TSMC (TSM -0.04%).

During Intel's most recent shareholder meeting, I brought up my concerns around this. However, CEO Brian Krzanich assured investors that Intel's 14-nanometer technology will "still outperform any of the other technologies that'll be introduced in the next several years."

Although Krzanich and the individuals running Intel's chip manufacturing division likely have more insight into the matter than most people on the outside will, I don't know if I can accept it without some hard data. Here's why.

At the 22-nanometer technology node, Intel brought into high volume manufacturing a new transistor structure known as a FinFET. The details aren't important, but the bottom line is that FinFETs allow for better performance at lower power consumption than traditional "planar" transistors. 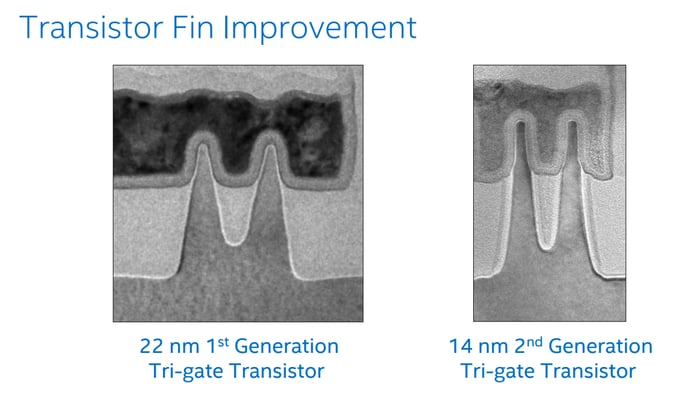 In a presentation from electronic design automation tool and IP vendor Synopsys (SNPS -1.26%) earlier this year, the company showed a very interesting slide: 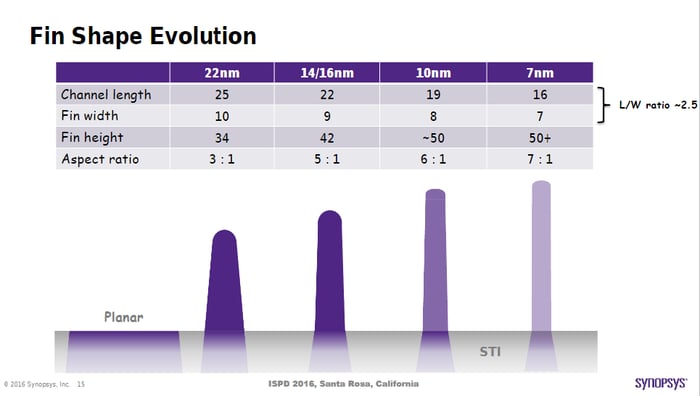 What's more interesting is that Synopsys says that at the 10-nanometer node, chip manufacturers will move to fin heights of approximately 50 nanometers and widths of 8 nanometers. And, at 7-nanometers, fin height goes above 50 nanometers.

Intel needs to flesh out its assertion a bit more

At this point, I think it's worth taking Krzanich's claim about Intel's 14-nanometer technology offering superior performance to "other technologies that'll be introduced over the next several years" with a healthy dose of skepticism.

Assuming that Intel dedicates a whole presentation to discussing transistor technology later this year at its investor meeting, there's actually a really easy way for the company to "prove" its claim: show some data.