Please ensure Javascript is enabled for purposes of website accessibility
Log In Help Join The Motley Fool
Free Article Join Over 1 Million Premium Members And Get More In-Depth Stock Guidance and Research
By Jordan Wathen - May 25, 2016 at 11:21AM

Berkshire's General Re gets a new executive as its industry threatens tougher competition.

At Berkshire Hathaway's (BRK.A 1.69%) (BRK.B 1.64%) 2016 annual meeting, and in his annual letter to shareholders, Warren Buffett warned that the results of the company's reinsurance business would be worse over the next 10 years than in the past. He doubled down on that view by reducing his investment in the industry, culling Berkshire's stake in publicly traded Munich Re, which Berkshire has held for years.

His warning on the industry is unfortunately timed. As Buffett predicts lower profitability for the industry, one of its greatest CEOs, Tad Montross, is stepping down from Berkshire-owned reinsurer General Re.

Montross may not be a household name, but he's been an incredible insurance executive. As the chart below shows, General Re's underwriting performance improved as he took on more responsibility at General Re. 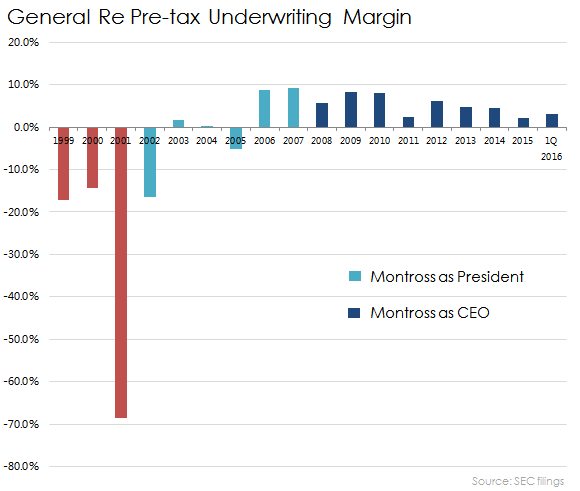 Buffett installed Joe Brandon as General Re's CEO and Tad Montross as its president in 2001 after the company endured devastating losses from the Sept. 11 terrorist attacks. A year later, Buffett wrote that the losses opened his eyes to "weaknesses in the company's operations" he should have noticed earlier.

Under Brandon and Montross, General Re's performance took a turn for the better. Montross became CEO in 2008, and the company put up an impressive eight consecutive years of underwriting profits. 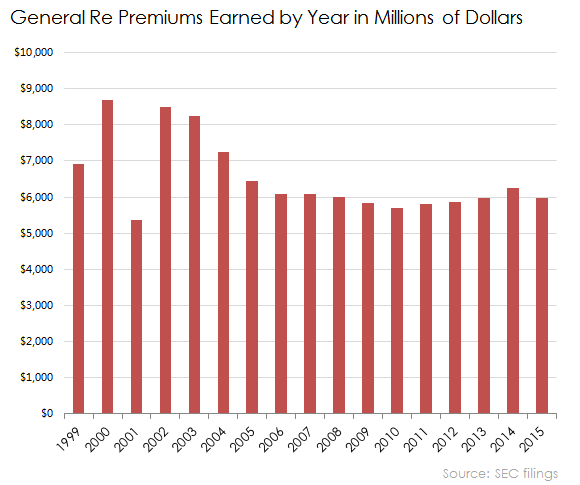 The truth is that it's never been easy for General Re. Ever since its 1998 acquisition, revenue has been trending lower, not higher. In an unfortunate twist, during years in which it earned the largest premiums, it also recorded the largest underwriting losses.

Montross, who reported directly to Warren Buffett, will be replaced by Kara Raiguel. One of Berkshire's other reinsurance stars, Ajit Jain, praised Raiguel in a memo to the reinsurer's employees, noting that she'd spend the next "90 days or so ... to determine how best to grow Gen Re's book of business without sacrificing" underwriting discipline.

Shareholders should have muted expectations. Given that one of General Re's best managers could only manage to tread water on the revenue line in favorable competitive environments, it seems almost impossible for Raiguel to grow General Re against tougher competition.