Please ensure Javascript is enabled for purposes of website accessibility
Log In Help Join The Motley Fool
Free Article Join Over 1 Million Premium Members And Get More In-Depth Stock Guidance and Research
By Matthew DiLallo - May 25, 2016 at 2:50PM

While oil and gas prices have been very volatile over the past couple of years, prices have started to show some signs of life in recent weeks. That's drawing investors back into the energy patch, which is clearly evident by the rally we've seen in energy stocks this year. That being said, despite the fact that oil and gas prices are rising, not every energy stock is a good buy right now. That's abundantly clear when comparing Cabot Oil & Gas (CTRA 0.21%) with Vanguard Natural Resources (NASDAQ: VNR).

Drilling down into the balance sheets

One of the most valuable lessons investors learned during the downturn is the importance of having a strong balance sheet. When comparing Cabot Oil & Gas with Vanguard Natural Resources, there's really no contest:

As that chart notes, Vanguard Natural Resources is weighed down by an enormous amount of debt, which is reflected in the fact that its credit rating implies the company could default on its debt at any moment. Most concerning is the fact that Vanguard Natural Resources has pretty much maxed out its credit facility, with the company borrowing $1.69 billion of its $1.78 billion in available credit as of the end of last quarter. Worse yet, its banks are in the process of redetermining that credit facility and will very likely cut its borrowing base below what it owes, triggering a repayment clause.

Meanwhile, Cabot Oil and Gas has very little debt for a company of its size. Further, it recently sold stock and used the funds to pay down its credit facility and bolster its cash position, leaving it with ample liquidity.

That better balance sheet makes Cabot the clear winner in this category.

Not only do Cabot Oil & Gas and Vanguard Natural Resources offer investors two entirely different credit profiles, but their portfolios couldn't be more dissimilar. Cabot, as the slide below shows, is entirely focused on just two shale plays: 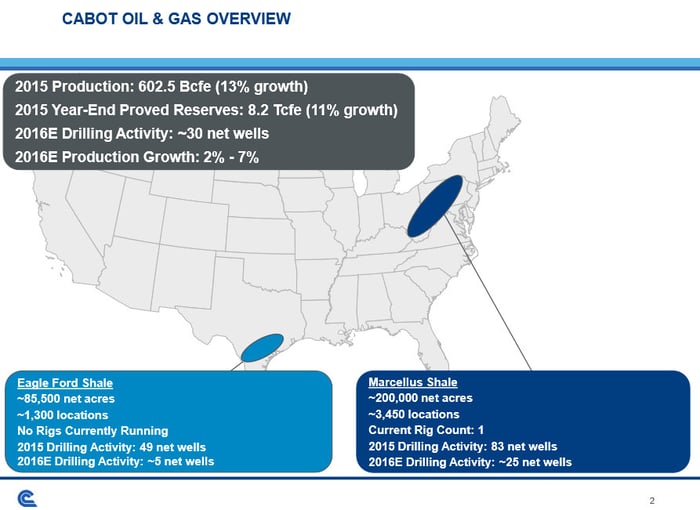 Vanguard Natural Resources, on the other hand, is much more diversified across a number of different production basins, as we can see from the map on the slide below: 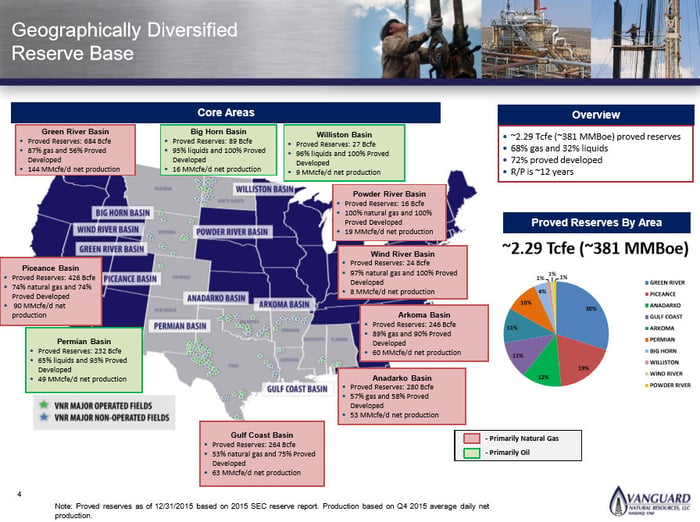 Vanguard Natural Resources scores points for having a diversified portfolio that's filled with primarily low-decline natural gas assets. That said, its assets don't provide anywhere near the upside of Cabot's assets, with it boasting thousands of future drilling locations that can be developed once oil and gas prices reach a certain point. That upside is lacking at Vanguard, which actually just sold its assets with the most compelling upside in order to pay down some of its debt.

This one could really go either way because some investors prefer stability, while others prefer upside.

Speaking of upside, there are two ways to look at the upside of these two companies. Because Vanguard Natural Resources has an enormous debt load, its unit price has been crushed over the past year, with it vastly underperforming Cabot's stock price: 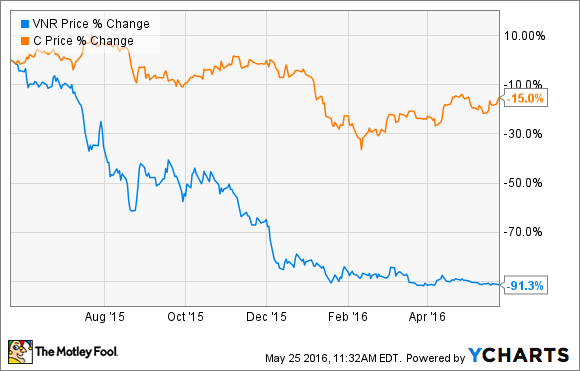 As such, Vanguard certainly has a lot of upside to recover that lost ground. However, given its debt concerns and limited liquidity, it's really a lottery ticket right now, with units having the potential to more than double, or go all the way to zero depending on commodity prices and credit availability.

Cabot Oil & Gas, on the other hand, has very strong upside as both commodity prices and its production increase, without the downside of the possibility of going all the way to zero.

Because I believe it's better to avoid binary situations like the one Vanguard is facing, I'd give Cabot the clear edge, here.

There's a real risk that Vanguard Natural Resources could go all the way to zero, especially considering  a number of its upstream MLP peers have recently filed for bankruptcy. That's why the clear choice between the two is Cabot Oil & Gas, which boasts a strong balance sheet and lots of upside as oil and gas prices improve.

This Oil and Gas Name is Supercharging Shareholder Returns