Please ensure Javascript is enabled for purposes of website accessibility
Log In Help Join The Motley Fool
Free Article Join Over 1 Million Premium Members And Get More In-Depth Stock Guidance and Research
By Dan Caplinger, Sean Williams, and Jason Hall - May 25, 2016 at 5:18PM

Investors understand that the opportunity for strong returns often comes with substantial risk. Some stocks are riskier than others, but shareholders hope that their willingness to take on added risk will allow them to reap bigger rewards down the line. We asked three Motley Fool contributors to come up with some higher-risk investment ideas that have strong potential. Take a look at what they had to say and see which one you think fits best with your investing strategy.

Jason Hall: It's been a rocky (and ugly) ride for investors in SolarCity Corp. (SCTY.DL) over the past year or so. The undisputed leader in both residential and commercial solar system installations, SolarCity has grown at an enormous rate over the past several years. But a changing regulatory landscape and slowing growth have scared plenty of investors into selling during the past year: 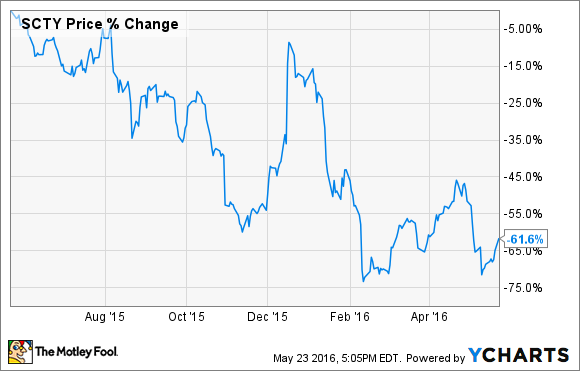 Furthermore SolarCity is burning through cash, relying heavily on the debt market to fund its growth, and doesn't expect to reach cash flow positive until the end of the year. That alone makes SolarCity a risky investment.

But at the same time, a number of big regulatory uncertainties have been addressed in recent months, and in a big way, SolarCity may be lower risk now than it's ever been. Federal tax credits were recently extended for several more years, while major solar states including California and Massachusetts have revised and extended their net metering policies, a favorable event for residential solar consumers in those states.

Yes, a money-losing company in an industry that's heavily dependent on government policies is inherently risky. But a strong (and growing) base of long-term contracted customers and massive growth prospects for the solar industry, along with the company's move into panel manufacturing soon, also mean tremendous possibilities. A lower stock price doesn't mean lower risk, but the sell-off does present a solid opportunity with enormous upside for long-term investors.

Dan Caplinger: When companies come under attack, shareholders generally suffer, and that has definitely been the case at BofI Holding (AX 0.70%), the company behind the online Bank of the Internet. Allegations have surrounded the bank for months, with the company's former auditor having filed a whistleblower suit that included claims of allegedly falsifying financial reports, misleading regulators about collecting tax identification information for customers, and even money-laundering allegations aimed at top executives. BofI Holding has answered those charges, but doubts still remain among investors, and that has kept the share price from rising.

Since then, BofI Holding has continued producing impressive financial results, with its latest quarterly report including a 65% rise in earnings per share and strong numbers throughout the business. Still, the company remains under attack by short-sellers, who are convinced that bad news will eventually stick.

Despite share buybacks, BofI Holding's stock price remains quite low. The stock is arguably high risk because there's the potential that allegations could turn out to have some basis in fact behind them. If you think that the attacks are unfounded, however, BofI Holding's stock could have a lot of upside if allegations against the company are proven false once and for all.

Sean Williams: Those with tolerance for volatility and the patience to wait for big gains to come over the long term are perfect candidates to invest in the biotechnology industry. Specifically, I would suggest checking out a predominantly clinical-stage drug developer like Ionis Pharmaceuticals (IONS 2.81%).

With the exception of Kynamro, a Food and Drug Administration-approved treatment for homozygous familial hypercholesterolemia that hasn't quite taken off as expected, Ionis is an entirely clinical-stage and pre-clinical company. This means it's liable to continue to lose money for some years to come, which makes an investment there, especially in a sideways or downward trending market, a bit risky.

However, Ionis has three tricks up its sleeve that could make it a perfect investment for long-term, risk-tolerant investors. First, it has incredible pipeline depth -- and when I say "incredible," I mean it. Currently, Ionis has 32 ongoing clinical-stage trials, many of which comprise novel therapeutics and not just one drug being tested in multiple indications. With that sort of diversity, one failed study doesn't mean all hope is lost.

Second, Ionis' drug development platform, which is based on its proprietary antisense technology, is unique. The antisense platform allows it to gauge how a therapy would be likely to react based on previous trials, which often means a quicker timetable from the lab to clinical trials. It also means that only the best molecules are moving into clinical studies.

Last, Ionis has a bounty of credible collaborations. To make up for the exorbitant cost of running 32 clinical studies, Ionis has partnered with nearly a dozen different drug developers. By forging licensing agreements, it gains access to up-front cash and milestone payments based on the development of its pipeline that sustains its working capital, while also leaving it with substantial royalty opportunities if some of its pipeline products are approved.

Ionis could well be profitable by the end of the decade, or perhaps even gobbled up by a bigger pharmaceutical company by then, making it an intriguing but high-risk investment worth considering.