Please ensure Javascript is enabled for purposes of website accessibility
Log In Help Join The Motley Fool
Free Article Join Over 1 Million Premium Members And Get More In-Depth Stock Guidance and Research
By Dan Caplinger - May 25, 2016 at 10:09AM

All three tobacco stocks have done well this year. Find out why.

Tobacco stocks have been long-term winners for shareholders who've stayed the course with them, and 2016 hasn't been an exception. Despite the usual challenges of regulation, litigation, and a secular decline in smoking rates, Altria Group (MO -0.17%), Philip Morris International (PM -0.24%), and Reynolds American (RAI) have all posted total returns in positive double-digit percentages so far in 2016. Although the three companies have many things in common, some factors are helping certain companies more than others. Let's take a closer look at all three tobacco giants to see why they've done so well so far this year. 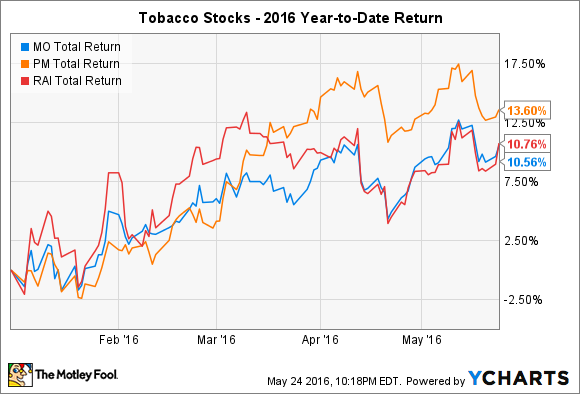 Altria has gained almost 11% so far in 2016, and part of what distinguishes it from its two tobacco peers is the breadth of its business. Under its corporate umbrella, Altria not only has its key Philip Morris USA tobacco business but also its smokeless tobacco unit, its wine business, and a minority interest in beer giant SABMiller. Smokeable products are the bread and butter for Altria's success, but its other businesses help diversify its exposure to some extent and also offer new avenues for potential growth. For instance, the pending deal for SABMiller to get acquired by Anheuser-Busch InBev will give Altria a substantial stake in the acquiring company, with its percentage share being smaller but with Anheuser-Busch being a much larger enterprise.

In addition, Altria has worked on maximizing its profitability. Moves like controlling costs with a $300 million productivity initiative and shoring up its balance sheet to get an improved bond rating are measures that can boost the bottom line and make Altria shares rise even more.

Philip Morris International is the winner of the three stocks, rising nearly 14% so far this year. What makes the gains more impressive is that the company has had to deal with plenty of challenges in its internationally focused business. Downward pressure from weak foreign currencies has stunted Philip Morris International's earnings growth, and a recent adverse decision from a U.K. court upholding plain packaging regulations extended a trend that has caught on across the world.

So far, pricing power and brand loyalty have been enough to sustain Philip Morris through tough times as it outperforms many of its global peers. Longer-term, Philip Morris is especially confident that its efforts to build a franchise based on reduced-risk products like its iQOS heat-not-burn tobacco system will produce growth to replace any loss in the traditional cigarette business.

Reynolds American has risen 11% in 2016, and the ongoing success of its acquisition of Lorillard continues to power the company forward. The integration of the Newport brand has gone well, and that has made the company an even stronger No. 2 challenger to Altria in the domestic tobacco market. The company has described the Lorillard merger as being "transformational" to its business. Newport in particular is responsible for 14% market share in the domestic tobacco market, coming close to matching the combined brand power of traditional Reynolds American brands Camel and Pall Mall.

Yet one of the biggest victories for Reynolds American has come from the super-premium market, where Natural American Spirit has been a surprisingly strong performer. By tapping into demand for higher-quality products, Reynolds American has created a franchise that could rival long-established brands at its competitors for years to come.

Tobacco stocks in general have performed quite well in 2016. As long as they can manage to keep growing earnings despite the challenges they face, tobacco giants are likely to deliver solid share-price performance and dividend income to their investors.