Please ensure Javascript is enabled for purposes of website accessibility
Log In Help Join The Motley Fool
Free Article Join Over 1 Million Premium Members And Get More In-Depth Stock Guidance and Research
By Brian Stoffel - May 26, 2016 at 9:03AM

I'd like to think that I'm a pretty open-minded guy. But in the game of investing, there are two types of stocks that I absolutely refuse to invest in. Both are rife with risk, and individual investors need to tread carefully before putting their hard earned cash behind them.

As far back as 2011, I've warned about the dangers of investing in for-profit education. Since then, here's how the stocks of the six companies included in that article have fared. 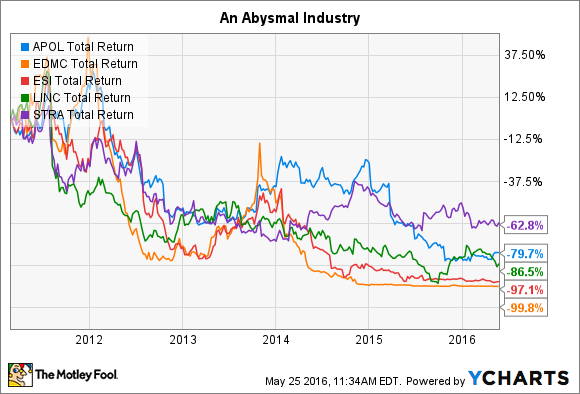 It's worth noting that the worst offender of the bunch, Corinthian Colleges, couldn't be included because it was forced into bankruptcy in 2015, leaving investors with nothing.

With such a horrific downfall, you might think that the industry is rife with deals, but I don't believe that's the case.

First and foremost, any investor in this industry is at the whim of the federal government. That's because the tuition bills are paid largely through Title IV student loans. In fact, at many of these schools, Title IV loans -- when combined with military loans -- account for well over 75% of overall revenue.

Furthermore, the results from for-profit players are questionable at best. Though tighter regulation under the Obama administration has led healthier practices (i.e., college counselors are no longer paid by commission on the number of students they bring in), for-profit students still have less favorable outcomes than their not-for-profit peers. They tend to drop out of school more regularly and have a tougher time finding a job even if they do graduate.

But perhaps the biggest threat is that what set for-profit schools apart -- online courses and flexible schedules -- is now becoming commonplace at traditional institutions of higher education. Because many of these institutions rely on state-run tax revenues and are not for profit, they offer far better tuition rates than for-profit rivals.

Add those factors together and you have a recipe for bad returns, even with these stocks having fallen so far from grace already.

I'm not against all technology stocks. In fact, tech stalwarts Alphabet, Baidu, and Facebook make up over one-third of my real-life holdings. Instead, I eschew investing in any technology company with the following three traits:

There are lots of companies that fit this bill, the most well-known being companies like InvenSense (INVN), Cirruc Logic (CRUS 2.95%), and Ambarella (AMBA 6.41%).

If those two customers for Ambarella don't look familiar, it's worth noting that a huge percentage of those sales flow through to action-camera maker GoPro.

In essence, any company that shares these traits has two major risks that aren't, in my humble opinion, worth taking.

First, by relying on one of two customers for such a huge percentage of revenues, all it takes is a decision by a single person at a single company to switch suppliers and these companies are in serious trouble. And even if such a decision is never made, if the end products that use this technology suffer (see GoPro cameras), demand for the underlying technology will dry up.

Also, the technology offered up by these companies can quickly become commoditized. Intellectual property patents can only provide so much of a moat. If deeper-pocketed rivals can offer a similar, in-house technology that's cheaper, then end users like Apple and GoPro are more likely to switch providers.

Already, Qualcomm and Intel are threatening Ambarella's turf, while STMicroelectronics offers up technology similar to InvenSense's.

While those with deep knowledge in this industry might find component suppliers with a reliable competitive advantage beyond intellectual property, individual investors would be wise to steer clear of such stocks.