Please ensure Javascript is enabled for purposes of website accessibility
Log In Help Join The Motley Fool
Free Article Join Over 1 Million Premium Members And Get More In-Depth Stock Guidance and Research
By Matthew Frankel, CFP® – May 26, 2016 at 9:47AM

This mortgage REIT pays an 11.2% dividend; but it isn't right for everyone.

Annaly pays high dividends, but beware of the risks.

According to the latest SEC filings, three billionaires that The Motley Fool tracks bought more than 9 million shares of mortgage REIT Annaly Capital Management (NLY 0.10%). While I don't believe in blindly following billionaires into their investments, it can certainly be interesting to watch. Let's take a look at Annaly, and see if it might be a good buy for you.

What does Annaly do?

Annaly Capital Management is a real estate investment trust (REIT) that invests in mortgages and mortgage-backed securities. The company's basic business model is to borrow money at low short-term rates, and buy mortgages that pay higher rates for long time periods, and profit from the difference. This is known as the net interest margin.

Annaly is the largest mortgage REIT, and is about twice the size of the next largest. Its size allows for efficient operations: Annaly's operating expenses are 51% lower than mREIT peers as a percentage of equity.

In addition, the portfolio is significantly more diversified than most of its peers. Annaly has fixed- and adjustable-rate mortgages, agency and non-agency mortgage backed securities, commercial loans, and more, all of which have different leverage ratios and business dynamics.

Great dividends, but too risky for some

It's easy to understand why billionaire investors may have been loading up on Annaly during the first quarter. For starters, it was cheap. As of this writing, Annaly trades for just 92.4% of its book value, and pays an 11.2% dividend yield. But during the first quarter, when the trades took place, these numbers were even more appealing. In fact, at its January low, Annaly traded for just 75% of book, and yielded nearly 14% based on that price. 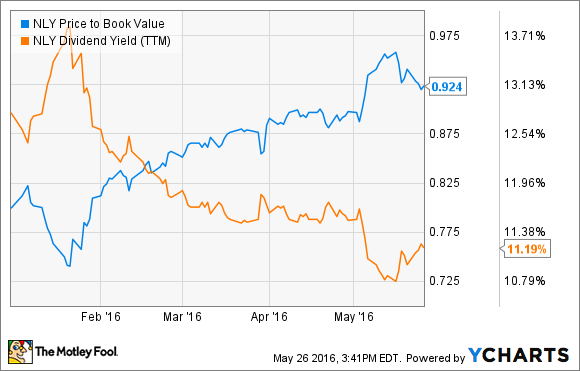 No stock that pays this kind of dividend is without risk, and Annaly certainly is no exception. The mREIT business model is quite lucrative when short-term interest rates are steady or falling, but can become disastrous in a rising-rate environment.

Annaly's business is much more complicated than this, but as a simplified example, let's say that the company can borrow at a short-term rate of 1%, and can buy 15-year mortgages that pay 3% interest, pocketing the 2% difference. If short-term rates rise to say, 2%, these 15-year mortgages in the company's portfolio only produce a 1% margin. If the rates were to spike to 3%, the profit disappears completely.

In fairness, mREITs have ways of hedging against rising rates, and Annaly is in a better position than most mREITs to absorb rate hikes. The current leverage ratio of 6.7-to-1 is actually relatively conservative for the sector, and the discount to book value should help cushion the blow if profits drop. Plus, the portfolio's diversification should help: For instance, once the company's acquisition of Hatteras is finalized, the portfolio will have a substantial amount of adjustable-rate mortgages, which, by definition, can offset the impact of higher rates.

Having said all that, interest-rate risk is still the primary risk factor for Annaly shareholders. To illustrate this, take a look at what happened to Annaly's share price (blue), and its dividend (orange), in 2013, when interest rates unexpectedly spiked (red). 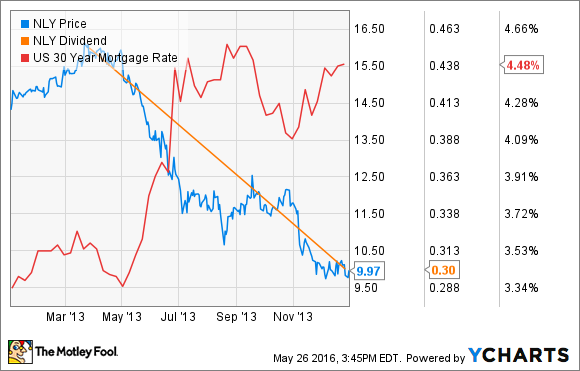 Is Annaly a buy?

I tend to believe that interest rates will stay lower for longer than many experts think, and if I'm right, Annaly could be a good buy even though the price has risen. However, this can be a volatile stock, and there's a real chance that rates could rise in the near future. If it happens rapidly, price and dividend action like you see in the last chart are certainly possible.

However, if you have a strong stomach and time to ride out the ups and downs, your investment could perform quite well over time. In fact, Annaly has historically generated such strong income that investors who bought into the company's 1997 IPO are sitting on a 596% total return, far greater than that of the S&P, even though the share price has actually dropped since the IPO.

Annaly is arguably best in breed when it comes to mREITs, but be sure you're aware of the risks if you decide to jump in. And if you do, I strongly suggest keeping investments like this to a small percentage of your total portfolio. Mortgage REITs are a bit too risky for my taste, but if you're going to buy shares of one, this may be the best choice.