Please ensure Javascript is enabled for purposes of website accessibility
Log In Help Join The Motley Fool
Free Article Join Over 1 Million Premium Members And Get More In-Depth Stock Guidance and Research
By Matthew DiLallo - May 26, 2016 at 2:39PM

These global logistics companies couldn’t be more different, which gives one the clear upper hand.

An ocean of opportunities exists for investors in global trade. However, not all options are created equal, which is certainly the case when comparing logistics companies Textainer Group Holdings (TGH 0.15%) and Nordic American Tankers (NAT -0.90%). Not only do these companies operate in completely different subsectors of global logistics, but their business models are polar opposites. That said, it's in these differences where you'll find what makes one stock a better buy.

Textainer Group Holdings is currently the world's largest lessor of intermodal containers, with more than 2 million containers. Nordic American Tankers, on the other hand, is one of the largest and fastest-growing oil tanker companies, with 30 vessels. It has taken years and a lot of money to build these large fleets, which is evident in the fact that both companies have borrowed a great deal of money to fund growth:

That said, as the above chart makes clear Nordic American Tankers has employed less leverage to build out its fleet, which makes it the winner in this category.

One of the reasons why Nordic American Tankers has used less debt to fund the buildout of its fleet is because of its business model, which is based on the following:

It's the company's decision to only operate in the spot market, instead of signing up its vessels under long-term contracts, that creates a lot of volatility in its cash flow. Because of that volatility, it employs less debt so it doesn't sink itself if spot rates were to remain weak for a long period of time.

Contrast this with Textainer, which typically leases its containers under long-term contracts, usually with an initial term of five years. This focus enables the company to earn fairly steady lease rental revenue during periods of volatility. That's very important right now given the current weakness in the container leasing market as only 8.5% of its leased fleet is facing leases that expire this year limiting its exposure to recharter risk at the bottom of the market.

Textainer's business model has enabled it to steadily grow its cash flow from operations as its fleet has grown whereas Nordic American Tankers' cash flow has been much more volatile: 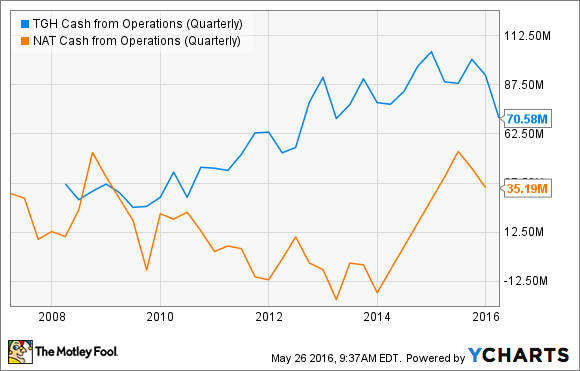 That stability amid the stormy seas of global trade is a big benefit, which is why Textainer scores the win for having the better business model.

As that chart indicated, Nordic American Tankers has enjoyed a recent surge in cash flow due to robust spot rates in the oil tanker market. That has enabled it to finally cash in on its growing fleet, which has grown from just three in 2004 to its current fleet of 28 operating vessels. That's important to point out when considering the company's upside because while its fleet has grown strongly over the past decade its cash flow hasn't until very recently. This implies that its upside isn't very predictable because it's completely predicated on the spot market, which could reverse course without notice. That is a concern because there could be a lot of pressure on spot prices over the next two years given that Nordic American Tankers and its rivals have placed orders for 97 new Suezmax vessels to be delivered by the end of next year, two of which are going to Nordic American Tankers, representing 21% of the total fleet.

The container leasing market, on the other hand, has been in a cyclical downturn over the past year due to slower than expected trade growth and falling steel prices. However, last quarter Textainer Group Holdings CEO Philip Brewer noted that the company was "starting to see some bright spots" in the market. Not only is trade expected to grow at a much faster rate than last year, but the price of steel is starting to increase. That suggests that there's upside on the horizon as that market recovers.

This divergence is reflected in the respective stock price performances over the past two years, with Nordic American Tankers following the oil tanker spot price higher while Textainer Group Holdings has followed the container market lower: 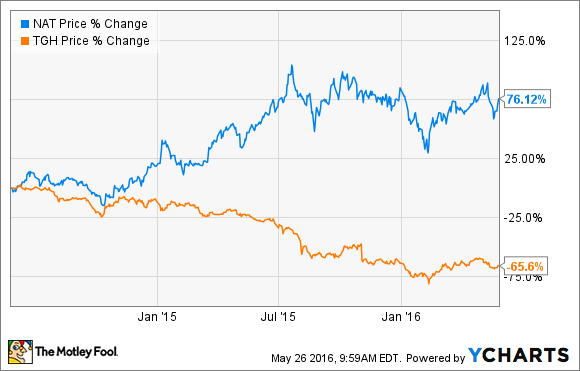 That said, because it appears that the spot market for oil tankers is nearing its peak while the container leasing market is nearing its bottom, there's more upside potential in Textainer.

With a combination of upside on the horizon and a business model built to weather cyclical markets, Textainer Group Holdings comes out ahead. That combination makes it, in my opinion, the better buy right now.