Please ensure Javascript is enabled for purposes of website accessibility
Log In Help Join The Motley Fool
Free Article Join Over 1 Million Premium Members And Get More In-Depth Stock Guidance and Research
By Daniel B. Kline - May 26, 2016 at 10:36AM

Low gas prices could benefit companies across the travel industry.

Americans plan to travel in near-record numbers this Memorial Day weekend, driving up sales for gas stations, airlines, and hotels.

More than 38 million Americans will take to planes, trains, and automobiles during the holiday weekend, according to AAA. That's the second-highest number of all time and the most since 2005, which the travel services group credits to gas prices being at their lowest point in more than a decade.

Low gas prices have saved Americans more than $15 billion in 2016 compared to the same period in 2015, according to AAA, and those savings will lead to more travel between Thursday, May 26 and Monday, May 30. That will be great for any industry that benefits from people getting behind the wheel, but it will also be good for hotels and airlines.

How are people going to travel?

Most travelers -- 34 million people, or 89% of the total -- plan to drive to their Memorial Day destination, up 2.1% from last year, according to AAA. More people will fly as well, with 2.6 million Americans planning to board planes during the holiday season -- a 1.6% jump over last year. And because cheap gas and low airfares have people willing to get into their cars or hop onto a plane, AAA wrote that other modes of transportation, including cruises, trains, and buses, will fall 2.3% to 1.6 million travelers.

"We won't discuss future bookings in detail but can say demand is strong for our low fares," Southwest Airlines (NYSE: LUV) spokesman Dan Landson told The Motley Fool via email. Landson also noted that his company has "had record traffic numbers," pointing to its April traffic report, which showed a 4.7% increase in revenue passenger miles for the month.

Southwest does not comment on future bookings, but the traffic report does predict a "modest increase" in its year-over-year second-quarter operating revenue, given that April included a record load factor (number of seats filled on its planes by paying customers) of 83.4%.

Landson said that Southwest carries one in four airplane passengers in the United States, and he addressed the one thing that could convince customers to avoid airports this holiday season: record waiting times at airline security, caused by Transportation Safety Authority (TSA) staffing shortages.

"Southwest continues to work collaboratively with the TSA and other agencies, developing solutions to help mitigate long TSA wait times," he wrote. "We're confident in the steps the Department of Homeland Security and TSA officials are taking to improve the airport security process."

Southwest is not alone in worrying that TSA problems will cause long security waits over the holiday weekend and throughout the summer. American Airlines (NASDAQ: AAL), Delta (NYSE: DAL), and United (NYSE: UAL) will spend about $4 million each during the summer travel season "for extra workers at their busiest airports to help manage lines and shuffle bins at checkpoints," Bloomberg reported.

The TSA issues don't seem to be dissuading travelers from flying, based on AAA's predictions. This may be because low fares are offsetting any worries about long security lines. Average airfares for the top 40 domestic flight routes will be 26% cheaper this Memorial Day, with an average round-trip ticket costing $165, according to AAA's Leisure Travel Index.

Jan D. Freitag, senior vice president of lodging insights for STR, a global provider of information services for the hotel industry, said that industry trends point to higher bookings during the holiday season.

"In the 12 months ending April the number of rooms sold in the U.S. is at an all time high," he told the Fool via email. "Q1 of the year was noticeably weaker but April data was very positive and we hope that the second half of the year will be supported by healthy group demand."

Freitag also noted that occupancy rates will be kept in check due to increased growth when it comes to room supply. He also noted that depressed oil prices, which cause the low cost of gas that's boosting holiday travel, has caused softness in the hotel business in Houston and other areas that have oil- or fracking-dependent economies.

Cheap oil and gas do not benefit the oil companies, and the added capacity offered by the hotel business has tempered any benefits increased travel offers to companies in the space. The real potential stock market winner in travel may well be the airlines, which can benefit from cheaper jet fuel while also passing on some (but not all) of the savings to their customers.

So far this has not been the case. All four major U.S. airlines have seen their share prices trending down over the last 90 days: 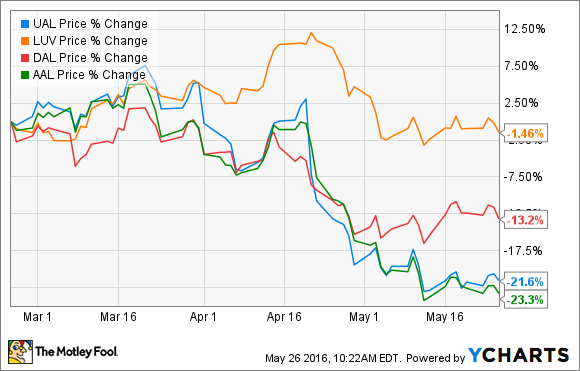 Positive holiday numbers and sustained low gas prices could change that. It's a question of whether airlines can inch prices higher and keep a little more of the fuel savings for themselves, given the intense competition over the most popular routes.

"In this industry, given its history of boom and bust, if you have one very good year, you really need to take advantage of it and get your house in order," John Heimlich, chief economist with the trade group Airlines For America, told NPR.

An increase in travelers makes that more likely for the industry, and if these trends, along with fuel prices, hold through the summer and into the fall, the airlines may by able to reverse the course of their falling shares.