Please ensure Javascript is enabled for purposes of website accessibility
Log In Help Join The Motley Fool
Free Article Join Over 1 Million Premium Members And Get More In-Depth Stock Guidance and Research
By Evan Niu, CFA - May 26, 2016 at 12:20PM

The software giant had high hopes for the smartphone market, but it shouldn't have.

Even without the benefit of hindsight, Microsoft (MSFT 1.07%) should have known better.

The software giant announced yesterday that it was further "streamlining" its phone business. That includes laying off 1,850 employees within the hardware division and recording a $950 million restructuring charge, which includes $200 million in severance payments. The majority of the positions (1,350) being eliminated are in Nokia's home country of Finland, while the remaining 500 will come from other parts of the world.

The news comes less than a year after Microsoft took a massive $7.6 billion charge last summer related to the Nokia acquisition. Sadly, the blockbuster acquisition from 2013 was doomed from the start.

When the deal was initially announced just three short years ago, Microsoft put together a presentation outlining the "strategic rationale" behind the acquisition. It included this incredibly optimistic and ambitious slide: 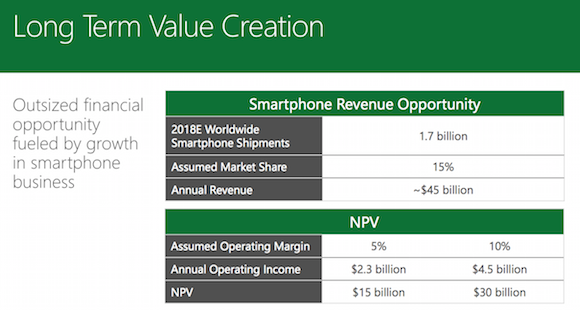 Within five years from the acquisition's announcement, Microsoft assumed that it could grab a solid 15% of the global smartphone market. At an estimated 1.7 billion units for 2018, that would translate into 255 million units. For context, there were a total of 11.1 million Windows Phones shipped last year, and Microsoft was 95% of that. In the first quarter, Microsoft's market share slipped below 1%.

The software giant wasn't particularly ambitious in terms of average selling prices though, recognizing that its few strengths in the smartphone market were mostly in lower-end market segments; Microsoft hoped those unit volumes would bring in $45 billion in revenue, for an ASP of around $176.

Microsoft also had high hopes for turning around the handset business' steep operating losses, which were necessary in order to reach a net present value (NPV) of $15 billion to $30 billion.

Almost no part of this goal was feasible beyond the modest ASP estimate. The iPhone currently holds about a 15% global market share, so Microsoft was essentially hoping that it could grow to be comparable to Apple, albeit from the other end of the market. Without those unit volumes and the associated operating leverage, there was no way that Microsoft could get the business to a 5% to 10% operating margin, either.

To be fair, none of this is CEO Satya Nadella's fault. He inherited the mess from his predecessor, and has much better ideas about Microsoft's long-term strategic direction. For the most part, investors are on his side, too; shares have gained over 40% since he was named CEO.

In an internal memo regarding the restructuring obtained by The Verge, Windows chief Terry Myerson says that the company is "not out" of smartphones, since it's too important of a category to give up on. Rather, going forward Microsoft is focusing on its broader Windows platform -- which sometimes requires a cross-platform strategy.

Microsoft's phone strategy will now emphasize enterprise customers and productivity services with offerings like mobile device management and development tools. This is an obvious pivot that truly does go back to Microsoft's foundational strengths. Instead of banking on some monumental volume growth, Microsoft can cross-sell mobility offerings to its massive enterprise customer base.