Please ensure Javascript is enabled for purposes of website accessibility
Log In Help Join The Motley Fool
Free Article Join Over 1 Million Premium Members And Get More In-Depth Stock Guidance and Research
By Brian Stoffel - May 26, 2016 at 3:09PM

While meeting short-term expectations is nice, a growing roster of Vault customers is the real key. 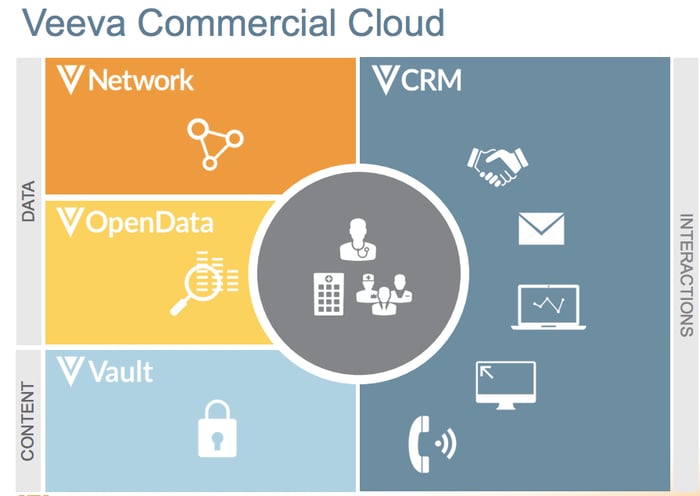 Medical cloud specialist Veeva Systems (VEEV -0.58%) is set to report earnings on Thursday after the market closes. Though the company has four broad product categories that it hopes to exploit over time, two of them make up the lion's share of revenue.

Veeva CRM helps pharmaceutical companies track and manage relationships with their customers and workforce, while Veeva Vault aims to streamline the entire process of getting a drug approved via the cloud.

Here's how revenue from the two segments have trended since going public in 2013.

The story here is relatively easy to follow: Investors want to see modest growth from CRM, while counting on Vault and other options to truly boost earnings -- thus justifying the 57 times trailing non-GAAP earnings price tag the stock enjoys.

We'll tackle what to look for in those two segments. But first, it's worth noting what expectations management set down for the report. While this is a relatively short-term issue, I find that it's worth noting if a company's leaders have an accurate pulse on their business and the industry they compete in.

What should we look for from CRM?

During Veeva's fiscal fourth quarter, revenue from CRM grew by 20%. Management expects this figure to grow by 15% throughout 2016, mostly through add-ons.

While this figure is important to watch, there are two metrics I'll be keeping a close eye on. First, while I understand that most growth from CRM is going to come via add-ons (the market is becoming saturated), I want to see Veeva grow its CRM customer list, if only incrementally. At the end of 2015, the company had 212 customers -- mostly pharmaceutical companies -- using its systems.

Second, I'll be listening closely to what management has to say about the success of offering add-ons. In particular, I think that Veeva's Approved E-mail offering is vital, as it makes the system stickier for end users. Last quarter, 30% of all CRM customers -- or roughly 64 -- were using Approved E-mail. I'd love to see that figure jump to somewhere between 70 and 80 customers.

Can Vault continue to deliver?

Management sure thinks the future is bright for Vault -- as well as OpenData and Network. Revenue grew by over 100% last year, and leadership sees 100%-plus growth from its non-CRM offerings again in 2016.

Again, management gave a breakdown of total customers using Vault last quarter: 219. It also they broke down how the three different sub-types of Vault were growing over time.

Clearly, customers are wooed by Clinical and its electronic trial master files (eTMFs). But if management offers specifics, I'm more interested to see how the company is able to grow all three of these sub-categories. If all three can grow, it would provide reliable evidence that the company's services are better than the competition, sticky, and have high switching costs.

All three of those are recipes for success for long-term shareholders...which is why I think this may be the most crucial factor for the future of the company. While the stock may react positively or negatively based on earnings, it's important to remember that Veeva is still in the early innings of its growth, and it is spending heavily to invest in these opportunities. The short-term profits are being sacrificed now to help capture an enormous market.