Please ensure Javascript is enabled for purposes of website accessibility
Log In Help Join The Motley Fool
Free Article Join Over 1 Million Premium Members And Get More In-Depth Stock Guidance and Research
By Adam Levine-Weinberg - May 26, 2016 at 1:05PM

Consistent operating performance is one of the keys to TJX's success.

Earlier this year, I argued that off-price giant TJX Companies (TJX 0.34%) is a better pick for long-term investors than its smaller rival Ross Stores (ROST 1.64%). At the time, I noted that TJX's international business was likely to be a major driver of growth and margin expansion in the coming years.

Last quarter, TJX showed that there's another thing setting it apart from Ross Stores: superior execution. This allowed TJX to post stronger profit growth than its rival despite facing big headwinds from its wage increase initiative and foreign currency exposure.

TJX sales and earnings take off

Steady growth has helped TJX nearly double its annual revenue over the past decade, surpassing $30 billion. This makes it one of the largest fashion retailers in the world. 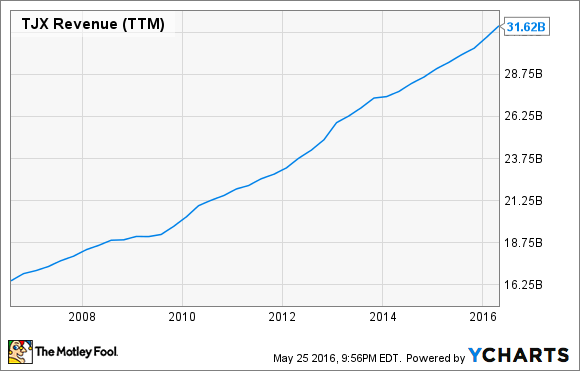 Last quarter, TJX recorded another increase in growth, with comp sales rising 7%. Most of this sales growth was driven by higher customer traffic. Meanwhile, the company increased its retail square footage by 5% year over year. As a result, total sales rose 10% year over year despite a 1 percentage point negative impact from the strong dollar.

The net result was that earnings per share increased 10% last quarter, from $0.69 to $0.76. Had the dollar remained flat against other currencies, EPS would have reached $0.81, up 17% year over year.

EPS rose a respectable 6% year over year at Ross Stores last quarter. However, Ross clearly underperformed its larger rival in most respects.

On the company's earnings call, management mentioned "merchandise execution issues" in the ladies apparel market. While Ross executives didn't provide much detail on the nature of these issues, it appears that the company didn't have the right colors and styles that customers wanted.

These merchandise problems will continue to disrupt Ross Stores' growth in Q2, and could even have some lingering effects in the second half of the year.

The value of consistency

Ross Stores hopes to fix its merchandise selection problems in the next few months and reinvigorate customer traffic by presenting a more compelling product assortment.

However, a big selling point of off-price retailers like TJX and Ross Stores is the "treasure hunt" experience: if you look hard enough, you can always find great deals on desirable products. If customers don't find anything they like, they won't return.

To put it a different way, it's easier for an off-price retailer to keep a regular customer than to win back a lapsed customer. Thus, there is a risk that a short-term slowdown in sales growth due to merchandise miscues could eventually morph into a longer-term decline in customer traffic.

TJX has been firing on all cylinders lately in terms of finding items that will excite shoppers. This consistency ensures that customers will keep coming back. As a result, TJX is well-positioned to continue gaining market share over the next decade.