Is Wal-Mart (NYSE:WMT) back?

That seemed to be the message from Wall Street after the retail giant cruised past first-quarter earnings estimates, leading the stock to post its biggest one-day gain since 2008.

After two straight quarters of reduced guidance, the market was thrilled with Wal-Mart's numbers, especially during a retail season when Target and department store chains got crushed. The big box store delivered earnings of $0.98 per share against estimates of $0.88, while same-store sales improved 1% with a 1.5% increase in traffic. That signals that Wal-Mart's efforts to improve store operations with higher employee wages and other initiatives are paying off.

Still, beyond the headline numbers, there was cause for concern. While Wal-Mart's earnings beat was impressive, the $0.98 was its lowest profit per share in the first quarter since 2011. Yes, a stronger dollar has put a damper on earnings growth, but aggressive share repurchases have also artificially inflated earnings per share. On a net income basis, this was Wally World's worst quarter since 2009.

Even worse, its profit margin has sunk near all-time lows, down to 3% over the last four quarters from close to 4% just a few years ago. 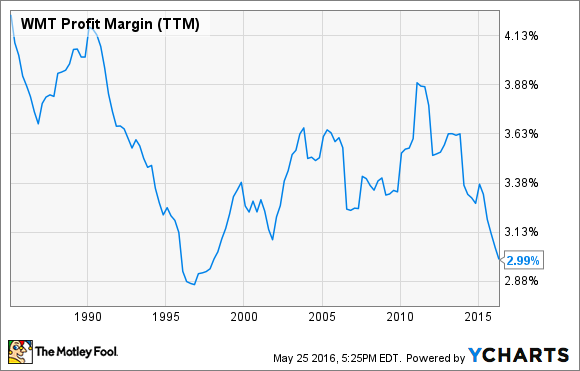 The company warned us about this, though. Management spent $2.7 billion in increased wages and training over this year and the last, and said at its annual meeting last October that "Fiscal 2017 (this year) will represent our heaviest investment period," projecting earnings per share to fall 6% to 12%. Following that, management expects earnings per share to be growing 5% to 10% by fiscal 2019. However, the increasingly difficult environment for Wal-Mart's brick-and-mortar peers, and the company's own investments, are enough to question whether its profit margin will actually recover.

In its recent earnings call, Wal-Mart signaled that its profit margin could actually be headed even lower. CEO Doug McMillion said the company would initiate its next phase of price investment, or lower prices, sooner than expected. "Over time, we intend to lower prices further in a deliberate, strategic way to drive our productivity loop," he said.

For years, Wal-Mart was known as the low-price leader in retail, but competitors like Amazon.com and Costco Wholesale have eroded, if not usurped, that advantage, and the company now must lower its stay in favor with consumers. While the decision to implement those price investments ahead of schedule is a signal that management believes stores are ready to handle increased traffic, the move is still likely to further compress margins. As other brick-and-mortar players tend to follow Wal-Mart's lead, both prices and profitability are likely to come down across the board.

A game of chicken

Wal-Mart has little choice here. The rules of retail have changed, and Amazon is writing them now. The e-commerce giant is content to operate at breakeven as it plows its cash flow back into infrastructure expansion, offering new services like Prime Now and enhanced benefits for its Prime loyalty program, among other improvements.

Amazon has already demonstrated with e-books that it's unafraid to sell products at a loss when it's in its strategic interest. The result seems to be a game of chicken between it and Wal-Mart and other price-conscious retailers where each will be forced to match the other.

Wal-Mart has to do what it takes to remain competitive. Preserving a 4% profit margin isn't an option, and neither is freezing the retail landscape in 2007. But with its latest report, McMillon's strategy finally seems to be paying off.

Wal-Mart has to spend to make prices competitive, to shore up its labor pool, and to invest in new projects like grocery pick-up. Its profit margin may never recover to its former heights, but it's making the right decision by putting customers first and building for the future.